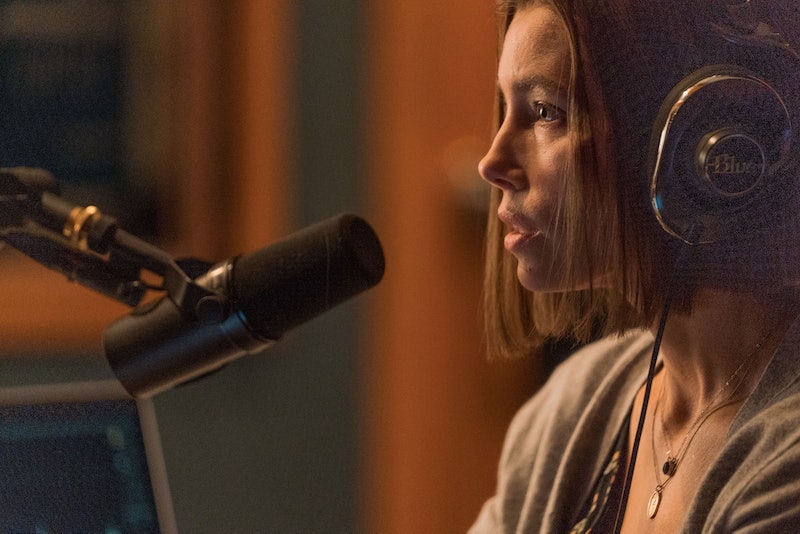 The mystery at the center of Limetown is about to entrance a whole new audience — in a whole new format. The first trailer for Limetown, starring Jessica Biel brings the terrifying tale of an entire town full of people who disappeared without a trace and the radio reporter who dedicated her life to unraveling the mystery to life for Facebook Watch.

Based on the hit podcast of the same title, Limetown follows American Public Radio journalist Lia Haddock (Biel) "as she unravels the mystery behind the disappearance of over 300 people at a neuroscience research community in Tennessee," according to the official synopsis. Describing the series as "mysterious and gripping," Limetown promises to keep Facebook Watch viewers on the edge of their seats with each episode.

Like the podcast — which ended on a cliffhanger, with Lia going missing after a particularly intense interview with a Limetown "survivor" — the show appears to center on the emotional distress that the investigation causes Lia. "You can't scare me!" Biel screams at one point in the clip, though by the end of the trailer, it seems like the mystery has taken its toll on her, as Lia screams into a pillow and punches herself in the face repeatedly.

As the trailer proceeds, however, it seems that the mystery of Limetown isn't just about a sudden, town-wide disappearance. Based on the cryptic warnings from the other characters, it seems as if Lia has stumbled onto some kind of terrifying conspiracy, one that people are willing to kill in order to protect. "You have no idea of what they're capable of," Stanley Tucci says, before Biel's character hears a source appear to get shot over the phone.

Limetown marks Biel's first television role since her Emmy-nominated performance in The Sinner. While she didn't appear in Season 2, Biel has remained as an executive producer on The Sinner, as well as producing Limetown. "I am most definitely drawn to stories that have strong female roles," Biel said in a 2018 interview for the USA Network, and her new role in Limetown definitely seems to fit that bill.

Limetown is giving the actor another opportunity to play a "strong female role," though it took some work to get her character there. Biel wants Limetown to expand on the character of Lia, and turn her from a narrator into a fully-fleshed person. "In the podcast, we don’t know much about her—where does she live and what does that look like? Is she dating anyone? … These are really important pieces that really bring her to life," Biel told Entertainment Weekly at the Toronto International Film Festival. "We picked pieces and worked through her psychology."

Though both Lia and the events of Limetown are fictional, Biel admitted that when she first listened to the podcast she was so entranced by the story that she thought it was based on true events. "I missed it, that the news cycle went so quickly, and we had so many crazy things that happened… And I was Googling and looking her up, looking up Limetown," Biel told EW about her reaction to the podcast. "I’m so embarrassed that I missed this thing. And then I called [executive producer] Michelle [Purple] and she said, 'No, no. It’s not real.' And I said, 'It is real!'"

The mystery of Limetown will likely entrance many more people when the show begins streaming on Facebook Watch with a two-episode premiere on Oct. 16.

More like this
Everything To Know About Netflix’s 'Never Have I Ever' Season 4
By Jack Irvin and Gabrielle Bondi
Meet The New Team Of Residents Joining 'Grey's Anatomy' In Season 19
By Brad Witter and Sophia Moore
An Ultimate Guide To The Music Of 'Rap Sh!t'
By Brad Witter
Josh Peck Shows Love To Jennette McCurdy After Her Shocking 'iCarly' Revelations
By Radhika Menon
Get Even More From Bustle — Sign Up For The Newsletter