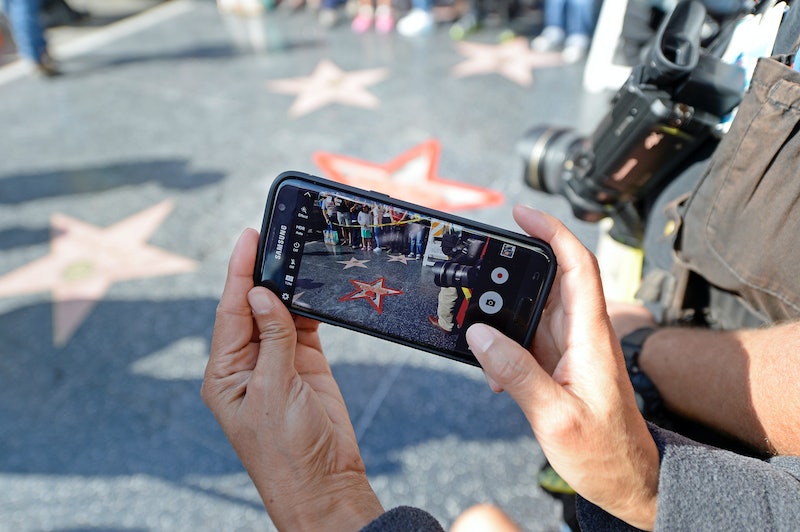 The Hollywood Walk of Fame might look a little bit different for the next few days, if you're paying attention: dozens of fake Trump Hollywood stars are all over the Walk of Fame, which appears to have happened overnight. The culprit of the act is a conservative street artist who wishes to remain anonymous, according to The Hollywood Reporter. As the outlet reported, the street artist's message behind the act was pointed: "Rip up the president's Walk of Fame star or try to have it removed — like you're the mayor of West Hollywood or something — and 30 more will pop up."

This act by the artist and his "crew," who call themselves "The Faction," comes in the wake of a unanimous decision made by the West Hollywood City Council to recommend the permanent removal of Trump's star, due to the widespread accusations of Trump's mistreatment of woman. The Faction reportedly spent $1,000 on the fake stars, which were printed on floor vinyl with adhesive backing, aka fancy stickers.

The Faction placed the Trump star stickers on empty tiles on the Walk of Fame, keeping all of the stickers covered until they were finished so that no one would know what they were doing.

The artist added to The Hollywood Reporter, "I didn't want to get hit over the head from behind. We thought Trump Derangement Syndrome was a joke, but I'm pretty sure it's real. If no one peels these off, they could last there for 10 years."

Of course, officials immediately began the process of removing the stars on Thursday morning. One nearby business employee told The Hollywood Reporter, "We didn't want to have what happened to the old star here. Not only would the star be destroyed, but it would damage our property."

It's unclear whether the Hollywood Chamber of Commerce and the Los Angeles City Council will continue with the process of replacing Trump's star, given the proposal by the West Hollywood City Council to remove it permanently, as well as the repeated controversial acts that have been committed for and against the star over the summer.

To CNN, Duran explained, "The West Hollywood City Council did not pass the resolution because Donald Trump is a conservative or a Republican. Earning a star on the Hollywood Walk of Fame is an honor. When one belittles and attacks minorities, immigrants, Muslims, people with disabilities or women -- the honor no longer exists."

Duran additionally pointed out that the Council has never before asked to remove a star. "Never have we intruded into our neighboring city's business like this," Duran said. "But the circumstances compelled us to make an exception to the rule."

The Hollywood Chamber of Commerce has confirmed that Trump's star (or perhaps the plans to replace the star) is "safe for the time being," CNN reports, though it has also confirmed that it will take the Council's vote into consideration at its next meeting.