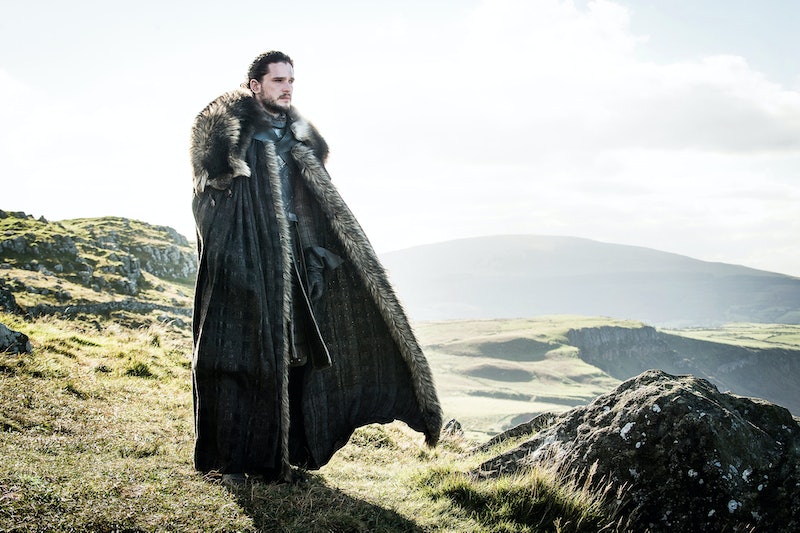 There's a lot to love about the current crop of Game of Thrones episodes, from the long-awaited reunions to the intense battles to the satisfying deaths. But if there's one common complaint about Game Of Thrones Season 7, it's that things are moving too fast. After six years of patient, sprawling storytelling, all of the show's disparate plot threads are suddenly converging at an alarming rate, with characters hopscotching across continents and entire fleets teleporting between seas. A lot of fans don't like this, but there's one person who would probably argue that this accelerated pace is a feature of the story's endgame, not a bug… and that person is none other than author George R.R. Martin.

The third novel in his A Song Of Ice And Fire series, A Storm Of Swords, begins with a page — even before the dedication and the detailed maps of Westeros and Essos — titled "A Note On Chronology." The letter, signed at the bottom by Martin himself, reads:

"A Song Of Ice And Fire is told through the eyes of characters who are sometimes hundreds or even thousands of miles apart from one another. Some chapters cover a day, some only an hour; others might span a fortnight, a month, half a year. With such a structure, the narrative cannot be strictly sequential; sometimes important things are happening simultaneously, a thousand leagues apart."

The type of dissonance that Martin is describing, which he uses in all of his novels, has been baked into the show's DNA since day one. In the very first episode of Thrones, viewers first saw Cersei commiserating with her brother Jaime over the corpse of Jon Arryn in the throne room of the Red Keep. The next time the Lannister siblings were on-screen, minutes later, they were parading into Winterfell after a journey viewers were told lasted "months." While Dany's dragons have grown from the size of kittens to the size of 747s over the past six years, Gilly's baby has somehow remained an infant for five seasons.

Exact timelines — and the temporal relationship between major events — has always been fuzzy on Thrones; so the fact that the Iron Fleet could ambush Yara's ships between Dragonstone and Dorne in one episode and then suddenly appear to lay siege to the Unsullied fleet outside Casterly Rock in the next shouldn't be that hard to believe. But why, then, if this kind of thing has been going on since the beginning of the show, does it suddenly feel so rushed and disjointed in Season 7?

It's probably because, for six years, Game Of Thrones was almost entirely about the journey, not the destination. That's why the series stranded Daenerys in Meereen for three seasons, why Arya parked herself in Braavos for two seasons, and why the Faith Militant briefly took over King's Landing before having their entire subplot wiped off the map in one fiery green explosion. The show, like the novels, hasn't rushed to its climactic conclusion. Rather, it has allowed its characters to enter narrative cul-de-sacs that may not lead directly to the endgame, but that force the characters to change and grow in surprising ways so that they're all different people when they meet again for the Great War.

Now, in Season 7 — with only 13 episodes left before the end — the show has finally arrived at its destination. Cersei is sitting on the Iron Throne, Daenerys has landed in Westeros, she has come face-to-face with Jon Snow, and the White Walkers are moments away from swooping down from the North and killing everything in their path. While the sudden absence of the journey may feel disorienting to the viewers (once upon a time, we may have actually seen some of Jon and Davos' journey from Winterfell to Dragonstone), it's equally disorienting to the characters.

And therein lies the key: what Martin said in the very first line of his note on chronology, that this story is "told through the eyes of the characters." After years of adversity, transformations, accomplishments, and setbacks, events are finally hurtling towards their inevitable conclusion… and the swiftness of the tide is catching everyone off guard, from the characters onscreen to the people watching from home. This quickened pace isn't a shortcut or a "cheat;" it's the reality of the world the characters are living in, as all their conflicting plans and ambitions begin to spiral faster and faster into a whirlpool that will likely spiral out of any attempts at control, and from which few of them will emerge unscathed.

On a lesser show, abruptly dispensing with the leisurely journey in exchange for indulging in the immediate action may be cause for great concern. But Game Of Thrones has been so meticulous in its character-building for the past six years — crafting some of the most truly compelling protagonists, antagonists, heroes, and antiheroes on television — that it's thrilling to suddenly watch them collide in new permutations and combinations. The groundwork has been laid, and now the payoff begins.