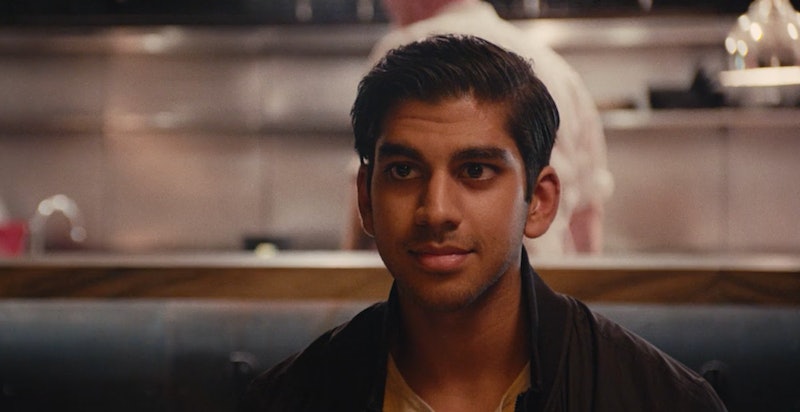 By now, Aziz Ansari's real parents have become regular guest stars on Master of None, but you may have missed another familial cameo in the show's newly released Season 2. Ansari's cousin, Harris Gani, stars in Master of None episode "Religion" as Navid, the Muslim cousin Dev takes to a barbecue pork feast when they're supposed to be fasting for Ramadan. It's a point of tension for Dev's devout parents, as eating pork is forbidden in their religion, but they eventually sort it out.

Now, this would normally just be a fun fact, but longtime fans of Ansari may recognize the name Harris. Ansari frequently mentioned him in his early stand-up sets, regaling the audience with stories of his college essay, Facebook rants, and Halo face-offs. Except then, he was referred to as his "chubby cousin Harris," and in Master of None, he has a body more akin to an action hero. “That’s a little Easter egg for people who’ve followed Aziz’s stand-up for a while,” series co-creator Alan Yang told Vulture. “Harris is looking very different these days!”

Recently, Gani took to Instagram to talk about his experience on the show, writing that it was something he thought he'd always say no to, given that he's a shy person, but was glad that he decided to take the plunge and put himself out there. He continued:

"Not only was it pretty awesome (and very funny) working with @azizansari and my Aunt and Uncle, but it was also great for my personal growth. To be honest, I was insanely nervous these past few days to see how people would react so thank you so much to everyone sending me all these super kind comments. You have no idea how much it means!"

Bustle caught the detail early, but it took the internet a little time to put things together, and once they did, hoo boy, people were excited.

More like this
'The Undeclared War' Took Inspiration From This Gavin & Stacey Location
By Maxine Harrison
'The Undeclared War' Is A Must-Watch For 'Black Mirror' Fans
By Maxine Harrison
Who Could Die In The Stranger Things Season 4 Finale?
By Kadin Burnett
Julie Andrews Revealed A Surprising Behind-The-Scenes 'Bridgerton' Detail
By Grace Wehniainen
Get Even More From Bustle — Sign Up For The Newsletter