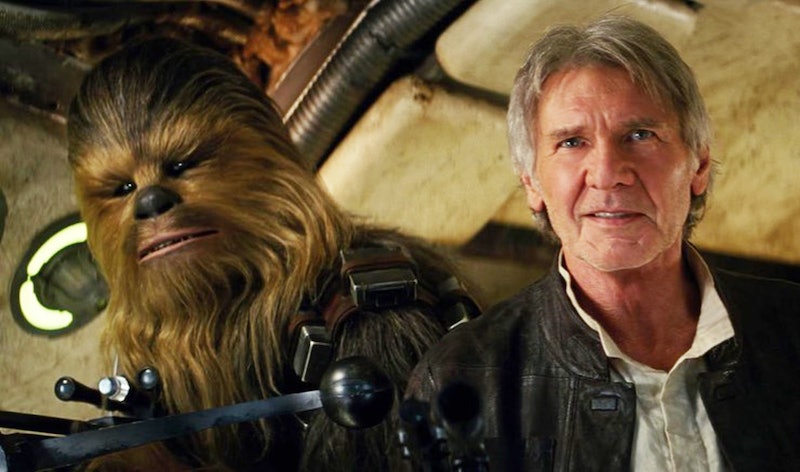 It's been a wacky 24 hours in the Star Wars fandom, now that some major details have dropped around the upcoming Han Solo standalone film. Among the plot points revealed by Disney CEO Bob Iger was the tiny detail that Han Solo's name isn't his real name. That's right: Han Solo is a made-up name for the famous intergalactic smuggler-turned-hero-turned-father of a rogue Jedi and possibly full-blown evil person. Upon learning this news, fan theories about Han Solo's real name popped up on Twitter, with jokes and snarky suggestions aplenty.

Plain and simple, this plot detail is surprising, because for the better part of 40 years, Star Wars fans have accepted that Han Solo is his actual name. I mean, it's not exactly uncommon for Star Wars to pull a switcheroo when it comes to real names versus fake names or new names. Darth Vader was once known as Anakin Skywalker. Kylo Ren used to be Ben Solo. When it comes to handling the heartbreak of learning that the name you thought was a truth was really a lie, Star Wars fans know how to cope.

Then again, this revelation that Han Solo is an assumed name has opened up the floodgates for hilarious speculation as to what Han's name could be. There's obviously a ton of comedic possibilities here, and one of the general vibes on Twitter is that whatever Han Solo's real name is, it's going to be just as cray-cray as Han Solo, because hello, this is Star Wars.

So, without much further ado, here is a ranking of the weirdest to strongest contenders for Han Solo's real name. Batten down the hatches, folks.

15. Does Han Solo Have A Connection To The President?

This would be the darkest of timelines.

You only do the Kessel Run in 12 parsecs once.

Maybe Han got the inspiration to change his name from a highly suspect politician?

11. This Suggestion Is A Riff On Star Wars Trivia

A jokey suggestion based on the infamous "Han shot first" moment in Star Wars Episode IV: A New Hope and an incident Han had at the cantina.

9. Han Solo Will Keep It Fancy

If you're going to have a fancy original name, it should rhyme and sound like a fast food chain. Duh.

8. Han Solo's Real Name Is As Weird As His Fake One

The Star Wars universe loves to name characters things that seemingly come out of a fantasy name generator. This occasion would be no different.

7. Is Han Solo Just A Pop Star In Disguise?

Stranger things have happened in the Star Wars universe.

6. His Real Name Could Be Meta

What if Han was named after one of the greatest living actors?

5. In A World Where Han Solo Could Be Connected To Batman

4. Han Solo's New Name Is Hiding His Dorky Side

It's not entirely outside the realm of possibility for Han to have been a nerd once.

I could totally see it happening.

2. Han's Name Comes From Deep In The Star Wars Fandom

Maybe Han is actually named after a character from another part of the Star Wars universe?

1. The Galaxy's Jock Equivalent Could Only Have This Name

It's such a natural fit it's a wonder George Lucas didn't think of it first.