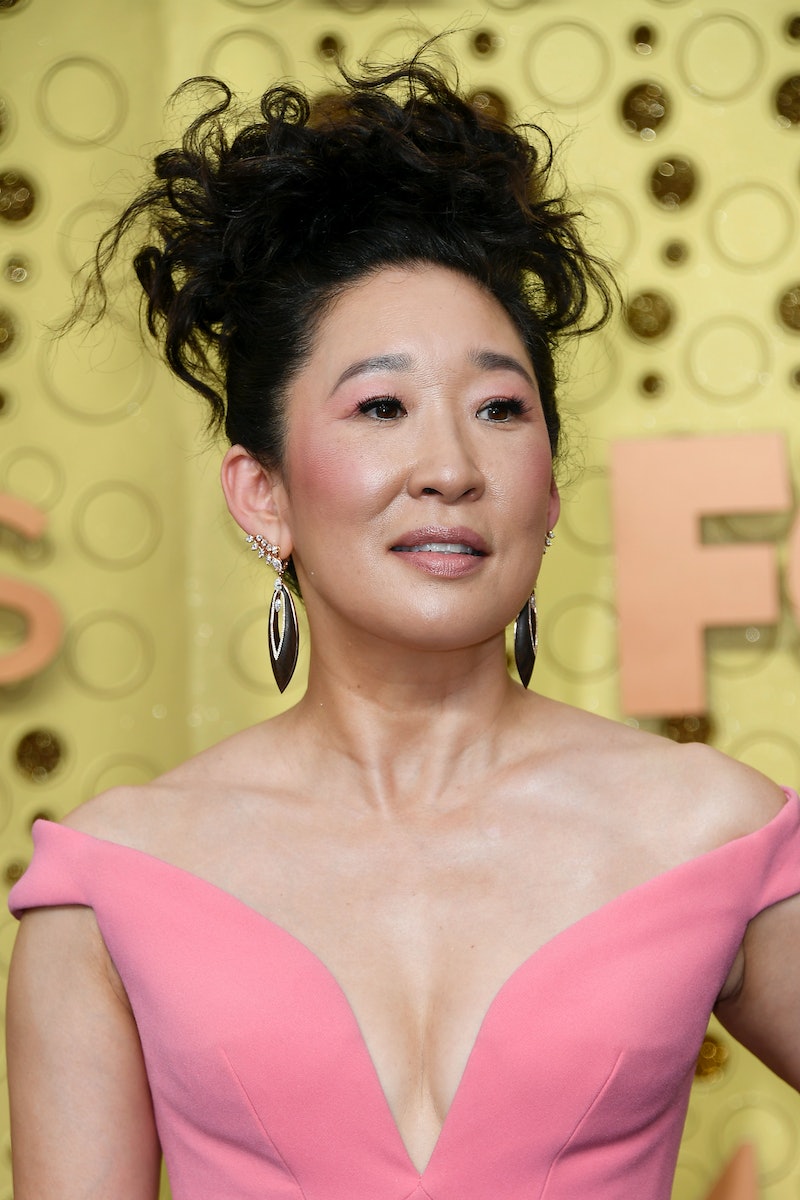 Is there anything better than when a star's outfit sparks fan theories? At the 2019 Emmys, Sandra Oh wore a bubblegum pink dress that fans immediately noted is essentially the same color as one of Villanelle's most iconic outfits on the show. The actor has scored her seventh, eighth, and ninth Emmy nominations this year, and she clearly came dressed to celebrate with a look that *might* have been inspired by Killing Eve itself.

I love a good theory, though this one might be a stretch: While the color is essentially the same, that's where the similarities between the two dresses come to an end. Villanelle's breezy frock was a short, sheer babydoll style by Molly Goddard. Oh's Emmys gown is a floor-length, bodycon style designed by Zac Posen. The actor doesn't wear pink often, but it certainly suits her. To complement the dress, Oh's team went with a rosy, monochromatic makeup look. Her hair — done by celebrity hair stylist Ted Gibson using products by Goldwell and VARIS — was pulled all the way up, which helped show off her cool, drop earrings and the sweetheart neckline on the gown.

Oh has talked about how she's been more excited to experiment with her personal style as she gets older — which could also explain wearing a color she hasn't often donned in the past. "I was more insecure when I was 20 than I am at 47," she told InStyle in an interview earlier this year. "At 47 it’s like, 'You need me to put on a crazy dress with mirrors [see photo above]? Yeah, sure. I’m going to work the sh*t out of this!'

Oh's Emmys look is just her most recent in a string of exciting red carpet outfits. At the Time 100 gala in April, the actor rocked a black gown complete with a feathery shoulder strap. Oh went one shouldered again for the SAG Awards in January, and wore three equally stunning outfits — from a bright red gown with a deep V to a white dress with golden sleeves — to host the Golden Globes.

In 2018, Oh made history as the first woman of Asian descent to ever be nominated for best lead actress in a drama series at the Emmys. She didn't win, but still recognized the moment as historic. "Let’s celebrate it, man," she told the New York Times when asked about her nomination. "It’s like, we’ve got to start somewhere. And I’m happy to get that ball rolling, because what I hope happens is that next year and the next year and the next year, we will have presence. And the presence will grow not only to Asian-Americans, you know, from yellow to brown, but to all our other sisters and brothers. Our First Nations sisters and brothers. Our sisters and brothers of different sizes and different shapes. If I can be a part of that change, like [expletive], yeah, let’s celebrate it."

This year, Killing Eve is up for three awards: Oh for Lead Actress In A Drama Series, Fiona Shaw (who plays Carolyn Martens) for Supporting Actress, and the show as a whole is nominated for Outstanding Drama. Now that Oh's been recognized for two years in a row, there's even more to celebrate.