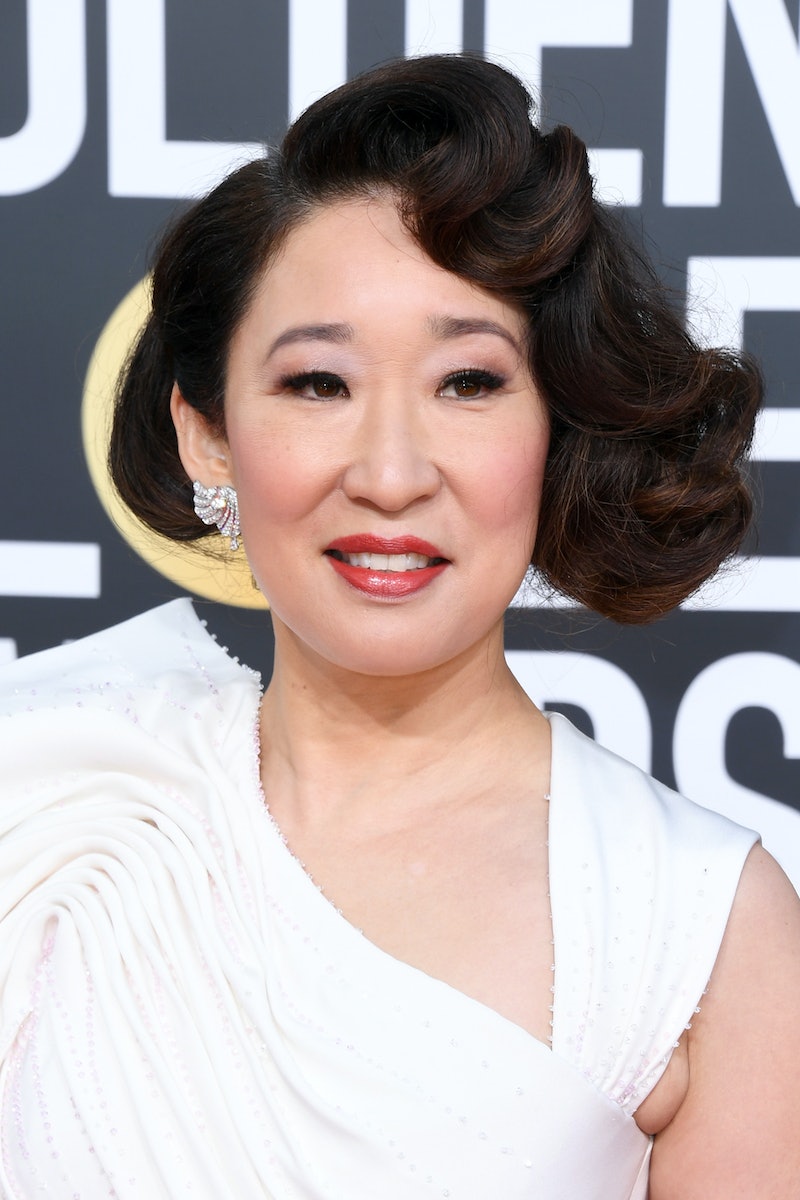 The 2019 Golden Globes spotlight is on Sandra Oh, as the actress and Killing Eve star not only won the award for Best Performance by an Actress in a Television Series award for her small screen performance in the show, but she also hosted the awards ceremony alongside comedian Andy Samberg.

To start off the night, Oh proved she was the belle of the ball, working with stylist Elizabeth Saltzman, according to People, hitting the red carpet wearing a floor-length white Versace gown with a puffed sleeve and subtle, soft pink beading. She paired the ensemble with a few chunky, silver bracelets and a pair of show-stopping statement earrings from Forevermark Diamond Jewelry. The star's hair was parted to the side and styled into a voluminous updo, complete with finger waves. For makeup, Oh rocked a smoky eye and light red lip — creating an old Hollywood glamour look to kick off the evening.

Of course, this was only the performer's first outfit of the night.

According to Saltzman, the actress will be rocking four looks in total for the evening, including two changes for the show, and another for the after-party, all from women designers.

"I called the women’s gang. I called Stella McCartney. I called Donatella Versace," the stylist told People. "She’s wearing all female designers, but that’s not a statement from her or from me. It was a way for me to think about her and how I respect her."

Oh proudly snagged up the Globe for her performance in Killing Eve this evening, thanking her parents while on stage. But this isn't the first time she's taken home the golden statue. The star took home her first ever Golden Globe award back in 2006 for playing Dr. Cristina Yang in the long-time medical series Grey's Anatomy. But although that iconic night took place over a decade ago, Oh's timeless, high-neck, cream Collette Dinnigan gown, with soft, metallic embellishments was one for the books. And even landed on The Fashion Spot's list of best Golden Globes Gowns of all time.

For her second look of the night, Oh stunned in a riveting red gown, that featured a blazer-like collar and a deep v-neck. She also boasted a bold red lip, pink blush, and kept her smoky eye from the red carpet.

The host let her hair down (literally) to present her first monologue alongside Samberg, where she spoke about celebrating how diverse the Golden Globe nominees are this year.

"I said yes to the fear of being on this stage tonight because I wanted to be here and look out onto this audience and witness this moment of change," Oh exclaimed. "I'm not fooling myself. Next year could be different and probably will be. But right now, this moment is real. Trust me, it is real. Because I see you. And I see you, all these faces of change, and now so will everyone else."

For her third and final look of the night, before heading out to the after party, Oh accepted her second Golden Globe award wearing a breathtaking boat neck white, floor-length gown with shimmering gold sleeves.

The two-time winner kept her red lip and smokey eye, but also threw on a pair of circular, sparkly earrings, along with a few statement rings.

Oh also made history tonight, according to CNN, as the first Asian woman to both host an awards show and win multiple Globes. During her emotional speech, the actress thanked her parents in English and Korean, both of whom were sitting in the audience.

"Mostly there are two people here tonight that I am so grateful that they are here with me, I’d like to thank my mother, my father," she said before taking a bow, and recognizing her parents in their native tongue.

The actress definitely had quite the night at the Globes. Not only did she take home the gold, but she did it all in style.