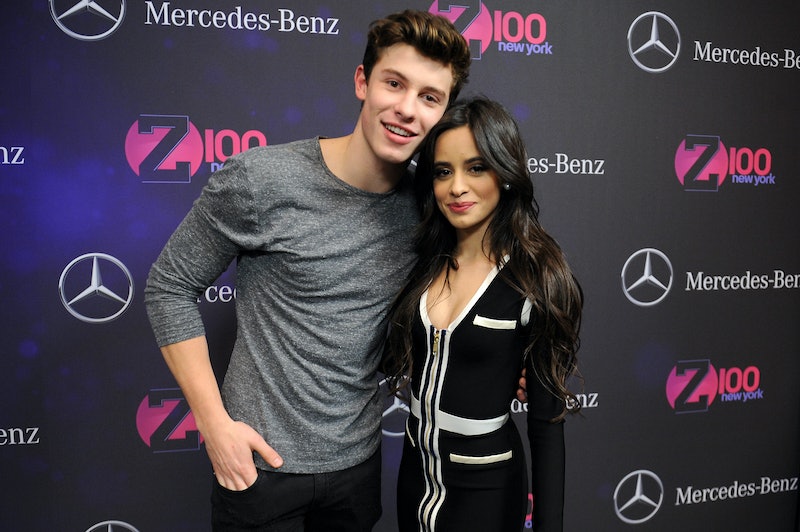 Two huge pop stars. One very steamy, new music video. Countless rumors about the nature of their relationship. So, are they dating or not? For now, that remains unclear. Fans want Shawn Mendes and Camila Cabello to date so badly, though, that they'll take any clue they can get. Case in point: The headline-making comment from Mendes' "mom" on one of Cabello's recent Instagram posts, which led some to believe that she was totally shipping the pair.

To clarify, Mendes' mom, Karen Rayment, didn't *actually* say that she supports the idea of her son and Cabello as an item. Well, she hasn't said that yet, at least. Confused? Understandable. Allow me to explain. On June 21, Cabello and Mendes released “Señorita," a super sexy song with an even sexier music video. While it was impossible to deny the on-screen chemistry between the two artists, Cabello was seemingly still dating her boyfriend of one year, Matthew Hussey, at the time. And then, suddenly, she wasn't.

On the same day that Us Weekly reported that Cabello and Hussey had decided to part ways, she posted a short clip to her Instagram account that featured some behind-the-scenes footage from the making of “Señorita." The video showed her and Mendes screaming and letting some energy out during rehearsals, and the whole thing was pretty cute.

"This is basically how I’m handling all of my feelings from now on hope it all works out @shawnmendes," Cabello captioned the clip. Naturally, tons of fans had something to say about the two, longtime "just friends," but one comment, in particular, really stood out.

In response to Cabello's video, an account claiming to be Mendes' mom commented with two emojis: First, a pink, heart-beating emoji. Second, the emoji with a girl on the left, a boy on the right, and a heart in between them. *Raises eyebrows* Oh, well isn't that interesting.

Fans and news outlets alike immediately jumped all over the comment. "So then #shawmila is real??" one shipper wrote, according to Us Weekly. "She approves," the outlet noticed another fan assumed.

Sadly, as it turns out, the account was fake, according to Cosmopolitan and iHeartRadio. Bummer, right? The whole thing is kind of confusing, though, because Mendes *does* follow the reported imposter — and if it is fake, it's a pretty convincing ruse. (Bustle reached out to Mendes' rep for comment on the situation, but did not receive an immediate response.)

The account has posts about what appears to be Rayment's actual real estate business. There are pictures of Rayment with her friends, up-close selfies with her family, and, of course, a few scattered photos of Mendes himself.

Is it a little odd that someone would go to such great lengths to pretend to be Mendes' mom? Yes. Very odd. Odd, but not exactly surprising. Fan culture can be really wild sometimes.

Anyway, regardless of whether or not Rayment does, in fact, ship Mendes and Cabello, for now, it seems as if she's keeping those thoughts to herself. Maybe. Unless the account is real. Again, it's all very confusing. Neither Mendes nor Cabello have openly admitted to having anything more than friend feelings for one another, though, so until that happens, fans will just have to keep dreaming.