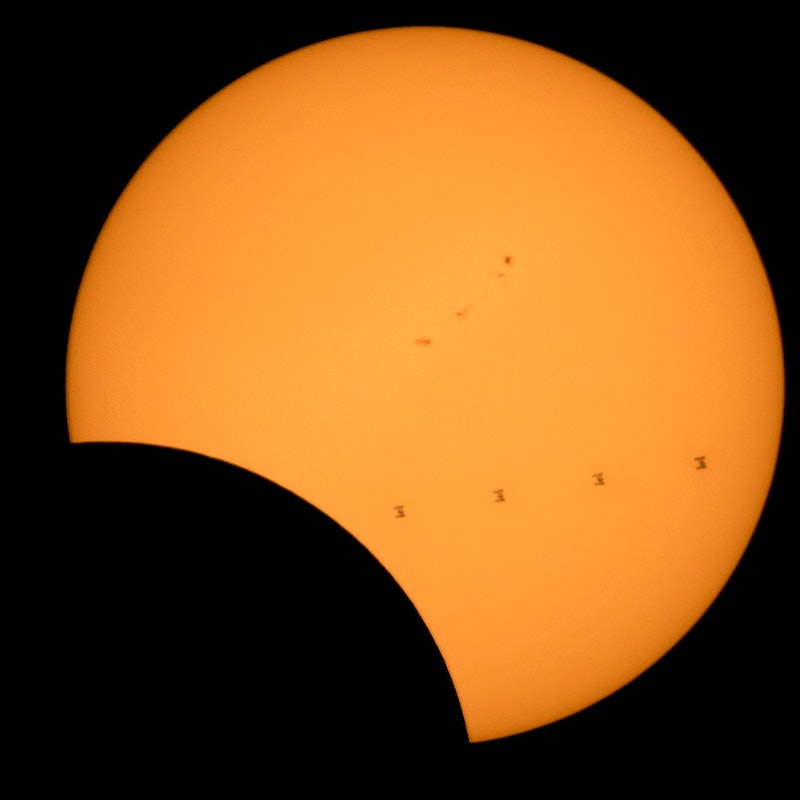 When a total solar eclipse rolls around, it seems like everyone suddenly takes an interest in what's happening with the cosmos. Such an eclipse is a major event, and the buzz around it can leave even the astronomy rookies among us itching to catch a glimpse of the moon blocking out the sun and convinced of its effects on our moods and behavior. While a partial solar eclipse might sound like it's less significant than its more complete counterpart, any solar eclipse can pack a punch — and they all have spiritual significance too. There are important spiritual meanings of the partial solar eclipse set to occur on Feb. 15, 2018.

If the concept of a partial solar eclipse is new to you, you're not the only one (after all, Bonnie Tyler didn't immortalize that variety in song) — but this astronomical event is basically just what it sounds like. Per Time and Date, the moon, sun, and Earth aren't quite perfectly aligned during a partial solar eclipse. The moon casts only the outer part of its shadow on the Earth, so what we see from here is what looks like a sun that's had a bite taken out of it by the moon. Picture a cool lunar Pac-Man. Said Pac-Man will be visible next on Feb. 15, 2018 starting at 1:55 p.m. EST, per Time and Date, and primarily from southern South America, Antarctica, and certain parts of the Atlantic and Pacific oceans.

Eclipses of all kinds are extremely spiritually significant, and the one we'll experience on Feb. 15 is no exception. Here are some of the ways in which these events are believed to carry spiritual weight.

Per Elite Daily, the time around a new moon and solar eclipse is ripe for turning inward and considering the kinds of changes you might want to make to your life and behavior. Prepare to demand more of yourself during this time and to greet challenges with a positive, confident attitude.

According to Siddha Yoga, eclipses are especially beneficial times for performing practices like chanting, meditation, and mantra repetition. Similarly, they're not ideal periods for what might be considered more active pursuits. Basically, this will be a great time to think about big steps you might want to take in your life... but not such a great time to actually take those steps. The more you can practice mindfulness during the eclipse, the more you'll amplify your inner light, per Rootlight.

Eclipses cause heightened levels of energy in both people and the environment, per Siddha Yoga. As a result, nature is thought to turn inward. For two or three days before and after the eclipse, you may notice that you have a decreased appetite and heightened emotions.

Solar eclipses tend to provoke a lot of external changes, which means that you might find new obstacles in your way as you take the early steps toward achieving those goals you've been meditating on. Elite Daily advises that you be prepared to dig deep so you can find a different way to achieve those goals.

Because the sun is categorized as a positive planet, solar eclipses are thought to initiative primarily positive things, according to Elite Daily. This moon event, therefore, marks the beginning of happy times and events. Cheers to that!