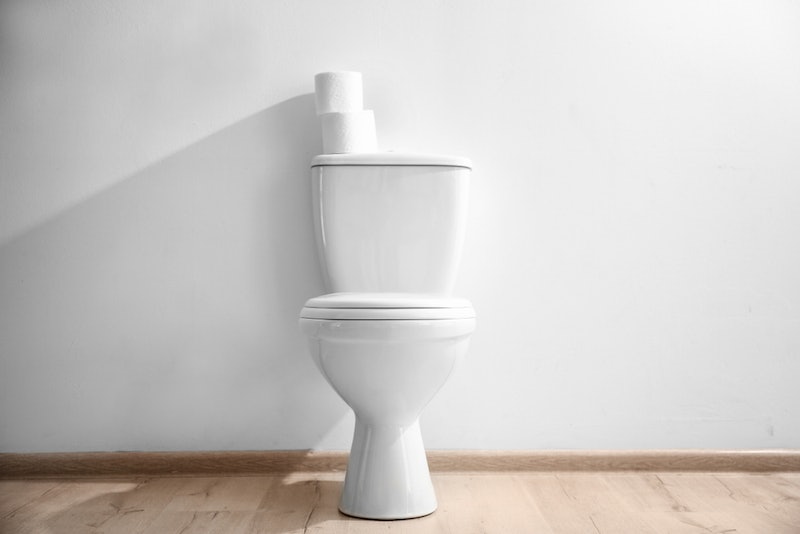 You're probably familiar with blood donation, or even bone marrow donation, but you might not realize that fecal donation — yep, that's poop donation — is a thing. Science is recently finding out, though, that fecal donation can be just as lifesaving as other kinds of medical donations. And if you get through the intensive screening process to be a poop donor, you might be able to help someone infected with one of the most dangerous bugs in America.

Fecal transplants, as they're called, are currently used as therapy for one particular illness. "Fecal microbiota transplant (FMT) is widely regarded as the most effective treatment for recurrent Clostridium difficile (C. diff), a dangerous bacterium that can cause symptoms ranging from diarrhea to life-threatening inflammation of the colon," writes Breanna McSweeney, a medical student who surveyed international attitudes towards stool donation in 2018, for Everyday Health. C. diff is a serious problem, and tends to happen when people are given antibiotics that disrupt their gut bacteria.

It's also getting worse. Nearly 500,000 people experience C. diff symptoms in the U.S. every year, according to the Mayo Clinic, and it's become more widespread over the past few years. The Center for Disease Control reported in 2015 that 29,000 people nationally had died from C.diff in the previous 12 months, and studies have found that C. diff is becoming more resistant to antibiotic remedies. Which is where fecal transplants come in.

When antibiotics don't work, poop can help. The idea of giving people with serious recurrent C.diff fecal transplants — effectively, healthy poop that replaces their unhealthy microbe balance with a better one — first popped up in the 2010s, and it's been very effective. The first trial of fecal transplants in 2013, says University of Michigan Health, "had to be stopped because patients treated with [fecal transplants] had a cure rate in the order of 90 percent or above. Patients who were on medication were having a 20 to 30 percent success rate." It was actually thought to be unfair not to give everybody on the trial a fecal transplant. And a Norwegian experiment with fecal transplants in 2018 cured five out of nine people with C.diff immediately. Three of the remaining four patients were cured with a follow-up course of antibiotics.

So fecal transplants work. But where does the poop come from? "To make this therapy readily available, it is vital to have a large bank of healthy stool donors. Unfortunately, potential donors can be very difficult to recruit and retain," explains McSweeney. And that's where you might come in.

Donating poo isn't like giving blood. Carolyn Edelstein, head of stool donation company OpenBiome, told the New York Times in 2018, "Only about three percent make it through our screening process. We like to joke with our donors that it's easier to get into Harvard or M.I.T. than be a stool donor." It's very important for the gut microbiome of donors to be just right, without anything that might cause havoc when introduced into a sick person's colon. And for that reason, screening is very intensive — but can be very fruitful.

A study published in Frontiers in Cellular and Infection Microbiology on Jan. 21 found that some people are "super poopers," and that their poop donations could help people sick with C. diff, diabetes, or IBS, Jackie Flynn Mogensen writing for Mother Jones reports. It's not clear what would make a "super" donor, but having a very diverse range of bacteria in the gut seems to help.

Stool donation is still very new, so experts are working out the best way to test your poo to check if it's suitable. A review in 2017 found that it's recommended that "potential donors undergo initial screening using a questionnaire analogous to those provided to blood donors." If you show any symptoms of infection, or might have risk factors for getting an infection, you'll likely also be left out. "Neurological or metabolic disorders, malignancy, and recent antibiotic use" also exclude your poop.

At OpenBiome, for instance, potential donors go through a battery of tests, including both your stool and your blood, your medical history and anything else that could affect your stool. "If you traveled to certain regions of the world or recently got a tattoo or recently changed sexual partners, that might exclude you or put you on hold for a few months. We count on people to be honest," Edelstein said. Chronic gastrointestinal disorders also take you off the list, as does any time in jail or ever taking drugs in your life.

If you do get a chance to donate, you'll be asked to come back multiple times a week for at least two months with your poop. OpenBiome pays $40 per donation. Edelstein told the New York Times that some donors "donate multiple times a day — it depends how productive they are," and that one poo can help five different patients with one dose each.

If you're up for the idea and willing to go through the process of testing — and comfortable with either doing your own sample at home or producing it at a test center — fecal donation might be for you. Don't be surprised if you fail the tests, though; not everybody has the right stuff when it comes to poo.