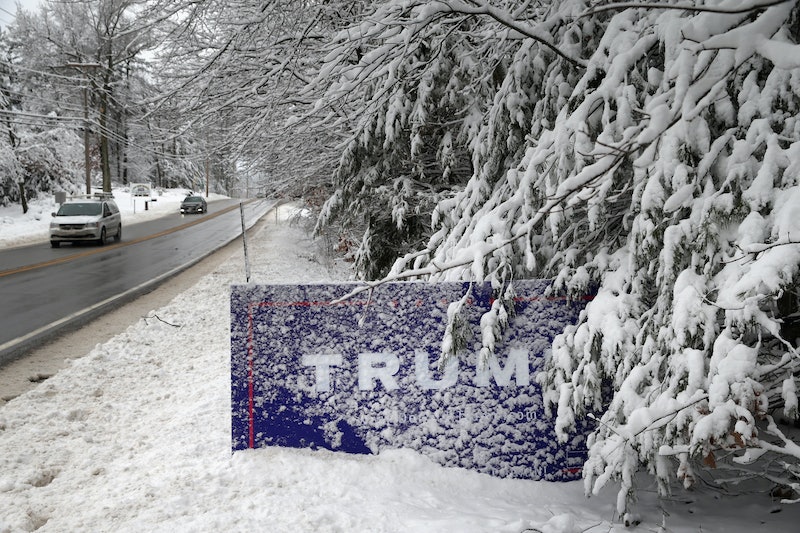 Winter Storm Jayden is bringing frigid temperatures and snow to the Midwest and South, and this prompted President Trump to quip that "we need" global warming (or "Global Waming," as he phrased it in his tweet) to offset the cold. That's not how climate change works, though, and following Trump's tweet, the National Oceanic and Atmospheric Administration took to the platform to explain why cold temperatures in the midwest do not disprove the existence of global warming.

"In the beautiful Midwest, windchill temperatures are reaching minus 60 degrees, the coldest ever recorded," Trump wrote in a tweet Monday night. "In coming days, expected to get even colder. People can’t last outside even for minutes. What the hell is going on with Global Waming [sic]? Please come back fast, we need you!"

This wasn't the first time that Trump, who in the past has falsely claimed that global warming is a hoax invented by the Chinese government, has suggested that cold weather and global warming are mutually exclusive. But they aren't, and Trump was quickly corrected by his own government. On Tuesday morning, the NOAA wrote in a tweet that "winter storms don't prove that global warming isn't happening," and linked to a cartoon and article that explain why this definitely is not the case.

"There are plenty of places where winter temperatures would have to rise by 10, 20, even 30 degrees Fahrenheit before it would stop snowing," the NOAA explains. "Until then, snowstorms remain quite possible, and natural climate patterns and random variability will still lead to winters that are unusually cold and snowy in different locations."

The NOAA goes on to highlight the distinction between the weather, which refers to day-to-day atmospheric conditions in any given location, and the climate, which refers to the broader weather patterns of a place over the course of years or decades. Out of all the snow seasons between 1961 and 2010 that produced extreme cold events, 35 percent of those seasons were actually warmer than average, according to the NOAA.

According to the Third National Climate Estimate, a government report on climate change released in 2014, there's evidence that since 1950, cold season storms in the Northern hemisphere have become more frequent and severe — even though global temperatures have risen over that same period of time.

Trump is thoroughly opposed to government efforts to fight global warming. He's appointed many climate change deniers to his administration, rolled back regulations aimed at reducing global warming, and withdrawn the U.S. from the Paris Climate Accords.

Jayden is set to batter the Midwest and the South over the course of the week, according to Fox News, with over a foot of snow expected in some regions. According to the Weather Channel, three people have died from snow-related injuries in Iowa and Illinois, and states of emergency have been declared in Wisconsin and Alabama. Over 12,000 flights to, from or inside of the U.S. were canceled on Tuesday, according to the flight-tracking website FlightAware.