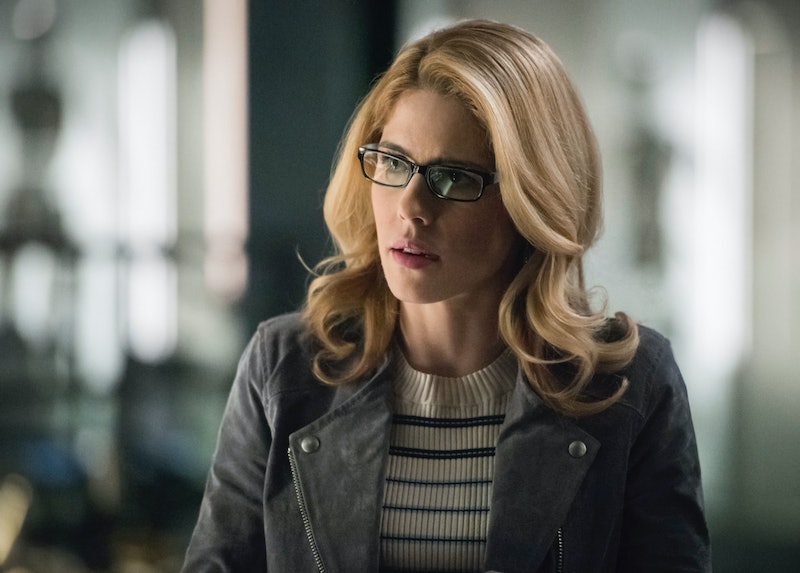 When Arrow's eighth and final season premieres on Tuesday night, one beloved character will notably be missing: Emily Bett Rickards' Felicity Smoak. Rickards announced back in March that Felicity won't be in Arrow Season 8, and the Season 7 finale featured an extended, heartfelt goodbye to the character. However, Arrow creator Marc Guggenheim hinted that Felicity will still be a big part of the Season 8 premiere, just in an unconventional way.

"There's a throwback to Felicity in the season premiere," Guggenheim told Entertainment Tonight. "Emily's not in it, but there's a very conscious, and I think funny, acknowledgement of her."

Season 8 arrives after The Monitor from the last Arrowverse crossover, "Elseworlds," appeared to collect on Oliver's debt for saving Supergirl and the Flash. In the Season 7 finale, Oliver said goodbye to a tearful Felicity and went with The Monitor to save the multiverse, knowing he's very likely going to die. Meanwhile, in a future timeline, an older Felicity bid goodbye to a now grown up Mia, and Felicity herself disappeared with The Monitor to reunite with Oliver. The upcoming "Crisis on Infinite Earths" Arrowverse crossover event in December is likely Oliver's last outing, so the Season 8 premiere will largely be concerned with revisiting Arrow's "greatest hits," assumedly including a key Felicity/Oliver moment.

This will likely be the last we'll see of Felicity. Though there's always a possibility she could appear in the series finale or in the crossover event, Rickards has been frank about being done with the character. "I don't know if anybody is going to like what I'm saying, but I feel like Felicity has done her time," she told Collider. "We knew this was coming for awhile – for over a year – so the whole thing is exactly what we wanted to happen."

And though it's still not quite clear why Rickards left the show (when she announced her departure, she simply posted a whimsical poem on Instagram), it seems to have been a purposeful decision. Executive producers Greg Berlanti and Beth Schwartz confirmed Rickards' exit shortly after she posted it, telling Entertainment Weekly that they were "heartbroken" but "supportive" of the decision, which puts to bed any suggestion that Rickards left due to behind-the-scenes drama.

"We've had the pleasure of working with Emily since Season 1, and in those past seven years she has brought one of TV’s most beloved characters to life," the statement read. "She will always have a family at Arrow.”

The most likely reason for Rickards' departure is that she simply wanted to focus on other projects, though it's hard to underestimate the importance of Felicity to her own upwards career trajectory. The character was Rickards' first-ever TV role, and one that proved to be a breakout casting for her. According to Stephen Amell and Arrow producer Greg Berlanti, Felicity was conceived originally as just a one-episode guest character, but Amell and Rickards had such chemistry that Felicity was soon bumped up to being a recurring character. Rickards "just lit up the screen," Guggenheim explained to Collider. "We had so much fun writing for her that we just kept doing it."

Thanks to Rickards' own charisma, Arrow ended up putting a unique spin on Felicity, who differed quite a bit from her comic book counterpart. Originally introduced as just a quirky computer whiz who Oliver consulted for help, she eventually became an integral member of Team Arrow. Over the years, she and Oliver ended up falling in love, marrying, and having a child named Mia.

Still, while this may be the last fans see of Felicity, it's certainly not the end for Rickards. She's already starred in Funny Story, an LGBTQ drama released in 2018, and an intense play called Reborning, and will next appear in an upcoming dramedy about a video game celeb. Felicity helped Rickards kick off her career. Now, it's time for her to move on to bigger things.