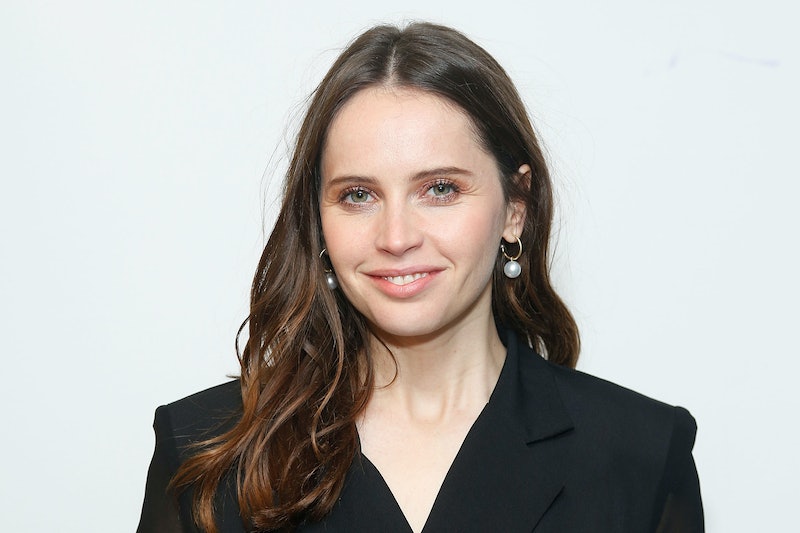 "It's so nice that you say that," Felicity Jones says when I tell her that she made me cry. In On the Basis of Sex, Jones plays Ruth Bader Ginsburg, and moments like the one where she simply says the Supreme Court justice's name in confident way ("Ruth. Bader. Ginsburg.") are — unexpectedly — enough to get the tears brewing.

On the Basis of Sex tells the story of Ginsburg and her husband, Martin Ginsburg (Armie Hammer), from the time when they were both students at Harvard Law until the 1970s, when they argued their only case together, Moritz v Commissioner of Internal Revenue. It was then that Ruth Bader Ginsburg was put on the map as a pioneer for gender equality, as she began her work with the ACLU.

I suspect getting choked up while watching this all go down might be a gut reaction caused by being a woman who's watching a powerful woman achieve things on-screen. (It's a thing.)

"I think a lot of women probably empathize with how complex it is navigating a job in what can be quite a macho industry," Jones explains when we speak over the phone, adding that she can relate to the position a young Ginsburg finds herself in. "Definitely I have had the feelings of being an outsider that Ruth has. Often, in the past, I have been in the minority on set. I have been one of a handful of women in the same way that Ruth was."

On this set, there was more representation than Jones experienced on other projects. On the Basis of Sex is directed by Mimi Leder (Deep Impact, The Leftovers), and the actor believes that having a woman in that position made a difference.

"I think it was important to have someone who empathized with the story on a personal level," Jones says. "And I know Mimi definitely has gone through a lot of what Ruth has went through. But, more than that, it was about having someone who's brilliant, and she is an exquisite director."

It helped that she actually got to talk with Ginsburg in person. "What was lovely when we first went in to meet her — and we were all really nervous, we'd gone to Washington to see her — and then she couldn't take her eyes off Armie Hammer [who plays her husband, Martin] when we walked in," Jones says. "It was lovely just to see those non-verbal moments where I could start to piece together and really understand who Ruth was on a very human, instinctive level."

What struck Jones most once she did get into the role was playing "someone who's so principled." Jones explains, "Particularly, I think, in times that it feels like there's a lot of people who aren't principled who are in power." She continues, "That's why Ruth's had this enormous swell of popularity in the last few years, because she actually has been motivated by acting for the good of her country, for the good of equality, and not for money and fame."

While, at times, On the Basis of Sex, which was written by Ginsburg's nephew, Daniel Stiepleman, can feel a little heavy-handed about how Ginsburg's fight in the '70s relates to the world we live in today, overall, it's affecting. It helps if you aren't overly familiar with Ginsburg's early career, but also the connection is there: The fight for women's rights is ongoing, and Ginsburg is still a part of it.

Jones believes the film is important today because it encourages people to stand up for what they believe in and know that they can be heard. "Ruth came from not a particularly privileged background, and look at the effect that she's been able to have on the world," she says.

She also notes that the film has the ability to change "perception about how men and women are supposed to behave." In the movie, Martin is the one who cooks dinner for the family, and it still stands out today, even though the film takes places over 40 years ago.

"I feel like there's still this old-fashioned attitude, this to-do about men looking after children and that needs to completely be eradicated," Jones says. "That's what will also help women to get into higher positions of power when society doesn't expect men and women to have certain roles."

Jones hopes that, when audiences leave the theater, they "have a bounce in their step. I hope they feel a sense of hope from this." After all, that's the effect Ginsburg has had on her.

"Whenever I go, 'Oh, I'm not going to be able to do that' or 'I'm not going to be good enough at that' or 'Why am I doing this?' I think of Ruth, and I think just how much she persisted and how much she fought and how she did it on her own terms and how important it is to have a voice and to stand up for your beliefs," Jones says. "It's a great privilege to be able to do that and not to shy away from it. So, she's with me all the time. I think of her often." And, soon, even more people will get to feel the same way.

On the Basis of Sex hits theaters nationwide Jan. 11 and is in select theaters now.