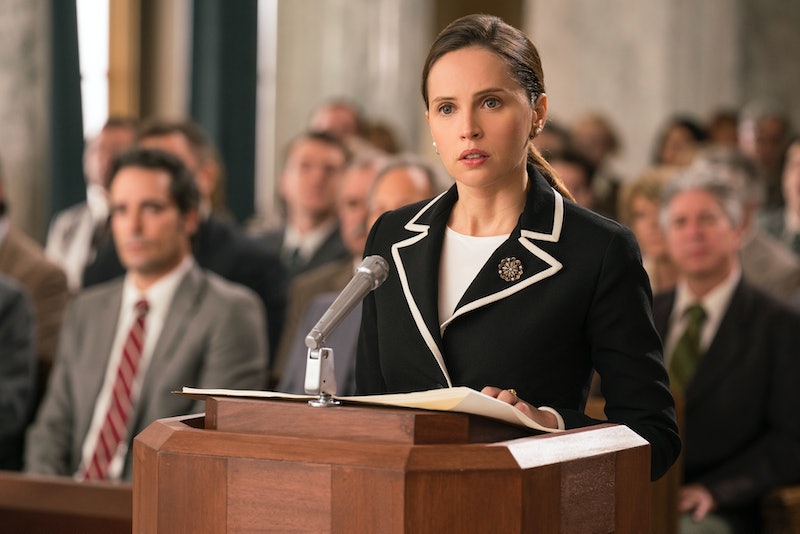 There's an early scene in On the Basis of Sex which finds a young Ruth Bader Ginsburg, played by Felicity Jones, freshly graduated from law school and trying to find a job. Despite graduating at the top of her class, the woman who would become a Supreme Court Justice has trouble landing work, either because the law firms at which she applies already have a female lawyer and don't "need" any more, or they don't want to hire any at all. The closed doors, glass ceilings, and ignored phone calls that she encounters feel so real, so painfully understandable, because Mimi Leder the director of On the Basis of Sex, has infused them with her own experiences. It was that understanding, and how much she identified with Ginsburg as a fellow woman who's also had to overcome high hurdles, that inspired Leder to direct the film to begin with.

"I just had to tell this origin story of this woman," Leder says when we speak over the phone in December. On the Basis of Sex, in limited theaters now and opening wide on Jan. 11, tracks Ruth Bader Ginsburg's journey from Harvard Law School to teaching during the height of the '70s feminist movement to arguing her first groundbreaking sex discrimination case. Though RBG's story is incredibly inspiring, Leder insists that Ginsburg is "not a superhero, but a woman. A woman who, despite the pats on her back and the culture of discrimination, she’s a woman who changed the culture with her smarts and her elegance and made the country freer and better place for all of us. I felt very honored to be directing her story."

Leder was so drawn to the script, written by Ginsburg's nephew Daniel Stiepleman, because of the similarities she saw between their lives. "Not that I'm comparing what I’ve done with her," Leder says, but "the Justice and I have, in different generations, a lot of commonalities in the worlds we have lived in. We're both Jewish women, and mothers. We both have had long standing marriages, we've broken the glass ceiling in our own ways for generations to come, we both know what it means to make change. I just understood a lot about what made her who she is."

Breaking glass ceilings and fighting her way through the door is something that made Leder who she is as well, having been one of a huge handful of female directors put in "movie jail," the term used to describe film directors put in a state of jobless limbo after a poorly performing project. For Leder, who also directed 1998's Deep Impact, that project was 2000's Helen Hunt and Kevin Spacey weepie Pay it Forward, which didn't perform well either critically or financially. "I couldn’t get a good script," Leder says of the projects she was being offered in the interim of 18 years since then. "I was just receiving scripts that weren’t very good so I didn’t want to [do] them."

So Leder turned to television. In addition to serving as a director and co-showrunner for HBO's The Leftovers, she's directed nine pilots over the years, six of which went to series, in addition to directing episodes of Shameless, Smash, Nashville, and The West Wing, among others. Leder doesn't consider the almost two decades she spent in television lost time; becoming a prominent TV director and showrunner during the so-called Golden Age of Television has its benefits and its rewards. "Storytelling is storytelling whether you're doing it on the small screen or big screen. Now have the good fortune to choose where I work and which stories I get to tell and premium TV and the work we are doing in television is very inspiring," she explains.

Having said that, Leder adds, "On the Basis of Sex is one the most life-changing experiences I’ve ever had." Like many modern women today, Leder finds Ruth Bader Ginsburg's life inspiring, and her determination as something to aspire to, particularly when the world seems intent on beating us down.

"It was hard coming back from movie jail, but I came back!" Leder says, laughing. "You know, being a woman in our industry you have a lot of doors closed in your face and you just have to keep on moving forward, standing up, and doing the work."

Something tells me that RBG would definitely agree with that.