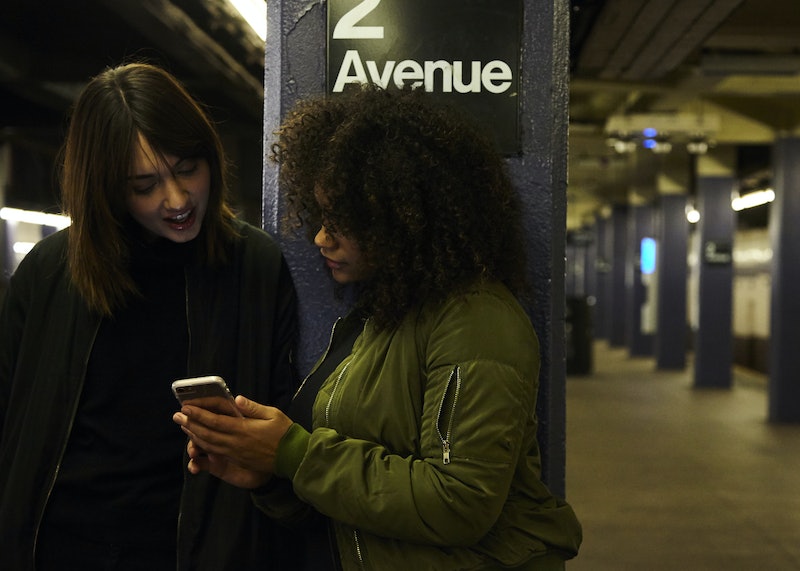 You've probably played hours upon hours of the unbelievably popular Words With Friends, and may think you know the game inside and out. But behind the app is a major cultural shift in how we're thinking about games and gaming — and specifically, how the industry is changing for women, in a post-Gamergate world. Bustle spoke to Lead Experience Designer for Zynga, the company behind Words With Friends, Michelle David, and Lead Game Designer Kate Stavola, to see exactly how this shift is occurring — and what women who want to get into the tech side of gaming need to know.

"I've been gaming my whole life," Stavola tells Bustle. She's worked in the games industry for 17 years now, after a series of diversions took her away from her original aim to be a physicist, from a last-minute college shift into a bachelor's in English to a "moonshot" job as an intern at the company that produces Magic: The Gathering. "My parents thought I'd go to law school eventually," she says, but after 17 years, "I've made a career without realizing it."

David also grew a career out of her lifelong love of gaming, one that's shared by her family. "I basically grew up with video game consoles everywhere," she tells Bustle. "I never thought I would be in the video games field per se, but it's always been a huge passion of mine." After going to college for visual development and animation, she moved into educational mobile games, then started at Zynga as an entry-level experience designer and is now, three and a half years later, at the head of her own team.

If you're wondering what they do day-to-day, experience and game design don't involve as much fiddling with code as you might think — or, indeed any at all. David explains, "Experience design is kind of a new career path — it's kind of why I stumbled upon it. We create the user flows for products and make everything feel intuitive so that when a player comes into your app, it feels very seamless. The other part of it is designing the visuals for it." Colors, menus, how your achievements track: that's David's business. Stavola, meanwhile, says, "People think that what I do is what game engineers actually do. I don't code the game, but I tell the engineers how the game will actually work: the game rules, the structures that people interact with while they're playing."

Video games have always had a home for female designers and thinkers, from Carol Shaw, the first ever female game designer (she was behind Atari's 3D Tic-Tac-Toe in 1978), to Roberta Williams, who invented the idea of the graphic adventure game in 1979 and co-founded Sierra Games. But the gender split remains problematic. While women make up 42 percent of gamers when it comes to computer and video consoles, they only made up 22 percent of the worldwide gaming industry, according to a survey from 2015. And those who are in the industry face pay discrepancies even at the top of the industry, according to another 2015 study by the International Games Developer Association. It found that even though women and men have about the same percentage of managerial jobs at gaming companies, 10 percent of the men reported earning over $150,000 yearly, compared to only 3 percent of women.

But Stavola and David point to a lack of representation of women who have advanced in their careers as a major issue impeding progress. "I didn't have women role models or female mentors who did design, so I didn't consider it as a career path for me," Stavola says. She didn't consider it seriously until she moved into mobile gaming, where women game designers have a wider variety of roles. "That made it easier to make the jump," she says.

"It's harder to imagine yourself in a career if you don't see other women doing the same thing," David says. Her own experience has also been shaped by the availability of visible female leaders. "Getting into the mobile industry, I did see a lot of women doing all sorts of roles," she says, "I realized that there was no reason that I couldn't be a leader as well and have a seat at the table." And they've both built that into their careers as they move up. "It's been super important throughout my career to look upward and see women I could model my career on," Stavola says. "I realized six months ago that 'oh my god, that's me now for a lot of people!'" Now, she and David both do extensive mentoring of the women junior to them at Zynga. "In addition to teaching them how to do the technical part of the job," says Stavola, "I'm teaching them leadership, helping them find their voice, getting them to feel more confident taking charge and having ownership of what they work on. I think being there and being visible and helping other women is super important."

They also believe that mobile games are a new frontier for better opportunities when it comes to women in gaming. According to a 2017 survey, the majority of players of mobile games are female and they play more often than men — and that's changing how we play. "It's interesting that women are playing more mobile games, and now there are more women at the table, we're seeing a lot more diversity in the types of games, the ways to play, the features that we offer," says David. And a lot of that, says Stavola, has to do with who's got the time to play what. "Mobile gaming as a platform has done a lot to diversify the audience. Not everybody has an X-box, but everybody has a cellphone. A lot of the games that are made for phones have time spans that fit more into a woman's typical day, as opposed to a teenage boy who has four hours to kill in the evening playing a console game. Those games require a heavy time investment; the sessions are long. I used to be a console gamer, but with having a career and a life as an adult, that becomes more difficult. And I think that's true for a lot of women."

The result? More women are being invited to shape the gaming experience. "Women don't obviously make games for women and men obviously don't make games for men," says Stavola. "But now that women are being taken more seriously as a player base for games, it makes sense to give women leadership positions in those companies, and give them roles in designing the games, just to have a different set of perspectives when you make the product."

And the results arerewarding. "It's been really exciting having people around me who've supported me and seen the little spark in me and encouraged me on the way, both female and male," says David. But the plusses aren't just confined to the office. "Working on Words With Friends is probably the most rewarding thing about being on this team," Stavola tells Bustle. "We know many people who use the game to stay in touch with people. My future father-in-law and his sister play more Words With Friends than actually talking to each other, and I hear that a lot! That's super rewarding." David adds, "My dad lives in Guam, and it's a bit like playing phone tag. But the constant way we keep in touch is with Words With Friends — and sometimes I let him win. I think being on a game that is so important to people and helps them keep in touch with loved ones is a huge bonus for us." In one of the major feel-good stories of the year, young rapper Spencer Sleyon travelled 1,000 miles to meet Rosalind Guttman, an 81-year-old Florida woman he'd befriended over months of Words With Friends gaming.

When asked what advice they'd give to young women who want to get into gaming or further their careers in it, they're both all about one thing: don't be intimidated. "I think if you have a passion for games, then there's a job for you in games," says Stavola. "You can do it if you want to. Any number of other job roles can be open to you: you don't have to know how to write code or be a proper engineer. You can be a woman in any role on any team on any game." "It might be intimidating," adds David, "but I think the best way in is to reach out to people who you know are in the industry, have a chat with them, get to know their story. There are definitely folks out there who want to help the next generation get into gaming!" And, they suggest, if you're looking to get into the industry, women's groups who support women in gaming and tech are often a great resource.

And if you're in game design yourself, says David, work on being a mentor to other young women. "It sounds daunting, but it really isn't; it means going out there and genuinely sharing your journey," she says. "People can really relate to that, and think "if you can do it, I feel empowered to achieve it."