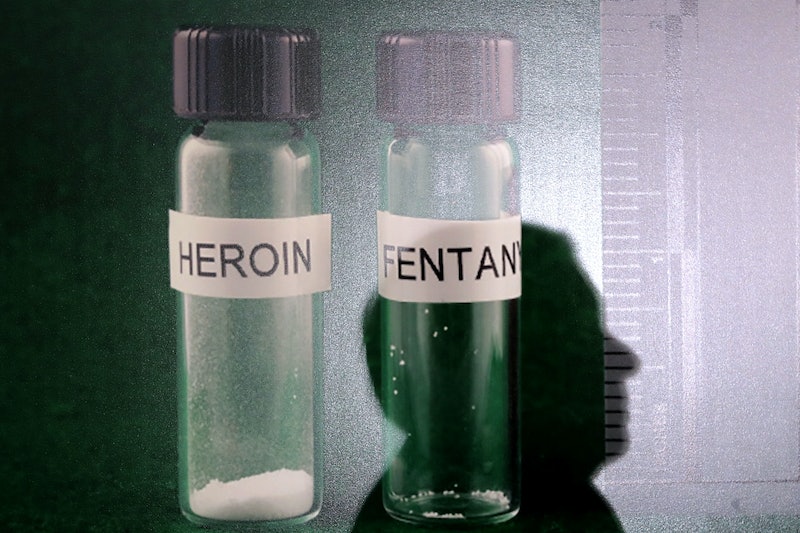 As the opioid crisis wears on, the government is considering declaring fentanyl a weapon of mass destruction, reports the military news outlet Task & Purpose. In a February memo obtained by the outlet, Department of Homeland Security assistant secretary for countering weapons of mass destruction James F. McDonnell made a case for potentially treating the substance as a chemical weapon.

"Fentanyl's high toxicity and increasing availability are attractive to threat actors seeking nonconventional materials for a chemical weapons attack," McDonell wrote in the memo, which was prepared for then-Secretary of Homeland Security Kirstjen Nielsen, according to Task & Purpose.

McDonell quoted a FBI Weapons of Mass Destruction Directorate, which assessed that "...fentanyl is very likely a viable option for a chemical weapon attack by extremists or criminals."

The government hasn't yet classified fentanyl as a WMD, but some experts believe that the substance's threat could be greater than initially believed. Former assistant secretary of defense for Nuclear, Chemical, and Biological Defense Programs Andy Weber told CNN that utilizing fentanyl as a weapon could be "disturbingly easy."

"Now that there's actually a market where one can buy large quantities of fentanyl analogues, it eliminates the capability gap and it makes it accessible to terrorist groups," Weber told CNN. "It's a game changer. In my lifetime I've never seen a weapon of mass destruction that is part of an existing black market."

The National Institute on Drug Abuse reports that in 2017, fentanyl accounted for more than 28,400 of the estimated 70,200 drug overdoses that occurred that year.

"Within the past couple years, there has been a reinvigorated interest in addressing fentanyl and its analogues as WMD materials due to the ongoing opioid crisis," McDonnell wrote in the memo.

However, not all experts are on board with the idea of treating fentanyl like a WMD, reports Task & Purpose. Chemical, biological, radiological, and nuclear defense expert Dan Kaszeta expressed skepticism about the memo's intent.

"It reads like somebody is laying the administrative background for trying to tap into pots of money for detecting WMD and decontaminating WMD," Kaszeta told Task & Purpose. "It's an interdepartmental play for money, that's all it is."

The National Institute on Drug Abuse describes fentanyl as an opioid "that is similar to morphine but is 50 to 100 times more potent." While it has legitimate uses as a pain killer in small doses, the institute reports that fentanyl is most commonly associated with overdose deaths.

Fifty-nine percent of opioid-related deaths in 2017 involved fentanyl, the institute reports. That number was 14.3 percent in 2010, per the institute. Frequently, fentanyl deaths occur when the drug is used to lace other substances, particularly when users are unaware that the additional drug is present.

It wasn't immediately clear what, if any, steps were taken after the memo was written in February. Nielsen is officially out as DHS secretary, as of mid-April. While there is an acting secretary currently filling the position, it's unknown when a long-term successor will be selected.