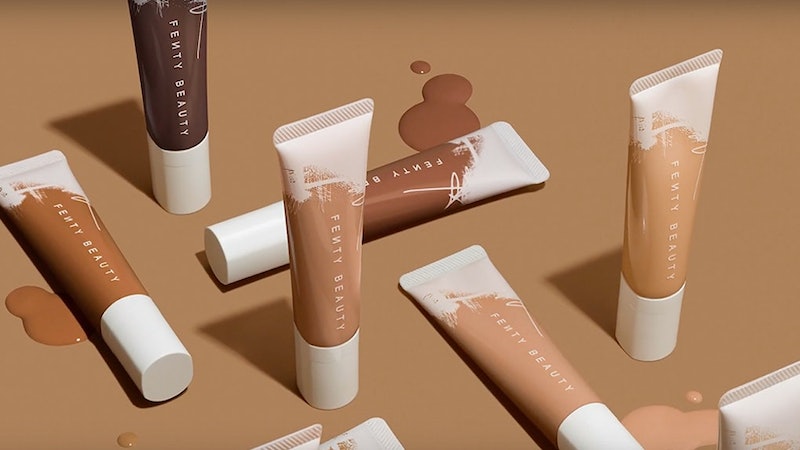 For all those who want their skin to look like skin, Rihanna has been working on something for you. One of the most-requested products by fans, the Pro Filt'r Hydrating Foundation is another longwear formula that comes in 50 shades. The product description reads that this makeup is a "first-of-its-kind" hydrating foundation, and that it has comfortable medium to full coverage. It gives skin a natural finish that is perfect for normal to dry skin.

But this isn't going to be a dewy foundation — there will be no enhanced glistening and glowing here. "We’re talking natural — not dewy — like your skin just had a must-needed drink of water," the product description reads.

The formula includes grape seed oil and sodium hyaluronate to nourish your skin and give dry complexions a boost. "Grapeseed oil can do wonders for the skin, and you can thank its richness in vitamin E and omega chain fatty acids for that. It is known to have antioxidant, anti-inflammatory, antimicrobial properties, which is why it has become a popular ingredient in skincare products," Dr. Gretchen Frieling, a board-certified Boston Area Dermatopathologist, tells Bustle. "The vitamin E found in grapeseed oil protects the skin from free radicals (harmful UV rays), which we know causes skin damage, premature aging, and fine lines. Grapeseed oil's powerful antioxidant ingredient called proanthocyanidin also evens out the skin tone and reduces hyperpigmentation."

Sodium hyaluronate might sound like a technical term, but it's another word for hyaluronic acid, which is the ultimate hydrating ingredient. "It is a safe, non-irritating component found naturally in the dermis of your skin. It revitalizes the skin by retaining moisture and reduces flaking, resulting in smoother and more youthful-looking skin," Dr. Frieling says.

According to Dr. Frieling, sodium hyaluronate attracts and preserves moisture in the air or underneath the skin. And when it is applied regularly, it rejuvenates the skin with moisture, making the skin more firm and plump. "It significantly reduces the appearance of fine lines and wrinkles and doesn't leave your skin oily like other moisturizers typically do. This is why sodium hyaluronate can be found in many moisturizers and serums," Dr. Frieling says.

The bottle has also been revolutionized. The Pro Filt'r Hydrating Foundation won't come in a cylinder bottle like its matte counterpart. Instead the foundation will be offered in a portable tube, letting you pop it into your purse and take it on the go without any fears of spills or messes. It is still the same size as the original, clocking in at 32 mL.

But just like the original Pro Filt’r, the Hydrating Longwear Foundation has a sweat and humidity resistant formula that swipes on without settling into pores or fine lines.

The foundation is dropping on Aug. 15 and will be available at FentyBeauty.com, Sephora, Harvey Nichols, Boots, and Sephora in JCPenny.

The similarities include they are both longwear, are sweat and humidity resistant, and have medium to full coverage. They also have the same 50 shades, so you should be the same shade in both formulas.

As for differences, the original foundation has mattifying properties that absorb oil. It has an oil-free formula for a shine-free finish. The new foundation is great for normal to dry complexions, but anyone can use it. It has hydrating properties that gives skin a natural finish. Ono suggests using Fenty Beauty's Kabuki-Buff Foundation Brush 115 to buff in the hydrating formula for a seamless application. It will give you that blurred look.

Ono also revealed that Rihanna has an oilier complexion, so Ono usually uses the soft matte foundation on the artist. But in the last eight months, Ono has been using the Pro Filt'r Hydrating Foundation on Rihanna to give the mogul that no makeup-makeup look.

Fenty Beauty's new Pro Filt'r Hydrating Foundation is the perfect formula to both blur and nourish your skin, all while giving you a natural finish. It's a staple in every beauty arsenal.