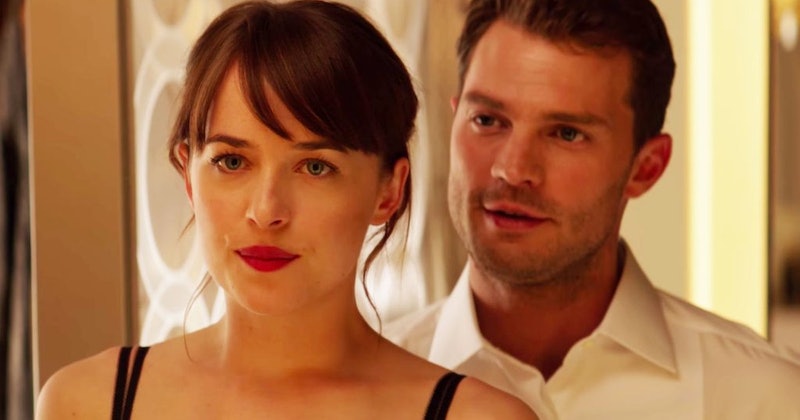 Let's get one thing straight: I did not go into Fifty Shades Darker expecting an Oscar-winner. Having seen the first film, and having read snippets of E. L. James', shall we say, unique writing style, I knew that this movie likely wasn't going to be the best thing I'd ever seen, especially when it came to its feminism. Sure, Fifty Shades is a series technically about a woman's deepest fantasies, but Christian Grey's controlling behaviors and Ana Steele's weak-willed personality don't make most feminists jump for joy. Yet while I didn't realistically expect that the franchise's new movie would be a total win for women, it was still disappointing to learn that, when it comes to its feminism, Fifty Shades Darker is frustratingly unsatisfying.

I know, I know — most people aren't seeing this movie in order to have their perspectives widened about the portrayal of women on-screen. The Fifty Shades series has never pretended to be groundbreaking or particularly progressive, and although the Grey movie had its moments of feminism, including the addition of a female director behind the lens, it still fed far too strongly into the "Christian's a controlling creep, but it's super hot" narrative promoted by the books. Still, it was enjoyable enough due to its Abercrombie model-like cast, catchy soundtrack, and hilariously bad dialogue to make even the most skeptical female viewers put aside the criticism for a few hours of pure entertainment. And for most audiences going into Darker, the expectation is likely the same.

But watching Fifty Shades Darker, I couldn't just accept this movie as the same kind of silly, flawed piece of entertainment as the first film. Unlike the first movie, which was entirely void of any real feminism, in my eyes, this one actually has several moments in the film that are surprisingly pro-women, scenes that put Ana's desires first and give her control. (Some spoilers ahead.) Take, for instance, the film's first sex scene; after Ana and Christian start passionately making out, he moves down her body, and she tells him to go down on her — which he does, happily (well, as happily as Christian ever does anything). In a series based around the idea of women being submissive to men, it's refreshing to see a scene in which Ana vocally states her desire for Christian to pleasure her, and one in which he complies without hesitation. Later, he goes down on her again, to her obvious delight.

In another, much different scene, Ana is trapped in an office with her predatory boss, who's threatening to rape her and physically constraining her. Considering this is a Fifty Shades movie, I know I'm not the only one who expected Christian to come running in and save Ana — but instead, I was happily surprised to see Ana fight her way out, kick her boss in the groin, and run out the door. Sure, she immediately runs into Christian's arms, but to see her kicking ass and saving herself from harm without a man's help is still pretty damn cool.

Unfortunately, though, these are Fifty Shades Darker's only real feminist moments. The rest of the movie is as you'd expect, if you're familiar with the series; Christian controls Ana's every move, even as she protests and makes it known she's uncomfortable, until Ana eventually gives in and forgives him without a grudge. Yes, they have a relationship in which Christian is expected to be more controlling than the average boyfriend, but in Darker, as in Grey, it's taken to levels where Ana should, realistically, think of Christian as her stalker, not her lover. He gets angry around her male friends, and takes her out of situations where she might seem to be having fun; he gets into her bank account, and won't explain how he does it; and, most disturbingly of all, he flat-out forbids her from going on an important work trip due to then-unfounded jealousy.

It's creepy and discomforting, but the movie, like the books, doesn't seem to view it as so. Instead, Ana gets to protest for a few minutes, making her displeasure known, before agreeing to Christian's every demand and jumping into his waiting arms. It doesn't matter that, after he forbids the New York trip, she angrily informs him that he has no right to tell her what to do, because a short conversation later, all is forgiven, she's cancelled the trip, and her brief burst of independence is forgotten completely. In the short term, Fifty Shades Darker seems to understand that Christian's behavior is out of line, but in the long run, the film appears to exist in an alternate reality in which women not only have no control over their own lives, but enjoy it.

Again, this isn't surprising. But it is disappointing, since Darker does have those few, precious moments where Ana shows some spirit and acts upon her own desires. Those scenes reveal the potential this movie had to be something female viewers could both enjoy and respect, not view as a "guilty pleasure" that's fun to watch but entirely problematic. But alas, in the end, Darker proves to be just as eyeroll-worthy as its predecessor, a film whose sparks of feminism are overshadowed by its bigger, more frustrating themes.