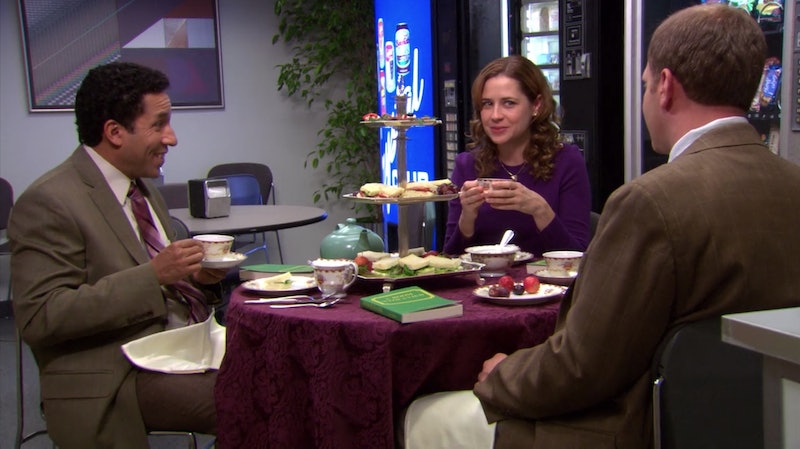 This is going to make The Office fans so happy. Jenna Fischer designed a Finer Things Club logo for charity, which you can have printed on specific items for really reasonable prices. On Sunday, Fischer teased on her Instagram Story that she created something special for charity, but kept the details to herself. On Monday, the actor, who brought Pam Beesly to life on the still favorite NBC comedy, revealed she partnered with Represent.com and has released a Jenna Fischer's "Finer Things Club" Collection.

It's a limited edition collection available for only two weeks. You can have the logo printed on sweatshirts, hoodies, T-shirts, coffee mugs, and totes. As previously mentioned, all of the proceeds go directly to charity. The sales will go to Miry's List, a non-profit organization providing refugee families seeking safe haven in the United States with anything they may need to survive, like diapers, toiletries, groceries, or meals.

What makes this all the more amazing is that Fischer designed the logo herself, which she announced on her Instagram Story Monday. It's unclear if the Splitting Up Together star provided input on what she wanted the logo to look like or if she actually created it herself from start to finish, but, either way, the design turned out great. Pam would be so proud, especially as an artist herself.

As you can see below, the logo features Pam wearing her famous pink sweater. Pam is also holding a tray with a cup of coffee, a piece of cake, and, of course, the sea foam green tea pot Jim gave her as her Secret Santa in the Season 2 episode "Christmas Party".

Also, how adorable does Fischer look holding a coffee mug and a mini-sea foam green teapot, while wearing a T-shirt with her logo? She's totally channeling Pam all over again — and she hasn't lost her touch as the beloved character.

For those who don't remember (if not, why are you the way that you are?), the Finer Things Club showed up in "Branch Wars" (Season 4, Episode 6). Pam, Oscar, and Toby founded the prestigious club. They were extremely selective in choosing members, which is why they were the only ones

The purpose of the club was to transport members to "another age" and to a "time of refinement and civility," per Pam. The club met once a month to discuss art, books, and to celebrate culture "in a very civilized way". As Pam was sure to note to the cameras, "There is no paper, no plastic, and no work talk allowed. It's very exclusive."

Even Jim wasn't allowed to join, because, according to Pam, "Some people think that you monopolize the conversation by trying to be funny." She was referring to Oscar. At the end of the episode, Pam invited Jim, but it didn't go well. Andy also tried really hard to become a member. "The Finer Things Club is the most exclusive club in this office," he told the cameras. "Naturally, it's where I need to be."

During a club meeting, Andy attempted to weasel his way in, but Pam reminded him it was "a closed club." He wasn't happy, but at least he didn't punch a hole in a wall.

One might think Michael would've wanted to join, since he never wanted to be left out. But, in this particular episode he was too busy trying to stop Stanley from being poached by Dunder Mifflin's Utica branch (run by Karen). Plus, seeing as Toby was a member, well, Michael probably wanted to stay as far away from him as possible. Here's how he reacted upon seeing Toby wearing a bow tie for a Finer Things Club meeting:

If you always wanted to be part of the Finer Things Club, now you can in a way thanks to Fischer. Plus, you'll also be giving back to a good cause.