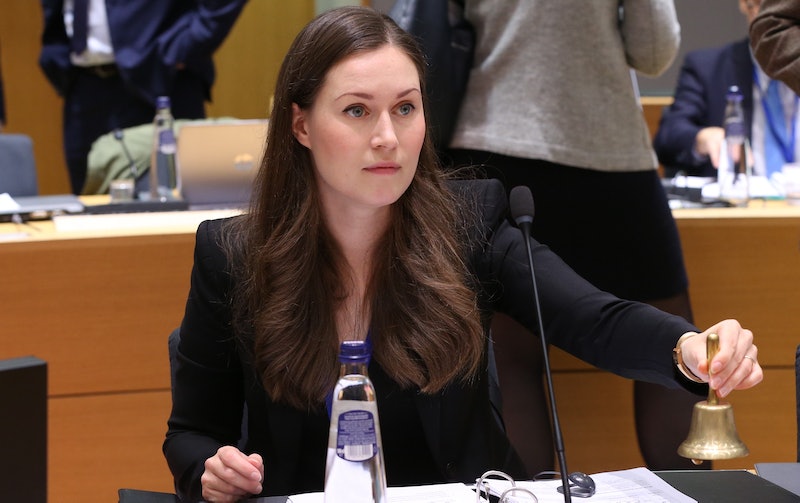 To become Prime Minister is a massive achievement. Even if you pursue a career in politics it’s unlikely you’ll get the top job. It’s something people work for years and years to achieve. So, to become Prime Minister in your early thirties is basically unheard of. However, Finland’s Sanna Marin will become the world's youngest sitting Prime Minister at the age of 34 this week. The Finnish minister will be sworn in as the current leader of the Social Democratic Party and Prime Minister, Antti Rinne quits. Considering her age, she’s had a long and successful career in politics and has never considered her age or gender as being relevant to winning over the support of the country.

Marin is a member of the Social Democratic Party and will lead the coalition that governs Finland. Finnish politics looks a little different to what you may be used to as every leader of the five coalition parties are female and four are in their thirties. A policy agenda was set with the other parties at the last election in Finland in April 2019 and the BBC said it’s unlikely that Marin will make any major policy changes. The former transport minister won a small majority to become Prime Minister and the BBC said she said, “we have a lot of work to do to rebuild trust.” When it comes to the driving forces behind her career the Guardian said she said she, “never thought about my age or gender. I think of the reasons I got into politics, and those things for which we have won the trust of the electorate.”

Marin is the third youngest current world leader as New Zealand’s Jacinda Ardern is 39, and the Ukrainian Oleksiy Honcharuk is 35 and while she may not consider her age or gender her career has been pretty amazing. The Guardian said that Marin was raised by her mother who later entered a same-sex relationship. She was the first to go to university in her family and became successful in her political career after leading the city council of her industrial hometown Tampere when she was 27.

She became transport and communications minister in June 2019 and stood in as leader of the Social Democratic Party earlier in 2019 after Rinne fell ill. Rinne stepped down last week after his coalition partners said they’d lost confidence in him.

It seems ridiculous that in 2019 we’re still talking about gender equality and representation in politics. While Marin will be Finland’s third female leader, the BBC reported that discussions about gender equality in Finnish politics have been ongoing for the last decade. Despite this Finland remains a gender equality pioneer. According to the Global Gender Gap in 2017 Finland ranked the third most gender-equal country in the world and is the second best country in the world to be a girl according to the 2016 Girl’s Opportunity Index.

Reaching the top of her political career before the age of 35 is nothing short of outstanding and having a young female leader sends out a really strong message and image to aspiring female politicians. While Marin has brushed away questions about her age and gender, others have highlighted that she’s at the forefront of a new generation of politics in Finland.

More like this
This Is When Netflix Is Going To Start Charging You For Sharing Passwords
By Darshita Goyal
Eurovision Has Been Given A Whole New Look Ahead Of Its Liverpool Debut
By Bustle UK
Pret & Costa’s Coffee Is The Strongest On The High Street, According To Which?
By Sam Ramsden
Twitter Has *A Lot* To Say About The "Single Penalty”
By Sam Ramsden
Get The Very Best Of Bustle/UK
Sign up for Bustle UK's twice-weekly newsletter, featuring the latest must-watch TV, moving personal stories, and expert advice on the hottest viral buys.