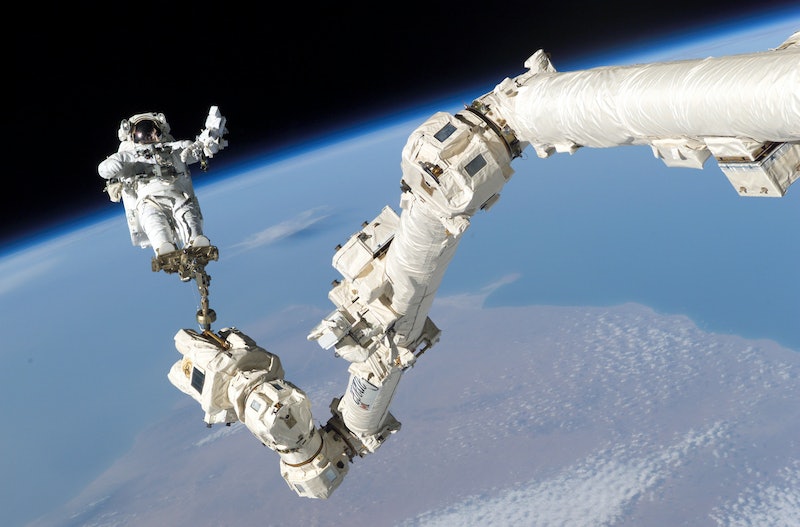 In 1984, Russian cosmonaut Svetlana Savitskaya became the first woman to complete a spacewalk. Almost 35 years later, despite myriad women having walked in space, there has yet to be an all-women spacewalk. That glass ceiling is about to be shattered as American astronauts Jessica Meir and Christina Koch prepare for the first female-only spacewalk scheduled for Oct. 21, 2019, NASA reported on its International Space Station Twitter page.

The walk was originally slated for March 2019, but NASA released a statement saying the spacewalk was canceled because two properly fitting spacesuits were not available at the space station. Now, with new spacesuits, Meir and Koch will make history during the first all-women journey outside of the International Space Station.

In a clip from NASA TV, Koch said that while it can sometimes be frustrating to have one's accomplishments measured by gender, she thinks this spacewalk is an important milestone for women to celebrate.

"I think it's important because of the historical nature of what we're doing, and that in the past women haven't always been at the table," she told NASA TV. "It's wonderful to contribute to the human space flight program at a time when all contributions are being accepted. When everyone has a role. And that can lead, in turn, to an increased chance for success. I think it's an important part of the story to tell."

Meir agreed. "What we're doing now shows all of the work that went in decades prior. All of the work to get us where we are today," she told NASA TV. "It's really nice to see how far we've come."

According to a news release from NASA, spacewalking is one of the most dangerous tasks astronauts perform. On spacewalks, astronauts work to repair external features of the International Space Station, which means they'll be outside of the ISS for over six hours at a time. This is why properly fitting spacesuits are vital for both safety and success.

"The spacesuit worn during these excursions is the Extravehicular Mobility Unit, or EMU. This suit is essentially a personal spaceship that keeps astronauts safe and ensures they are able to perform complex, difficult work in the vacuum of space and the microgravity environment of low-Earth orbit," NASA explained.

"The spacesuit provides life support including breathing air and thermal controls, critical in space where temperatures range between plus or minus 250 degrees Fahrenheit, battery power, communication systems, and protection from radiation, and tiny space debris — all of which are necessary for spacewalker safety and productivity."

According to NASA, astronauts generally spend between five to eight hours outside of the space station during a spacewalk. They put their spacesuits on several hours prior to the walk and the suits are filled with oxygen.

"Once in their suits, astronauts breathe pure oxygen for a few hours. Breathing only oxygen gets rid of all the nitrogen in an astronaut's body. If they didn't get rid of the nitrogen, the astronauts might get gas bubbles in their body when they walked in space. These gas bubbles can cause astronauts to feel pain in their shoulders, elbows, wrists, and knees," NASA said on its website.

Interested in donning such a suit and walking in space? Koch told Bustle earlier this year what it's like to sleep, eat, and more at the International Space Station. If you want to become an astronaut like Koch, you'll need a bachelor's degree in engineering, biological science, physical science, computer science, or mathematics, according to NASA. After you graduate, you'll need to obtain three years of professional experience related to your degree, or have a minimum of 1,000 hours pilot-in-command time on jet aircraft. Finally, you'll have to pass NASA's physical exam.

NASA also noted that future space missions include a potential trip to Mars. If you start prepping today, the first human on Mars could be you. In the meantime, watch Meir and Koch spacewalk live on NASA TV Oct. 21.