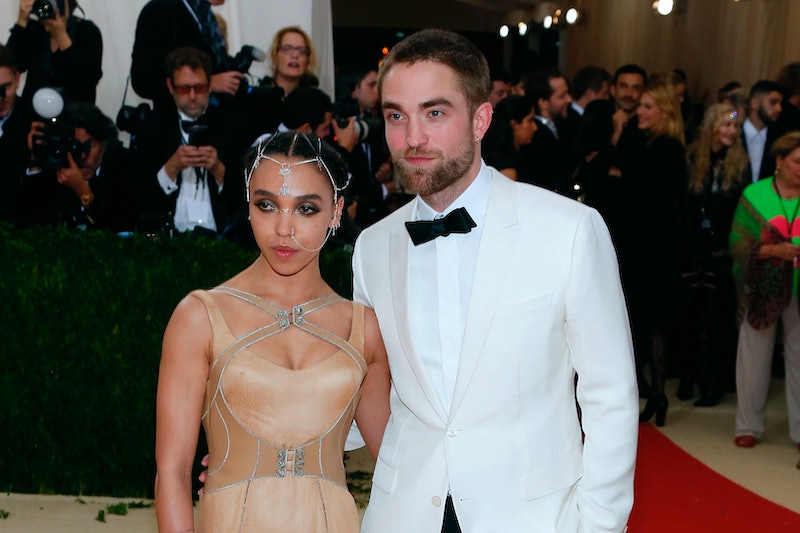 Two years after the end of her most high-profile relationship, FKA Twigs feels more like herself than ever before. During a recent interview with Apple Music's Beats 1 DJ Zane Lowe about her new album, Magdalene, FKA Twigs opened up about her split from Robert Pattinson, revealing that she feels like she "knows myself better" now that she's single than she ever did in a relationship. The singer — also known as Tahliah Debrett Barnett — revealed that her most recent album was inspired the "experiences and hardships" she's endured recently, including her 2017 breakup with Pattinson.

"It was scary because I think I'd never written from, well I've always written from a really honest place, but an honest place at 22 or 23 with your life experience is different to an honest place," the 31-year-old Twigs said. "Then, years on when you've experienced responsibility and heartbreak and a kind of glimpse of real adulthood ... It became not easier in process, but just kind of like easier in the acceptance of myself to be able to put that on the table."

One of the "honest" things that Twigs tackled in her songwriting was the process of "unmeshing" herself from a long-term relationship with the Batman actor. The pair were first spotted together in September 2014, according to People, and confirmed to be engaged in April 2015. They called it quits in 2017. "When you're with somebody, your lives become very entwined with like your friends and family and your routine," the singer explained. "And then the unmeshing is like, you have to really find out — I had to really find out who I was."

In addition to learning how to be single, Twigs revealed that Magdalene also explores prioritizing herself and what she wants in a relationship. "As a woman, I was taught that your Prince Charming would choose you, and when he did, you were grateful," she said. "And it was more about you being chosen than asking 'what's right for me?', and 'what do I need to be nurtured or to feel complete?' Magdalene is unraveling that and finding my voice without society’s whispers."

Though Twigs is happy finding herself and her independence without Pattinson, that doesn't mean the pair aren't on good terms. In an April interview with The Sunday Times, Pattinson said he's still friendly with his exes, and included both Twigs and Twilight costar Kristen Stewart in that statement. "They were pretty long relationships, not like three months," he explained. In the same interview, the actor noted that it was important to him to keep all of his relationships — both past and present — out of the spotlight, in order to protect what makes that romance so special.

"If you let people in, it devalues what love is. If a stranger on the street asked you about your relationship, you’d think it extremely rude. If you put up a wall it ends better," Pattinson said. "I can’t understand how someone can walk down the street holding hands, and it’s the same as when I do it and a hundred people are taking your photo. The line between when you’re performing and when you’re not will eventually get washed away and you’ll go completely mad."

While Twigs and Pattinson's romance didn't work out for them, it's clear that both are happier than ever, and using their past relationship to inspire their work and push them forward.

More like this
Olivia Wilde & Harry Styles Are Reportedly "Taking A Break" After Almost 2 Years
By Jake Viswanath and Radhika Menon
Jennifer Lopez Shares Rare Holiday Photos Of Ben Affleck & Her Twins
By Radhika Menon
Julia Fox Says She Dated Kanye To “Distract Him” So He’d Leave Kim K Alone
By Jake Viswanath
The 'Love, Lizzo' Harry Styles Scene Is Just 1 Moment That Made Fans Feel Seen
By Brad Witter
Get Even More From Bustle — Sign Up For The Newsletter