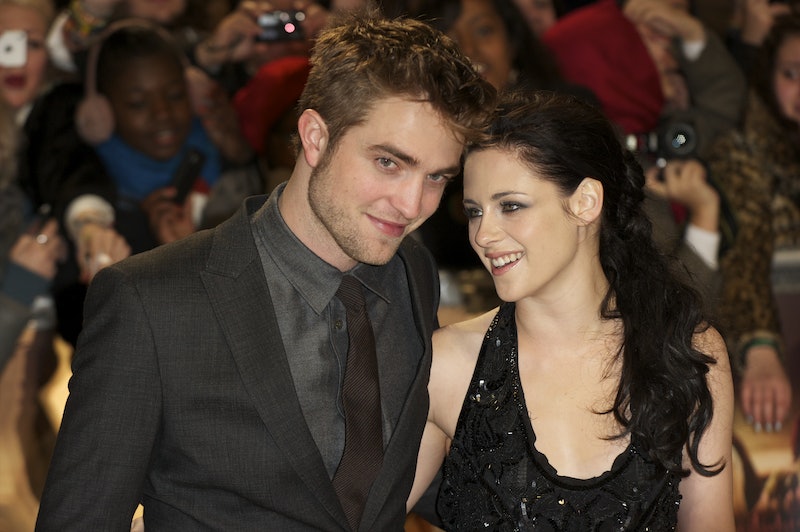 Once upon a time, K-Stew and R-Patz's off-screen relationship was the stuff of Twilight fans' dreams. Their characters in the franchise eventually got hitched, and as it turns out, that could've happened in real life too. During a recent interview on The Howard Stern Show, Kristen Stewart discussed her relationship with Robert Pattinson — who she dated for more than 3 years before parting ways in 2013 — and confessed that marriage was on her mind at the time.

Stewart and Pattinson were intensely private about their romance that was rumored to begin when they were 19 and 23, respectively. But over the last several years, both actors have occasionally opened up to reflect on the hysteria that surrounded them and why they chose to stay so guarded. "It's so weird actually being honest about [our relationship]," Stewart told Stern on the Nov. 5 episode. "I've actually never been allowed to just say what happened, because I was so self-conscious about seeming like an attention-seeker."

After discussing the rumors about their relationship being faked for publicity, Stern asked if there was ever a point where she and Pattinson would have gotten married. "I don't know," Stewart laughed nervously. "I wanted to."

Stern continued to push the topic and clarified, "If he proposed, you would've gotten married?" Stewart, still noticeably flustered, explained, "I don't know. I'm not a super-duper traditionalist, but at the same time ... every relationship I've ever been in, I thought that was it. I've never really been the most casual person."

In July 2012, Stewart was photographed kissing Rupert Sanders, her director in Snow White and the Huntsman. At the time, Sanders was married, and Stewart and Pattinson were still an item. The pair split briefly following the affair, ended up reconciling later that year, and finally split for good in May 2013. "People wanted me and Rob to be together so badly that our relationship was made into a product," Stewart reflected to T Magazine in 2016. "It wasn't real life anymore."

Stewart told Stern that she still thinks Pattinson is "the best," though. The former couple managed to keep in touch over the years, and even sparked romance rumors yet again after they were photographed together back in July 2018. Even though it was purely platonic, Stewart remains one of Pattinson's biggest fans. After it was announced that he'd be starring as the newest Batman, Stewart told Variety in September that Pattinson was "the only guy that could play that part." She enthusiastically continued, "I’m so happy for him."

As for their current love lives, Stewart was last linked to screenwriter Dylan Meyer back in August, following her nearly two-year relationship with model Stella Maxwell. Meanwhile, Pattinson has reportedly been dating Suki Waterhouse since around July 2018.