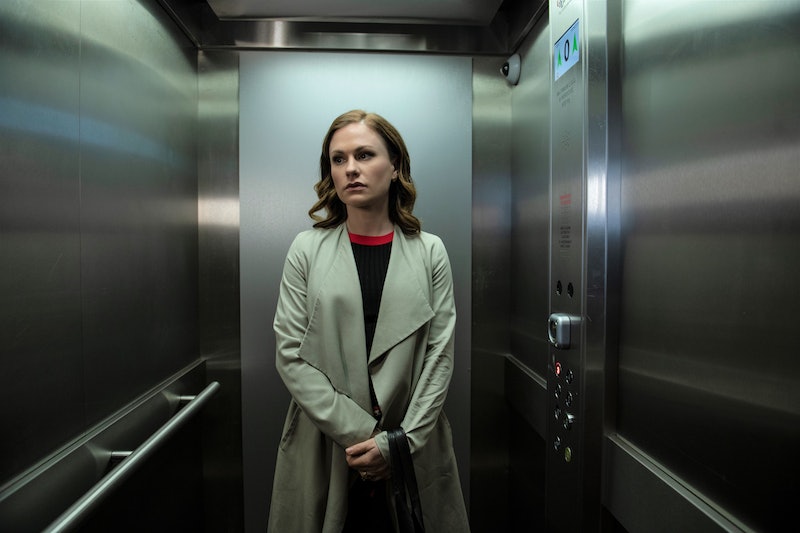 Anna Paquin has been a Hollywood staple since 1993's The Piano, for which, at 12 years old, she took home the Oscar for Best Supporting Actress. So when she tells Bustle over the phone that her new show Flack is unlike anything she's ever done or seen before, it means something. What makes Pop TV's Flack so unique, Paquin says, is that it's not just about powerful, working women, but about women who operate "without having to report back to some guy." In fact, much like her character in the series, Paquin isn't reporting to any man on this show either.

In Flack, Paquin plays Robyn, a publicist who is frequently called in as crisis management. As an executive producer of the show — she produces alongside her husband, Stephen Moyer, with whom she shares a production company, CASM Films — the actor prefers to prevent a crisis before it happens, and that means prioritizing the needs of her entire crew. It's a responsibility she does not take lightly, specifically when it comes to the safety and wellbeing of women, on set. "How other women are treated on set has always been something that has been on my mind, I just haven't always been in a position to ever really do anything about it," Paquin says. As a former child actor, she says, "I remember all the people who were kind to me [when] I was young and didn't know I had a voice yet. And I just think it's really important to pay it forward."

She's a little f*cked up about how she expresses it sometimes.

On the set of Flack, the actor says, she tries to make sure to check in with the people around her as often as possible. "I do try to make sure everyone knows that they can come to me if there is a problem. I want to hear about it, even if it's something really little," she says. Paquin is aware that everyone's sense of humor and comfort level is different, so creating an environment where people feel they can come to her is a top priority. "It's good for a person in my position to keep the conversation going, to keep checking in with people."

Paquin's character, Robyn, takes a similar approach when it comes to the women in her life, specifically her co-worker Eve (Lydia Wilson), her intern Melody (Rebecca Benson), her sister Ruth (Genevieve Angelson), and, to some degree, her boss Caroline (Sophie Okonedo), who make up the rest of the main ensemble. Even when Robyn, who is a delicate balance of good intentions and a complete mess, is at her lowest or most stressed, she always prioritizes checking in with the women around her. As Paquin herself describes, she's "ultimately protective of younger women," adding, "She's a little f*cked up about how she expresses it sometimes."

"A little f*cked up" is actually the perfect way to describe Robyn. A pro at cleaning up other people's messes, Robyn doesn't have any time for other people's excuses, but she can't stop making excuses for herself. She's a business woman, good at her job; she sleeps with a client in the very first episode. She's a devoted girlfriend and sister. She's also constantly lying about her sobriety and unsure about her relationship. She's a mess, but put together all at the same time.

There's no rulebook that we're playing by as far as what kind of choices she's allowed to make...

Robyn is pretty much the definition of a "complex female character," but she's also complicated in ways not often seen on television. For example, she lives with a fear of the mental illness her mother suffered from. Mental illness, while common in the real world, isn't all that popular on television. And that fact makes it even more important to get it right. "In general, I feel like not being afraid to be upfront about how mental illness affects people and their families and the choices they make moving forward in their lives and the long-term impacts — I think that's important to be open about," she says. It's just one of the facets of Robyn that makes Flack so unique.

"One of the things that I love about Robyn is that there's no rulebook that we're playing by as far as what kind of choices she's allowed to make, or what kind of things we do or don't want to see her doing," Paquin says. Robyn isn't an innocent protagonist, like Sookie in True Blood, but she's not quite an antihero either. "What we've got here is something that is completely unique, and I have not personally seen a show like this, or a character like this, and that to me is what's so fascinating about it."

Paquin has made a career out of playing interesting and unique women, from Fly Away Home, to X-Men, to Alias Grace. And now that she's not just acting in these stories, but producing them as well, it's only going to get more deliciously complicated.