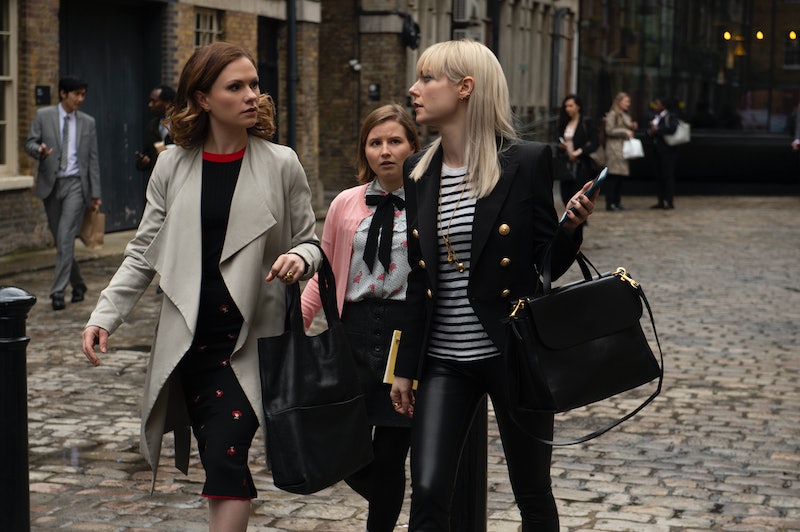 Premiering Feb. 21 on Pop, Flack follows a no-nonsense public relations representative named Robyn (Anna Paquin) whose personal life is a complete trainwreck. Her clients are high-profile London socialites whose messes she's responsible for covering up, which proves to be a sizable task. But while the premise sounds rife for real-life scandal, it doesn't appear that Flack is based on a true story.... which is probably good news, considering the kind of blunders Robyn is responsible for getting her clients out of.

"Robyn is a very skillful PR rep, who has an incredibly complicated personal life that she doesn't share with anyone — she's very good at compartmentalizing," Paquin told Deadline last June. "When we meet her, she is in the middle of a typical day at work about a client badly behaving. She's the one that's willing to go that extra mile at a lot of personal expense." Sounds like a certain Shonda Rhimes heroine, hmm?

Although it sounds like a stressful way to live, it's not too far off from what some PR reps have to deal with on a daily basis. "I one hundred percent believe that there are publicists that have to clean up spectacularly horrific messes on behalf of their clients," Paquin told the New York Times.

And while her character is a world class screw-up, Paquin is nothing like Robyn: she's had the same publicist since she was 12, per the NYT, and has a fairly normal life compared to her onscreen counterpart. However, that her Flack character's allowed to be a complete disaster is a huge deal and part of a growing TV trend.

"I see this era of television as one in which women's roles are interesting, flawed and, complicated, where they're not necessarily perfect," Paquin told Deadline in the same interview. "People are not going to mind that Robyn's not very sympathetic, they're going to be enthralled with the story, seeing a real human. There was a real fear [before] that people would switch off if girls weren't nice, but those girls are boring to watch and don't reflect who most of us are in general. It's nice that entertainment is catching up with reality."

Paquin met her husband, Stephen Moyer, on the set of True Blood, per Deadline, and the couple executive produced Flack through their company, Casm. As for the series script, it was originally written by Oliver Lansley for HBO before being picked up by Pop and UKTV, according to the same article.

But while Paquin's Flack character may be fictional, series creator Lansley told Deadline that he based Robyn on "dark, complicated and brilliant" women that he'd come in contact with. "There was this book that came out called Difficult Men, about the golden age of TV and complicated male protagonists such [as] Don Draper, Walter White and Tony Soprano," Lansley explained. "I wanted to write a show that the main character would become the character they would put on the cover of Difficult Women." (Not to be confused with the Roxane Gay book by the same name).

So while Flack is a fictional story, its characters were inspired by ornery women who've had to fight their way to the top of the food chain. It's still a man's world, after all.

More like this
Lisa Kudrow Explained How Her Body Image Changed While Filming 'Friends'
By Grace Wehniainen
Miranda Cosgrove Reacts To Jennette McCurdy’s Shocking ‘iCarly’ Revelations
By Grace Wehniainen
Every Horror Movie Reference In The 'PLL: Original Sin' Premiere
By Alyssa Lapid
An Ultimate Guide To The Music Of 'Rap Sh!t'
By Brad Witter
Get Even More From Bustle — Sign Up For The Newsletter