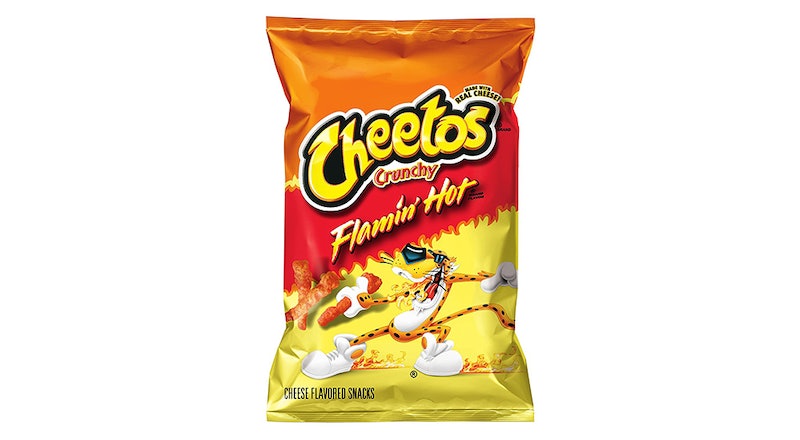 OK, I know what you're thinking after reading the headline of this story: A movie about a vending machine snack sounds ridiculous and likely just as poignant as your pinky finger. But, believe it or not, Hollywood might actually be onto something here — from what the early reports about Flamin' Hot Cheetos being made into a movie called Flamin' Hot are revealing, the project that's being planned based off the popular snack food might actually be good. Like, just as good as the snack itself, aka really good. (And no, it won't star Chester Cheetah. Sorry.)

Most popular items have interesting stories behind them, and it seems Flamin' Hot Cheetos is no different. Whether you already knew the origin story of this snack before or not, it'll be difficult not to find the reported plot of Flamin’ Hot interesting. In short, according to Variety, the film is being planned as a biopic that will tell the true story of the unsung hero, Richard Montanez, who created Flamin' Hot Cheetos while working as a janitor in California in the '70s. See what I mean? Once you put a name behind the snack, the story is already infinitely more interesting.

The story is as follows: Mexico-born Montanez moved to California as a kid, and after struggling to learn English in school, he ultimately dropped out of high school. He then went on to work as a grape-picker in a Southern California farm, before becoming a custodian at the Frito-Lay Rancho Cucamonga plant in 1976 — aka, the company that produces Cheetos snacks. There, Montanez would go on to change the company, his life, and snack aisles forever. Literally.

As it turns out, the whole spicy Cheetos craze actually traces back to a screw up at the Cheetos plant. Basically, when a machine malfunctioned in the factory, batches of Cheetos were left without their signature cheesy dusting. So as to not waste the defunct corn puffs, Montanez decided to take them home to experiment with. There, he was reminded of elotes, which is Mexican street corn that's served with a dusting of lime, salt, chile powder, butter, and cotija cheese. In a 2012 interview with Fox, Montanez recalls thinking, “I see the corn man adding butter, cheese, and chile to the corn and thought what if I add chile to a Cheeto?”

And really, the genius was as simple as that. It was pure intuition based on his knowledge of flavor profiles. The blank corn puffs turned out to be the perfect vessel for Montanez to bring forth a taste of his culture. According to Montanez, he shared his DIY snacks with his friends and family and the response was unanimous: this needs to exist.

This whole story is already sounding like an awesome movie, right? Just wait: Montanez went on to speak with the president of the Frito-Lay company to pitch the flavor — and this is where the real cinematic potential comes in. According to Variety, he went to the local library and taught himself the basics of marketing. He then put together a pitch-deck for the snack, and even a mock-up of the bag for spicy Cheetos. In other words, he went for it. This is literally a story of the American dream — honestly, it's surprising a movie wasn't made about it until now.

Of course, the Frito-Lay company loved Montanez's creation, and now Flamin' Hot Cheetos are one of the company's best-selling snacks. Today, Montanez leads Multicultural Sales & Community Promotions across PepsiCo’s North American divisions, proving that innovative people who are driven and ambitious can accomplish anything. You can work your way up to executive vice president if you believe in yourself and your ideas.

See? I told you this story would be so much more worth a film adaptation than you originally thought. No word yet on potential release date or even casting, but I'm excited at the prospect of this news nonetheless.

Now, if you'll excuse me, I need to go buy a bag of Flamin' Hot Cheetos to celebrate with.