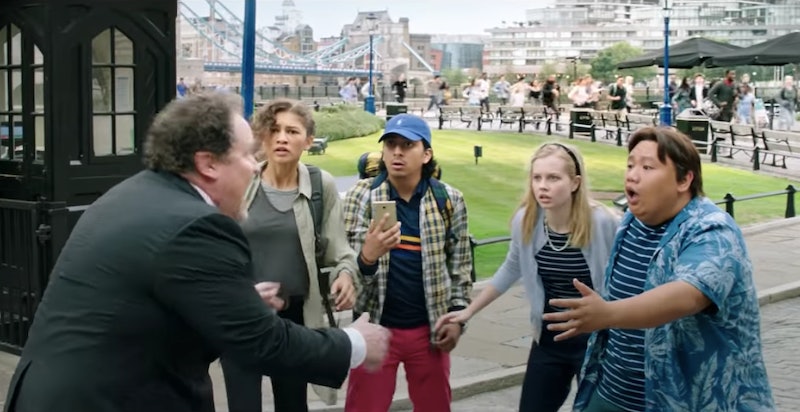 All three cinematic reincarnations of Spider-Man have been different — different Spider-Men, different storylines, and different villains. But Peter always has the same bully: Flash Thompson. In the latest iteration of the Marvel superhero's narrative, Flash (Tony Revolori) isn't a jock, but a rich, cocky kid who thinks he's better than Peter Parker (Tom Holland) in every way. He's also Spider-Man's number one fanboy, unaware the two are one and the same. But Revolori says that he wants to show a different side of Flash Thompson: the one that actually finds common ground with Peter.

"They have a long rich history in the comic books, being friends longer than [Flash] being his bully, actually, weirdly enough," Revolori says, speaking over the phone the week before Spider-Man: Far From Home hit theaters.

In the Amazing Spider-Man series, for example, Flash is actually the best man when Peter marries Mary Jane Watson. And though in the MCU it's been established that Ned is Peter's best best friend, Revolori says that, as the series moves forward — Spider-Man 3 is rumored to be on the way — Peter and Flash's potential friendship would be "really fun to explore."

The armor may already be cracking. While in Spider-Man: Homecoming we only ever see Flash insult and demean Peter, in Far From Home we see a little more depth to the character. Though he still bullies the undercover Spider-Man, there are moments when Flash shows vulnerability, especially when it comes to matters of family and home life. His Spider-Man fanboy tendencies also jump out a lot in the film — it's even the theme of his Snapchat name.

"I really wanted to portray him as apathetic as possible," Revolori says of his Flash. "Especially in this movie, we tried to hit that a little bit harder."

Major spoilers ahead! When Flash learns that Spidey might be in the area, he's rendered speechless. And even as new superhero Mysterio (Jake Gyllenhaal) comes along, the teen maintains that he's no match for his friendly neighborhood hero. But of course, he still maintains his dislike for his classmate Peter. So it'll definitely be interesting to see how he reacts when he finds out his "loser" classmate and idol are the same person, as Mysterio's video revealed.

"I think that's going to be a whole shock to his world. I can see him moping in his house, a lot of crying. Maybe burn all of his Spider-Man toys and stuff like that," the actor says, laughing. "I feel like he's going to go through the five stages of grief, too: denial, rage, bargaining, depression, and acceptance."

In real life, however, Revolori, Holland, Zendaya (MJ), Jacob Batalon (Ned), and the rest of the Midtown crew get along really well.

"We really worked hard to make sure this movie was as good as it can be, which is great. But, also, it was just really fun hanging out in town to be hanging out with the cast and the crew again," Revolori says. "It did feel like a school trip every time we traveled. We were all in a car together, getting to know each other better especially with the new cast members who joined." (That includes MCU Newcomer Remy Hii, who plays Brad Davis, one of the students who wasn't "blipped" and therefore aged while the rest of them were gone.)

The cast had London as their home base, but they also traveled to Venice — where the fictional field trip begins — and Prague. Revolori recalls that on their nights off, the cast would find themselves at the London apartment complex where he, Hii, and Batalon resided.

"We would all just have a glass of wine and just hang out. I think those are the best moments, just relaxing with everyone and having a good time," Revolori says.

Hopefully, Flash and Peter will take a hint from this tight-knit cast and start getting along. In addition to easing some of the tension between those characters, Revolori would also like to see Flash step up as a hero of sorts himself.

"I would personally love to portray some of the wonderful things [Flash] has done in the comic books, and really see him grow as a human being," the actor says. In the first volume of The Amazing Spider-Man, Flash, inspired by Spider-Man, joins the military to be of service to his country — but not before squashing his beef with Peter once and for all. And in issue #138, when Peter is all out of options and has nowhere to go, Flash offers up his home.

But if the MCU does decide to follow the Amazing Spider-Man narrative, Flash and Peter's friendship would eventually hit a major roadblock. In a 2011 issue, Flash actually becomes Venom. This happens in a storyline reboot, wherein, instead of the Vietnam War, Flash goes to fight in Iraq, winds up losing both of his legs, and is awarded a Medal of Honor. He becomes the new Venom (after MacDonald Gargan, who was arrested by the U.S. Government) when he's enlisted to Project Rebirth 2.0, a super-soldier operation using captured symbiotes to create new super-soldiers.

But the MCU isn't known to follow the comics religiously — plus, Tom Hardy is currently playing Eddie Brock in Sony's Venom series — so there's really no telling yet whether Flash will be taking on another identity in this universe, or how his and Peter's relationship may change. So it looks like fans — and Revolori — will have to wait until we hear more about the (still-unconfirmed) third Spider-Man film to see how this iconic bully evolves.