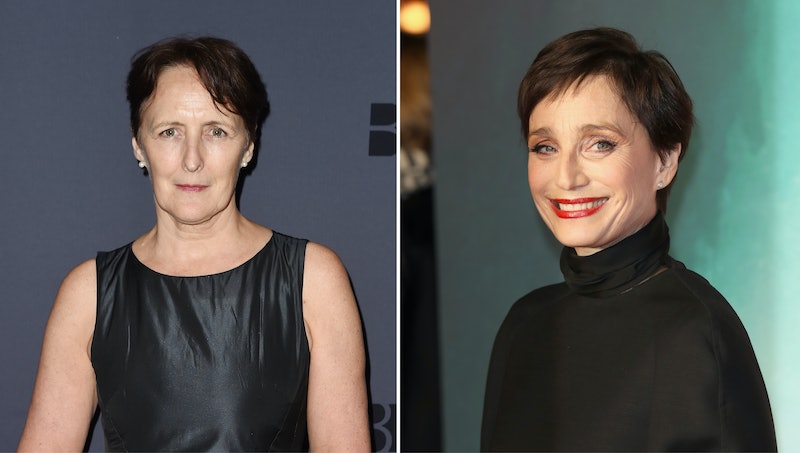 If you've been waiting with bated breath for news on the return of Phoebe Waller-Bridge's Fleabag, you're in total luck. In a press release sent to Bustle UK, it has been announced that a second series will premiere this spring on BBC Three and Amazon Prime Video. Not only that, but Fleabag season two will star Kristin Scott Thomas and Fiona Shaw.

If you're familiar with Waller-Bridge's recent adaptation of Killing Eve for the BBC, you'll be aware that Shaw brilliantly portrayed Carolyn Martens, Head of the Russia Service at MI6. If not, you'll totally recognise her from her role as Aunt Petunia in Harry Potter, as well as her portrayal of Marnie Stonebrook in the hit HBO series True Blood.

Thomas will also be a familiar face thanks to her recent role in the Winston Churchill biopic The Darkest Hour, where she portrayed Churchill's wife Clementine. She also played the role of John Lennon's aunt Mimi Smith in 2010's Nowhere Boy, and earned an Oscar-nomination for her role in 1996 film The English Patient. "[Waller-Bridge] manages to hit core issues with sledgehammer brutality as she trips along with a spring in her step," Thomas said in the press release. "I laughed helplessly as I binge watched the first brilliantly funny series and enjoyed being aghast at times. I was very flattered to be asked to be in Series 2."

Filming for the second series began last August, as reported by the BBC, with the scripts seemingly being finalised a few months prior. “The series two scripts are knockout — sparkling with Phoebe’s unique voice that combines a whip smart complexity of character with pin sharp funny lines scattered everywhere,” Comedy Commissioner Shane Allen told the BBC at the time.

“The themes of this series are very distinct from the first series which delivers on the challenge Phoebe set herself. It’s a superb team and cast from top to bottom and with Fleabag you can never escape a reference to the bottom."

It certainly sounds like the second series will be as fantastically absurd as the last. Picking up a year after the events of the first series, Fleabag (Waller-Bridge) meets a whole host of new characters — including a Priest portrayed by Andrew Scott — “who jolts her into seeing the world in a different way.” Basically, it’s “Fleabag Vs God” as it is aptly described in the press release. Yeah, I can’t wait to see where that road leads either.

While there’s no word as to what characters Shaw and Thomas will be portraying for this series, I’m so excited to see them work alongside the likes of Olivia Colman, Hugh Skinner, Sian Clifford, Jenny Rainsford, and of course Waller-Bridge herself. “I can’t believe they let me do this AGAIN,” she previously told the BBC. “I’m so happy to be back with the incredible Fleabag team and I’m as surprised as anyone about where this series has taken us.”

Well, it looks like I’m going to be marathoning the first series until the premiere date is announced, that’s for sure.