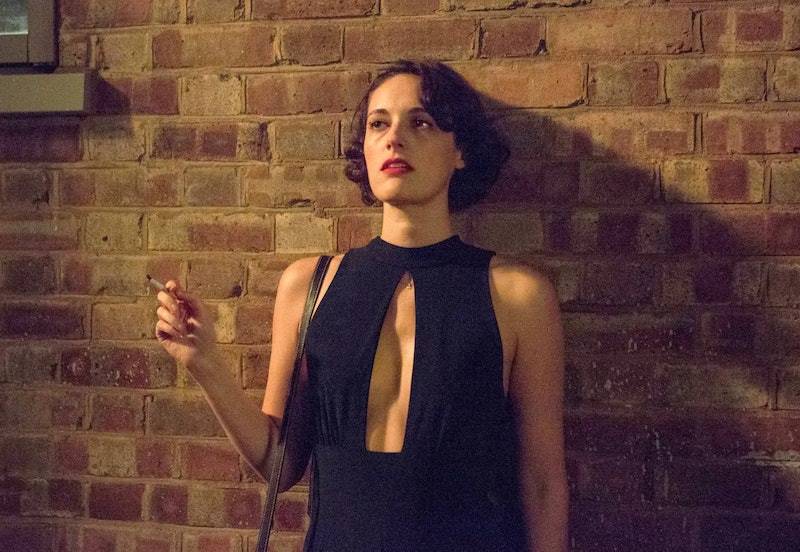 Who doesn't love Fleabag? The hit BBC comedy has been not only groundbreaking but also effing hilarious. Seeing it end has been really hard work. You know like, enjoying each episode but on the flip side also feeling increasingly devastated as each week goes on. However, it looks like "the Fleabag effect" is a thing, but maybe not as you expect it. Because Fleabag's black jumpsuit has sold out — but do not fret, there's still a way to get your hands on it.

I'm not sure about you guys, but since Fleabag and Derry Girls ended in the same week I feel actually bereft. If not for the LOLs, but for the lewks. Our gal Phoebe Waller Bridge knows how to dress but the one stand out item is that playsuit. You know, the one from episode one with the eye watering décolletage that leaves us larger chested girls in the shade?

According to the Guardian, the jumpsuit is made by the London-based label Love. Designer Teri Sallas revealed that the cheeky black number sold out within a flipping day of the show airing. They were so pleased with the sales that they went on ahead and put another 500 into production which will be available from next week. Meaning basically, fear thee not, you can still bag your own slice of TV fashion history.

Sallas spoke about how they were initially shocked by the sudden jump in sales in the brand's online shop, which is beloved of the likes of Katy Perry and Little Mix.

"At first we were thinking, 'hang on, what's going on?' and then we managed to locate [why it was selling so fast]. It's fantastic for us. Luckily we just had a delivery of that cloth and because everything is made in north London it is quicker to get things done".

So is Sallas a fan of the show? Although she hadn't actually seen the show previously she is now a big fan of the hit BBC show. I mean she probably ought to be considering the boost it has given to her sales. She also said that now she has watched the show, she sees how perfectly Fleabag fits her brand.

"It's strong and makes a statement. I wanted to make something that covered everything up but was still sexy – and she looks fabulous in it".

Damn straight. Thing is though, the Fleabag effect goes further than the playsuit. Seemingly, anything that Waller-Bridge chucks on herself that sends fans wild. The slinky little red number she sported in the finale at her dad's wedding was also a big hit. The Guardian reports that according to the search engine Lyst, searches for red dresses surged by a mighty 38%. I know right — that's huge. The dress in question comes from a pretty cool brand, as the show's costume designer, Ray Holman, revealed when he shared details on the dress with Metro.

So not only is Waller-Bridge an incredible writer and actor — she is also a style icon? Oh, and G&T influencer: as Radio Times reported, there has been a surge in sales of M&S's very own gin in a tin. If I didn't love her so much I would be well jeal. Who knows what is next for Waller Bridge, but needless to say, it will be bloody marvellous.