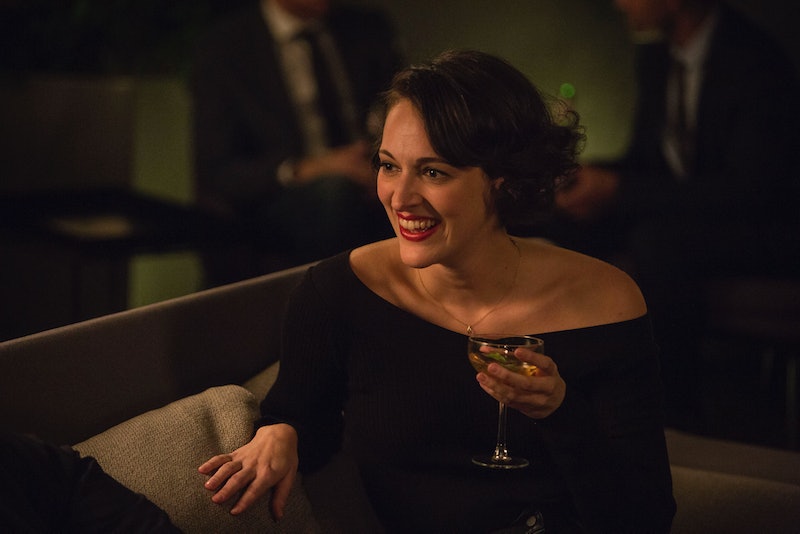 Once feared and fancied at the same time when he played Cumberbatch's rival Professor Moriarty on Sherlock, Andrew Scott has since got the nation really, really into priests. He plays Fleabag's sexy, ecclesiastical love interest on the second season of Phoebe Waller-Bridge's much hyped tragicomedy, and now the nation is even mimicking his drinking habits, with his beverage of choice getting sipped all over the country. Yep, apparently Fleabag is boosting M&S gin and tonic sales. And I am shook.

On Wednesday, M&S told the Radio Times that they'd seen a 24 percent rise in sales of its own brand tinned gin and tonics, which they attribute to the second episode of Fleabag Series 2 which aired on Monday. When the priest revealed a few of the M&S brand cans stashed away in his sacristy, Fleabag couldn't help herself and the pair got stuck in to a highly inadvisable day-drinking sesh.

As an M&S spokesperson told Radio Times: "This isn’t any G&T in a can, it’s an M&S G&T in a can… An absolute favourite with M&S customers, as well as the occasional vicar, as seen recently on the hit show Fleabag. In fact, sales are up 24% since its TV appearance, as even more customers get their hands on the iconic drink, perfect for on-the-go!” Wait a second. Technically, he's a priest, not a vicar. Do you even watch the show, M&S?! I'm disappointed.

Jokes aside though, I can't help but feel a little bit concerned that the nation is quite so thirsty for the G&Ts. While the M&S can has become synonymous with long train journeys and long, hot summer days in the park, I definitely wouldn't recommend stashing it away during your day job, and drinking it before lunch, as Scott's character does. If you're worried about your alcohol intake — M&S can or otherwise — then head over to the NHS website, where you can get a lowdown on recommended limits, and assess whether you might be going a bit overboard with your M&S cans.

At the end of the day, perhaps it's hard not to become a little bit influenced by Fleabag's bad decisions, when you've been watching the show for the past few weeks and probably catching up on Series 1 too, am I right? But in my opinion, the actions of Phoebe Waller-Bridge's character should be a lesson on how not to behave, which is why I feel a little concerned that the nation is taking any tips from her or her mates, whether they're men of the cloth or not.

Although to be fair, opting for a couple of M&S cans is probably not the worst drinking choice you can make, or inspiration you can take from Fleabag. So, keep drinking the cans — in moderation — and curling the ends of your hair, and rouging your lips, but make sure to cut the ties there. That's the only Fleabag-esque behaviour I'll allow in real life, thank you very much.