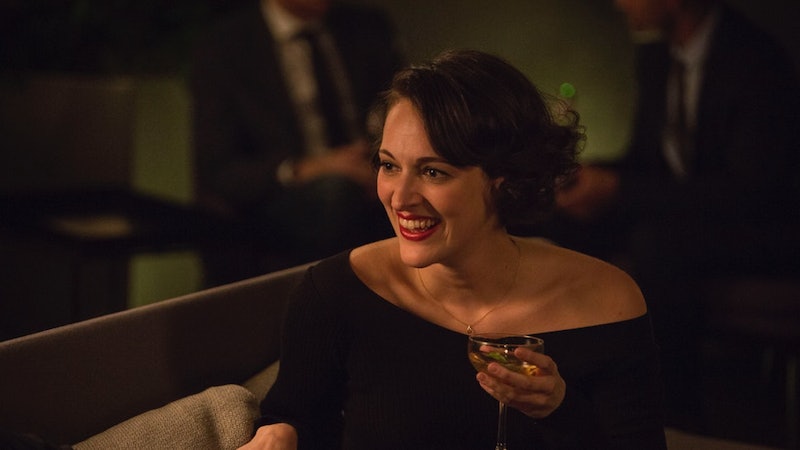 Fleabag is back on the West End, and naturally, tickets to the revival of the one woman show that became a TV phenomenon are completely sold out. As a result, dedicated fans have been queuing at the box office of London's Wyndham Theatre, hoping to secure a ticket on the day. On Saturday, however, even the queuers who didn't land a ticket got a pretty excellent consolation prize: Fleabag's Phoebe Waller-Bridge and Andrew Scott handed out cans of Marks and Spencer gin and tonic, as the Guardian reports. And what could be better queuing sustenance than the Hot Priest's drink of choice?

In videos posted on Twitter, Waller-Bridge and Scott make their way down the queue, handing out cans and looking extremely pleased about it. ""How are you? Have some gin! I hope you get a ticket — it's a very good show," Scott tells fans, with Waller-Bridge adding, "Thank you for coming!" Marks and Spencer will no doubt be thrilled with the extra promo — after all, sales of their canned gin and tonics rose by 24 percent after they appeared in the second season of Fleabag.

A woman named Alexei, who was there to see the giveaway (and presumably received a G&T), later told the Guardian, "No one could believe it was actually happening! Phoebe Waller-Bridge thanked everyone for waiting for hours and said that she hoped people would get tickets and would enjoy the show." Alexei added, "It was a huge surprise to everyone and was very nice of them. Everyone was in shock."

One person who most likely didn't have to queue for a ticket? Taylor Swift, who was spotted watching Fleabag from a box at the theatre on Friday night, as Metro reports. Swift is an enormous fan of the show; what's more, she'll be appearing on Saturday Night Live alongside host Waller-Bridge on October 5th. "Ever since I saw Fleabag, I’ve been all ‘I can’t wait to see this woman host @nbcsnl’ and it’s happening now + I get to be there too = I am in shambles," she tweeted when the news broke in August.

Allow me to leave you with one more lovely Fleabag + Hot Priest moment. Waller-Bridge presented Scott with the Standout Performance Award at the GQ Men of the Year Awards earlier this week, as Stylist reports — and Scott dedicated the best part of his acceptance speech to her. "I’m so grateful to her because she’s of course the reason I’m standing here," he said.

"When we first talked about doing Fleabag together we wanted to talk about the extraordinary way that love manifests itself in the world and I’m just so thrilled that the world has been able to see Phoebe’s qualities because that’s what has touched the world, those qualities of generosity," Scott continued. "She’s an incredibly generous person. She’s actually just done a play tonight in the West End so for her to come here and present this to me is amazing."

He finished by speaking directly to Waller-Bridge: "I really hope that our relationship for the rest of our lives because I love you so much and I’m so grateful to you," he said. If you'll excuse me, I have feelings that I need to address with a can of gin and tonic.