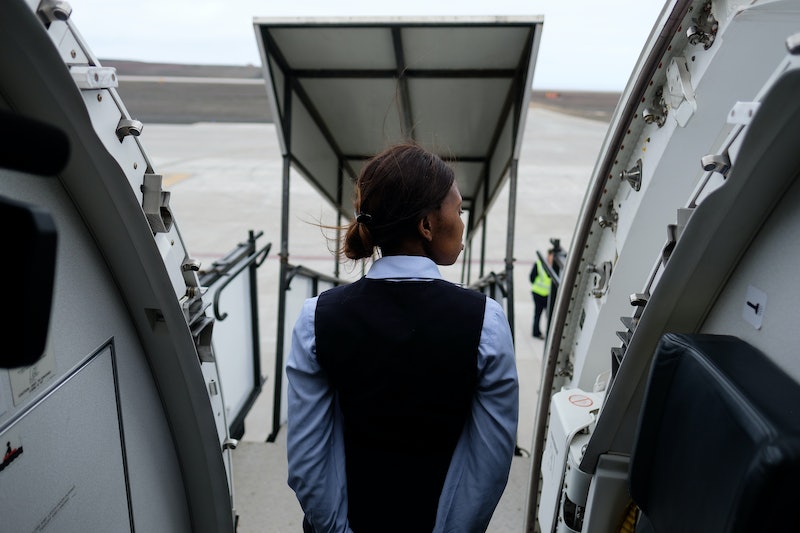 Being a flight attendant looks like a pretty sweet job at first glance — but it's so much more than getting to travel the world. Flight attendants and cabin crew members work long hours, don't see their families often, and often have not-so-great schedules, on top of being responsible for hundred's of people's safety in the event of an emergency. But a new study published in Environmental Health is highlighting another kind of risk that flight attendants face: Flight attendants' cancer risk is higher than that of the general population, and the reasons why are pretty alarming.

Researchers from the Harvard T. H. Chan School of Public Health analyzed data from 5,366 flight attendants and found that 15 percent had had cancer at some point. Breast cancer and melanoma rates were both higher than in the general population. Also, flight attendants who'd worked in the industry for a long time had a higher risk of developing non-melanoma skin cancer. Researchers cited circadian rhythm disruption — aka, constantly disrupted sleep schedules — ionizing radiation, and chemical contaminants in plane cabins as possible causes. Study author Irina Mordukhovich was quoted in a press release, saying that the research is among "largest and most comprehensive studies of cancer among cabin crew to date."

This new finding comes as part of a larger study, the Flight Attendant Health Study, that was established in 2007. But this isn't the first study to look at the health of people who work far above us. A study in 2003 reported higher cancer rates among flight attendants, but this Harvard study has a large number of participants and zeroes in on specific cancers. Flight attendants don't exactly have the most comfortable sleeping quarters, which accounts for the circadian rhythm disruption mentioned by researchers. If you're only grabbing a few hours of sleep a day, your sleep patterns will be affected, according to WebMD, which can up your risk for certain diseases. And jet lag also has a huge impact on your internal clock, which means that flight attendants who regularly make international journeys are at a higher risk of disruption.

Cosmic ionic radiation sounds scary, but if you've ever flown in an airplane, you've been exposed to it. It's radiation that comes from the stars, according to the Centers for Disease Control & Prevention, and it's unlikely to affect your health if you're just traveling for vacation — the CDC says a flight across the U.S. exposes you to less radiation than an X-ray — but years of exposure could eventually affect you. Mordukhovich says the study should be used to make things safer for cabin crew and minimize unnecessary exposure.

Still, the authors of the study don't directly say that becoming a flight attendant means one is more likely to develop cancer — cause and effect couldn't be determined during the research, according to the press release. Additionally, the comparative rates of cancer were fairly small — 0.15 percent of the female flight attendant population reported having uterine cancer, compared to 0.13 of the general population. But if you're not in the U.S., you may not even need to worry: This may not apply to flight attendants overseas. "The authors point out that [United States-based] flight crew are subject to fewer protections than most workers in this industry, which may limit the generalizability of the results," the release says.

If you're thinking about becoming a flight attendant, this shouldn't dash your dreams — but it is a nudge to both airlines and the federal government that flight attendants need protection and shouldn't put their health on the line to do their jobs.