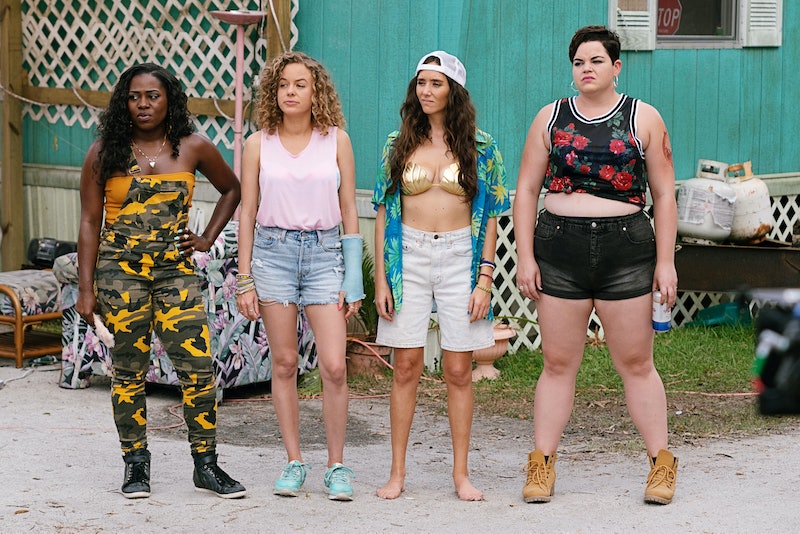 TV certainly has no shortage of coming-of-age stories, but Pop's new half-hour comedy, Florida Girls, is based on one true to life. As reported by CBS, the series is inspired by creator and star Laura Chinn's own upbringing in Clearwater, Florida. Set in a small beach town, it follows four Florida friends — Erica, Kaitlin, Shelby, and Jayla — who find themselves reevaluating their idle lives after their only ambitious friend moves away to chase her dreams. Together, they're left to "navigate life's curveballs while living below the poverty line," according to Pop.

If that's not enough to pique your interest, the Florida Girls trailer certainly will be. In it, the women discuss whether they should go back to school and leave Florida like their friend Mandy because, according to Shelby (played by Chinn), all they do is "get hammered and do dumb crap." But Kaitlin insists that they will be Florida girls forever. So, they scrounge together their collective change to buy things from a store before getting into several situations filled with booze, dancing, and bad choices.

Overall, Florida Girls seems like a cross between Girls and Broad City, following a group of women stuck indefinitely in stunted adulthood, and all the wild hijinks that brings for them. "I was like, I don't want to research some boy's perspective," Chinn, who is 33, told CBS of the show. "I grew up with a group of girl friends and we were a very tight-knit group, and there weren't dudes in our group other than guys we dated. My experience in Florida was very female, so those were always the stories I wanted to share."

Obviously, Chinn did, eventually, find her way out of Clearwater, but she spoke about how her childhood there helped to shape the series. "The town that I grew up in was like 50% Black and 50% White," Chinn continued. "There's, like, poverty and then there's extreme wealth and everyone is kind of living up against each other. It's a very interesting place to grow up."

As far as how closely Florida Girls mirrors her own life, Chinn said the characters are heightened versions of herself and people she knows, but that she was careful to ensure the storytelling was authentic. "Every step of the way we were very careful and cautious, in terms of wanting to make sure that the message we were trying to get out was correct," she told CBS. "When you're talking about race, poverty and women's rights, it's very sensitive. I wanted to make sure our point of view was on the right side of things, even though some of the characters were having more flawed points of views. I definitely wanted to make sure that at the end of the episodes you were getting the right takeaway."

Hopefully, Florida Girls will resonate with viewers — whether because they can relate to the women and their stories, or simply because they fall in love with the world Chinn has created.