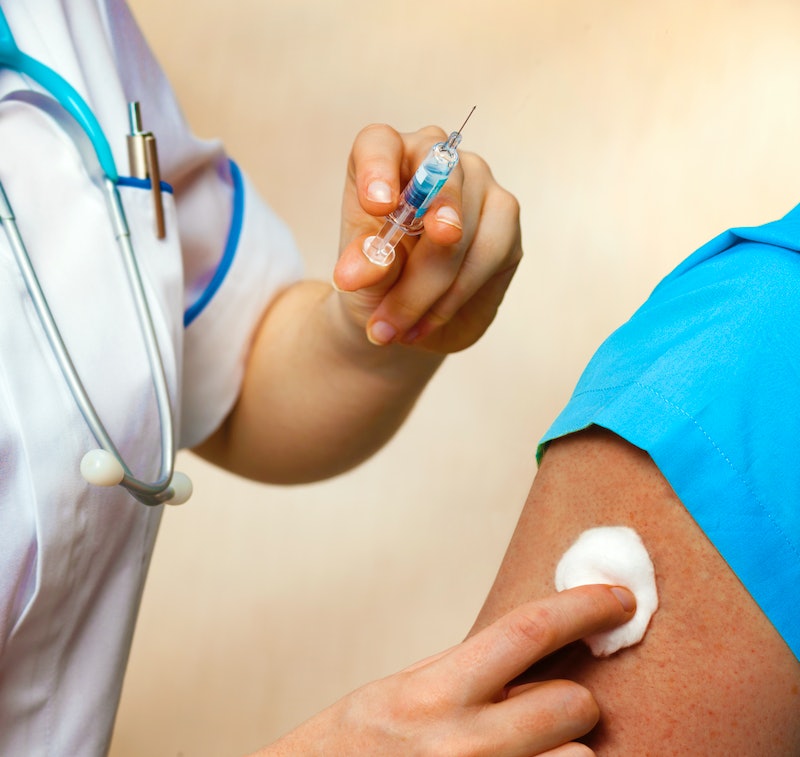 Heading into the new year and the new decade, the flu season seems to be picking up proverbial steam. That in and of itself isn’t unusual, NBC News reports — flu season typically hits a peak between December and February. But according to the Centers for Disease Control and Prevention (CDC), the particular type of flu activity prevalent so far this season is unusual, because the type of virus that's spreading so far isn't usually dominant until the early spring. Because of this, the 2019-2020 flu season might last longer than usual.

Typically, there's a particular major flu virus strain that impacts the beginning of flu season. Influenza A virus strains, the CDC says, usually affects the most people during the beginning of flu season, around October. This year, however, the flu is "starting out in a distinctive way," Dr. William Schaffner, an infectious-disease expert at Vanderbilt University and medical director of the National Foundation for Infectious Diseases told NBC News. Unlike most years, this winter influenza B strains are hitting people the hardest, even though the B strain doesn’t usually surface until after the regular flu season has peaked. This early rise of flu activity suggests the influenza season might be "prolonged," Dr. Schaffner told NBC.

The early start could also be a sign of a more severe season. "The last time the flu arrived this early was the 2003-2004 season, which turned into a fairly severe one," TIME reported.

This year, the CDC says in its weekly influenza surveillance report, there are 23 states experiencing early and high rates of influenza outbreaks — last year, only three states were reporting widespread activity at this time. Still, the rates of hospitalization are relatively the same as they were last year at this time. While 23,000 people hospitalized for the flu may seem like a lot, relative to the 2.6 million who have so far reported having the flu so far this year, it's not a higher number than usual.

This might be because the influenza B strain doesn’t typically infect very young children or older adults; it typically infects young adults, who are less vulnerable to complications from the flu requiring hospitalization. As a result, the number of people being hospitalized for the flu is actually about the same as they were this time last year, NBC reports.

Given the prevalence of this unusual strain for this time of year, it’s important to remember that there’s still time to get a flu shot if you haven't gotten one yet. A CDC-supported 2018 study published in the journal Vaccine found that even if you get the flu after receiving a flu shot, your symptoms are likely to be greatly reduced and your length of time spent being sick is likely to be shorter. If you're able to get the flu shot, it's important to do so for the sake of minimizing the risk for people who aren't able to. "Flu vaccination is always the best way to prevent flu and its potentially serious complications," the CDC reports, both for you and the people around you.

If you’ve already gotten the flu, you’re likely done for the season. But especially because it’s “going around” so hard, so early this year, it’s important to look out for symptoms of the flu. These symptoms can include a fever, sore throat, muscle or body aches, headaches, and vomiting, according to the CDC. You’re also encouraged to stay home from work if you have flu-like symptoms to prevent its spread.

More like this
23 Super Sweet Things To Write In A Valentine's Day Card
By Karen Belz and Lexi Inks
How Ovulation Affects Your Sense Of Smell, Libido, & More
By JR Thorpe and Lexi Inks
An Expert Weighs In On The Viral Raw Carrot Salad Trend
By Alexis Morillo
10 Primal Movement Exercises That'll Improve Your Mobility
By Carolyn Steber
Get Even More From Bustle — Sign Up For The Newsletter
From hair trends to relationship advice, our daily newsletter has everything you need to sound like a person who’s on TikTok, even if you aren’t.