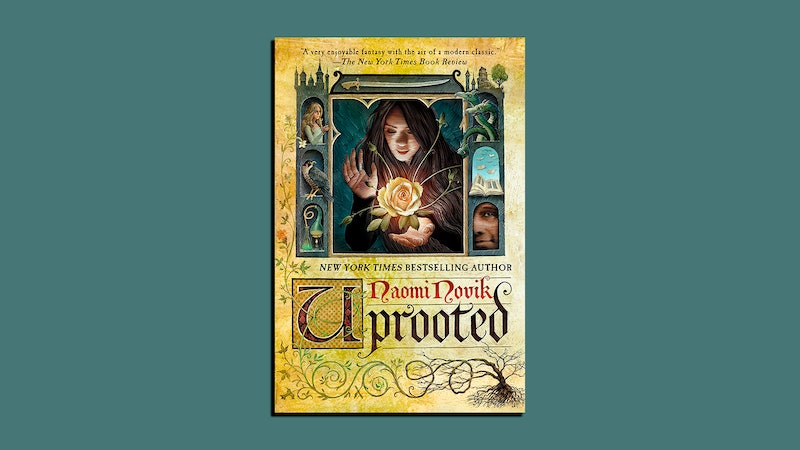 Each month, the Bustle Book Club asks an author to recommend a book they think everyone should read. In October, Jade City author Fonda Lee recommends Uprooted by Naomi Novik.

It's October, which means it's time to indulge in creepy stories, horror novels, and eerie thrillers. Or, if you can't deal with anything too scary, maybe just some books about witches, or werewolves, or vampires — sans spooks. If you're in the mood for a witchy story that's full of adventure, romance, whimsy, and a little bit of horror, then Bustle Book Club's October selection, Uprooted by Naomi Novik, is perfect for you.

Uprooted is the story of young Agnieszka, who lives in a small village that sits on the egde of a corrupt, dangerous forest. The villagers are kept safe from the evil forces of the forest by a mysterious sorcerer known only as the Dragon. In exchange for his protection, he demands a terrible price: Every 10 years, the villagers must hand over a teenage girl to serve him in his lair. Don't worry, he doesn't kill them, as made clear by the novel's first line: "Our Dragon doesn’t eat the girls he takes, no matter what stories they tell outside our valley." In fact, they come back more rich, more beautiful, and more polished than before. When the choosing comes, Agnieszka is sure it will be beautiful, graceful Kasia — but instead, the Dragon chooses her, and opens her eyes to a world full of magic and darkness.

Here's why she thinks you should read Uprooted:

"I recommend Uprooted by Naomi Novik to anyone looking for a captivating fantasy novel that turns out to be so much more than its fairytale trappings would have you at first believe. Yes, there is a captive maiden, a wizard in a high tower, a prince searching for a lost queen, and dark magic in an evil wood, but Novik manages to take familiar elements and spin them into something wholly fresh and engaging on its own terms. Also, unlike many fantasy stories that require a commitment to multiple door-stopper volumes, Uprooted is a single, emotionally satisfying standalone novel, making it a perfect book club pick."

Uprooted shares similar themes with Fonda Lee's fantasy novel Jade City, which centers on four siblings who battle rival clans for control of Kekon's capital city after a powerful drug hits the market that allows anyone to wield the power of Jade, a powerful substance that has been used by those in Kekon to channel their magic and protect their island. Like Uprooted, at the beating heart of Lee's novel are young people with magic and power beyond their imaginations, making it the perfect book to read on a chilly October night.

Follow along at Bustle Book Club, and order Uprooted by Naomi Novik and Jade City by Fonda Lee now.