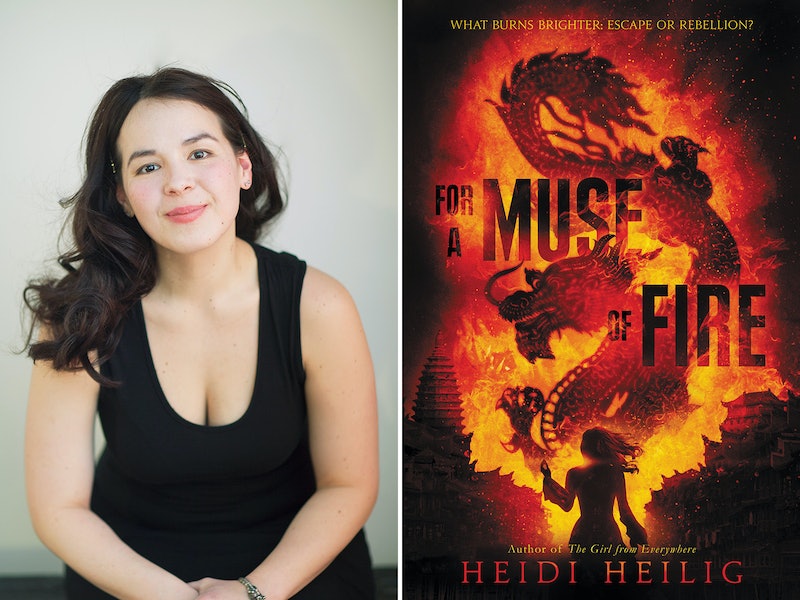 In her stunning 2016 debut The Girl from Everywhere, Heidi Heilig took readers on an adventure beyond the open seas, and across the boundaries of space and time. Now, the acclaimed young adult author is back with a brand new trilogy, and Bustle is thrilled to share the cover and an exclusive excerpt from For a Muse Fire, out Sept. 25 from Greenwillow Books, below.

In a land ruled by a terrible tyrant and torn apart by threats of war and rebellion, Jetta and her family are known for their beautiful, almost magical, puppet shows. The trick is to make the puppets appear to move without sticks or strings. But the truth is Jetta has a secret ability that allows her to see the recently deceased and bind them to her puppets using her own blood. When the family's talents land them a coveted performance spot aboard a royal ship to Aquitan — a ship that is rumored to have a magical spring that cures all ailments — Jetta makes it her mission to uncover the cure for herself. Along the way, she meets a young smuggler with secrets of his own to protect, and Jetta finds herself face-to-face with difficult truths and impossible decisions that will change everything.

The first in a brand new young adult series, For a Muse Fire promises to have everything fans of Heilig have come to love her for: stunning storytelling, spellbinding fantasy, and a complex heroine readers won't be able to help but cheer on. Oh, and did I mention the book's absolutely gorgeous cover? See for yourself below:

Can't wait to meet Jetta and learn more about her mysterious powers? For a Muse of Fire doesn't hit shelves until September, but you can start reading an exclusive excerpt the from the first installment of Heilig's new trilogy, below:

The most thrilling moments in life are when everything comes together.

The delicious chords when harmony joins melody. The way a scrap of leather, a shaft of light, and a clever player can make a shadow come alive. Or the roar of an audience after a show—when they become a creature with many heads and one heart.

Sefondre, the Aquitans call it—to coalesce. I love that word. Madame Audrinne once used it to describe our performance as she toasted us in the parlor of her plantation. I’ve remembered it ever since.

"The most thrilling moments in life are when everything comes together."

Will it happen tonight at La Fête des Ombres? The signs are promising. The weather is holding clear—just right for the outdoor stages. Papa’s voice is rich and steady as it floats through our roulotte’s carved scrollwork; he is singing a story song as he drives. Beside him on the bench, Maman keeps perfect time on the thom. Inside, I direct the little shadow play that flickers on the silken scrim that makes up one side of our roulotte. A thick stack of flyers lies beside me, ready to tout tonight’s show. And I’m wearing my best costume—a scarlet wrap with ruffled edges, a red silk shawl draped artfully over the rippled scar on my shoulder, and a striped corset in a nod to Aquitan fashion. My dark hair is swept into a twist, the stray ends patted down with a touch of oil, my eyes smudged with bone black and my lips with lucky red. A compelling picture for the Aquitans in the audience: local color, foreign polish.

Everything is nearly perfect. All except for the ghost of a kitten that won’t stop pouncing on my fantouches.

I don’t know where she came from, or where her body is. The little arvana must have crept into our roulotte when we stopped for a quick meal on the edge of town—tempted by our food, no doubt. Then again, does it matter why or where? There is no shortage of spirits in Chakrana. The more pressing question is, how can I get her to leave?

"Everything is nearly perfect. All except for the ghost of a kitten that won’t stop pouncing on my fantouches."

Being easily distracted is one of the tamest parts of my malheur, and I can’t afford any distractions tonight. Not at La Fête des Ombres.

“Shoo,” I whisper for the third time, fluttering the stack of flyers at her, but she only scampers behind one of my pillows. Spirits usually aren’t so persistent—unless they smell an offering. But I have put away the rice and the incense too—nor am I about to offer her any blood.

At least she isn’t interfering with the play itself. Her little paws, formed of flickering orange flame, pass right through the silk and leather of my fantouches, my shadow puppets. The souls I’ve tucked inside them ignore her better than I do. They dance in the air, between the scrim and the palm-oil lantern, going through their choreography with minimal direction from me.

They know the play by rote. It’s the one we perform every time our roulotte crosses into a village—a traditional folktale about long-lost lovers meeting under the moonlight. A little taste of our skill, a way to drum up an audience as we travel through town. The two lovers are played by jointed leather dolls no larger than my hand and ensouled with the spirits of hummingbirds; the moon is a disk of gold silk stretched over a circle of green bamboo, buoyed up by the spirit of a carpenter bee. But I can’t take my eyes off the kitten’s ghost as she bounds back and forth across the floor of the roulotte.

Thankfully, I’m the only one who can see her; she casts neither light nor shadow to the small audience we’ve already gathered. I catch glimpses of them through the scrollwork: a rambunctious pack of Chakran children, barefoot on the road, a pair of older men walking slowly side by side. A modest group, but there is delight on their faces as they watch the graceful dance of light and dark: the lovers meet and part and meet again, moving in time to the music, and all without stick or string. Just as it says on the flyers. That is what sets us apart from all the other troupes in Chakrana, why some people say the Ros Nai is the best shadow troupe in the country—maybe even the empire.

"Thankfully, I’m the only one who can see her; she casts neither light nor shadow to the small audience we’ve already gathered."

I grimace as the kitten starts to climb the scrim: the praise might not be so effusive if the audience knew how I controlled my fantouches. Souls and spirits are the realms of monks and their magic, and all the old ways are forbidden ever since La Victoire, when the armée pulled Le Trépas from his bloody altar and imprisoned him in his own dark temple. If they knew what I was doing, I could be thrown in the cell beside him. Though it chafes, Maman’s refrain is the most important line I’ve ever learned: never show, never tell.

We keep our secrets close. There is a latch on both sides of the door to the roulotte, and when we perform on stage, my parents guard the wings. Despite the danger, I can’t afford to stop. When my brother joined the armée, my parents and I had to find a way to keep performing without him—especially after his letters suddenly ceased, along with the money he was sending home each quarter. No one would pay to watch a show with only one puppeteer—not if we were using the traditional methods.

But even if we could, I don’t want to go back to the way things were. There is a thrill in fame. Besides, who would look at me and guess what I could do? I am no tattooed monk, no nécromancien, no power-hungry monster who thinks herself a god. I am just a shadow player.