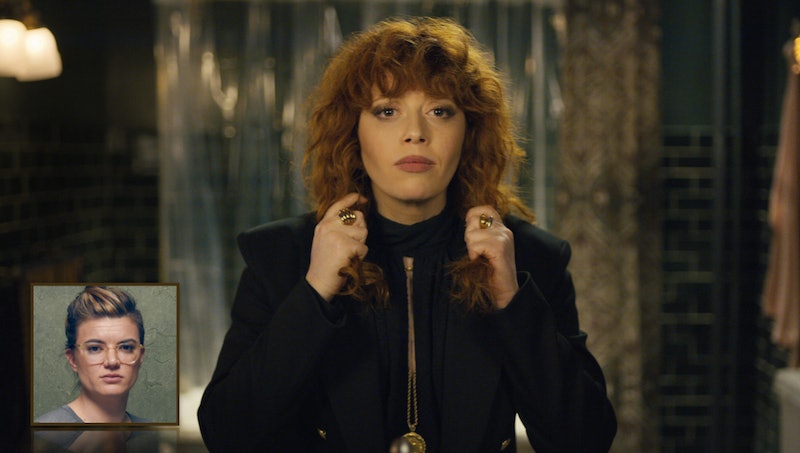 From the unapologetically debauched wedding-season comedy Bachelorette to the edgy, offbeat sex-addict rom-com Sleeping with Other People, Leslye Headland is known for a brand of comedy so sharp yet affable, you barely stop to realize how quietly innovative it is. The writer-director has found ways to inject more traditional concepts (the girls trip) and genres (the rom-com) with an authenticity rarely seen in those kinds of projects and create situations that, even at their most outrageous, are grounded by relatable — if not always likable — characters. But in Headland's latest project, the Netflix series Russian Doll, the comedic innovation is not happening quite as quietly. In fact, it's about as subtle as being hit by a cab, or tumbling down a flight of stairs, or tripping and falling through a sidewalk cellar door and breaking your neck.

It's not exactly a spoiler to say that these are all things that happen to Nadia (played by Natasha Lyonne, oozing a specific brand of brassy New York City charisma), a video game programmer who inexplicably keeps dying and re-living the night of her 36th birthday. The series follows her as she attempts to make sense of what's either a huge divine mistake, a psychotic break, or as another character posits, "purgatorial punishment for being a bad person." It's high-concept, to be sure, but Russian Doll is neither merely a flashy premise nor Groundhog Day (or Happy Death Day) redux — it's a story of a woman who's forced to finally interrogate the choices she's made, and discover what she wants out of life. And if you happen to get a kick out of Lyonne slowly unraveling while storming the streets of New York like she's the unofficial mayor of the Lower East Side, it's a comedy, too.

"What if there was a woman whose main issue is an existential crisis, like a true, ‘Do I exist? What am I doing here? What choices do I make if nothing matters?’"

After exploring the nature of relationships and friendship within the more relatable confines of a bachelorette party on Bachelorette and a group of friends in New York in Sleeping with Other People, Headland says that she and her Russian Doll co-creators Lyonne and Amy Poehler were hungry to tell a story that hasn't been told before, one that wasn't about a female protagonist struggling with her career or her romantic life.

"Like, what if there was a woman whose main issue is an existential crisis, like a true, ‘Do I exist? What am I doing here? What choices do I make if nothing matters?’" Headland tells Bustle. "Basically, a woman that’s at a spiritual crossroads as opposed to an emotional or material one."

It might sound heady, but Russian Doll is grounded by Nadia's haplessness in the face of her impossible situation, one in which the average person would be equally as perplexed and exasperated. But the show also isn't afraid to engage with the existential consequences of Nadia being stuck in a hamster wheel of life and death. As a playwright who got her start with her Seven Deadly Sins cycle, in which she wrote a play about each sin (Bachelorette was adapted from Headland's play of the same name, which was written as a depiction of Gluttony) Headland was more than equipped to tackle those topics. But she's quick to point out that the show came out of a collective brainstorming process in which she and her co-creators thought long and hard about what they could create that would break out of the usual comedy mold, and the answer just happened to be something existential.

It's hard not to feel like Russian Doll is tapping into a larger cultural anxiety at a time when the political landscape has made many people and marginalized groups feel powerless. But any political comparisons here aren't overt, nor were they intentional, according to Headland. "What implications our behavior might have — existentially, spiritually, morally — that's coming more to the forefront for comedians now that we have someone who runs the country who’s making sh*tty jokes all the time," Headland says with a laugh. If anything, she says that fact only encouraged her to push Russian Doll's comedy as far away from the territory of "low-hanging fruit" as possible.

"You kind of do want to start pushing your audience towards bigger and more intense questions. It’s like, ‘What about how we all die, and we’re not sure what we’re going to do about it — what about that?’" Headland says. "Like why don’t we set our sights a little higher than we usually do with comedy writers?”

Russian Doll definitely gets bleak— or, in the words of Nadia, "Jesus f*cking Christ, that's dark" — but that darkness serves to shade in the moments in life that Nadia comes to realize are truly important. Headland says that Nadia's emotional arc is based off her journey to maturity as a 38-year-old woman whose patterns of self-destruction and egotism eventually culminated in a breakthrough.

"There’s this wakeup moment of like, 'Oh, there are other people,' like my actions and choices affect other people, and so now I have to start building these adult relationships, not just friendships or romances, but real relationships," she says. "Relationships where people need to rely on me, where I need to communicate with other people."

It's a personal realization writ large, in the form of a well-paced, eight-episode Netflix marathon. And who knows, perhaps watching Russian Doll just might prompt the emotional shakeup you need.

More like this
Here’s What Happens To Bill & Frank In 'The Last Of Us' Video Game
By Brad Witter
'That '90s Show' Is Officially Coming Back For Season 2
By Gretchen Smail and Grace Wehniainen
The Plane Crash In 'Dear Edward' Is Based On A 2010 Tragedy
By Grace Wehniainen
Keyla Monterroso Mejia Is Finally The Star Of The Show
By Gabrielle Bondi
Get Even More From Bustle — Sign Up For The Newsletter
From hair trends to relationship advice, our daily newsletter has everything you need to sound like a person who’s on TikTok, even if you aren’t.