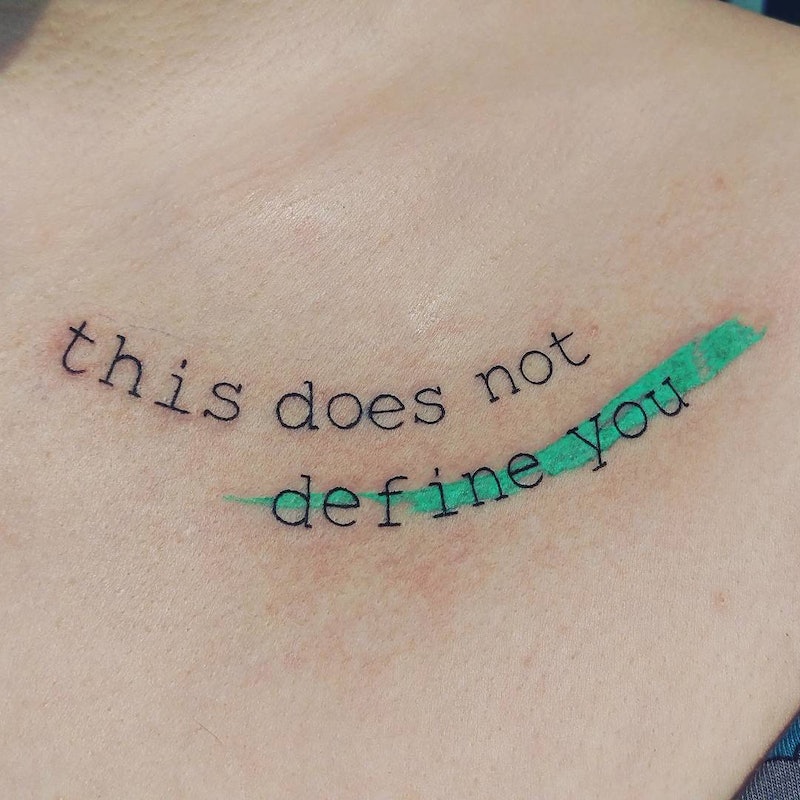 My only tattoo, to date, is an ampersand tucked behind my right ear. When I got it, I was the thinnest I have ever been. Until that point, I had been telling myself that once I was thin enough, I would stop starving — but then, I passed the too-thin weight that I considered thin enough, and I couldn't stop. I wondered when I sat down in the tattoo shop chair whether I would faint. It is maybe not advisable to get tattooed when you are prone to the drastic drops in blood pressure of the half-starved. I didn’t care. I couldn’t control my eating disorder, and I needed a reminder that there were things about my body I could control. Once it was finished, I felt more like myself. I wore my hair up more because I looked like myself with my hair up and my new tattoo visible.

This idea, that tattoos can serve as a vessel for control and reclamation is not unique to me — nor is it unique to those living with eating disorders. It can also be a powerful tool for victims of sexual assault, trans and nonbinary folks, and anyone else struggling with the feeling of losing control of their bodies.

Professor Margot Mifflin, a journalism professor and the author of Bodies of Subversion: A Secret History of Women and Tattoo explains that, tattooing can be a way to resist expectations about what bodies — particularly female, trans, and nonbinary bodies — are supposed to be. She explains that tattooing can represent "the refusal of sort of commercial forms of femininity," in favor of "expressing a greater sense of freedom to do what they want with their own bodies."

At the same time, tattooing is beginning to have broader appeal. In 2012, the number of tattooed women in the U.S. surpassed the number of tattooed men for the first time. Research suggests that women are drawn to tattooing, at least in part, because it can be an effective way to cope with trauma. Stigma against people with tattoos persists, but people with tattoos are also viewed as stronger and more independent than people without tattoos - and it seems that tattoos can also help people view themselves that way.

Jem Z., a disabled, queer artist and writer, and survivor of childhood trauma, describes tattooing as a way of “taking control of my body back from the abuser who hurt me.”

A friend of mine, Sam Lacovara, recently got the head of Medusa tattooed on the back of their right leg.

“I’ve been on testosterone for seven months now," Sam tells me, "And I’m just starting to find comfort in femininity and my experiences of ‘girlhood.’ This tattoo signified to me not only healing from sexual trauma and reclaiming my sexuality, but of embracing my femininity.”

Angie Ebba, a queer disabled femme performer and writer, says her tattoos “Tell a part of my story, only in a way that I want to tell it. I do that often in my writing and performance, but the tattoos are a way I can also permanently wear those retellings of story on my body. The tattoos don't say, ‘Look, I was hurt,’ or 'Look, I was raped," or 'Look, I have pain.’ Instead, they say, ‘I have hope. I am strong. I see beauty in and have grown from those things that were meant to be ugly and drag me down.’ They say ‘I'm bigger than my trauma and I have the power to tell my own stories.'"

Lillian Cohen-Moore, a 34-year old queer, mixed-race Jewish woman, had a leaf-and-vine design tattooed on her upper right leg on the one year anniversary of her attempted suicide after being raped.

“I could kind of be macho, but after that just between the pain and thinking about the day, I kind of like, cried a whole bunch," Cohen-Moore recalls. She describes her experience as both deeply emotional and profoundly healing: She hadn’t told her family about the rape she’d experienced shortly before her suicide attempt. She told them the day after she got her tattoo.

We all chose different tattoos, and we each have different personal histories that led us to tattooing. But, in getting tattooed, we all found a similar relief. It provided each of us with a way of taking back control of our bodies and our stories. In this, we are all connected to the women throughout history who have, through tattooing, insisted on looking like themselves, not someone else's idea of who they should be.

Professor Mifflin describes this to me as a kind of feminist praxis.

“Tattooing is most often an expression of [...] feminist freedom, in the sense that it’s about choosing to do what you want with your own body,” she says. Professor Mifflin sees this as a way of literally rewriting the story your body tells. She describes a woman she interviewed for her book, who was "the victim of sexual abuse as a child, and so she covered a lot of her body with tattoos, again as a way of reclaiming the body and rewriting the body and making it hers again after this abuse."

In a paper about tattoos and identity, Kristin M. Langellier spoke to Rhea, a woman who tattooed over her mastectomy scars. Langellier explains that Rhea's choice to tattoo over the scars was an exercise in "active agency," an autonomous choice at a time when Rhea's life and body felt out of her control. Langellier writes that getting a tattoo allowed Rhea to "transform the meanings of her [...] body for herself."

And while tattoos can represent autonomy and strength, you are rarely in the process alone. Each time you get a tattoo, you place implicit trust in the tattoo artist — and people getting tattoos in response to trauma are trusting the tattoo artist not just with the tattoo machine or needle, but also with the emotional baggage they are bringing into the shop.

Tea Leigh, a nonbinary and queer tattooist who co-founded the tattoo shop Welcome Home, says that clients, including those who have been victims of sexual assault, often come in without understanding what's drawing them to get tattooed.

"You’re already in a very vulnerable space, you know, I’m permanently altering your body, and so you choose to have like, this significant trust in your tattooer whoever that is, and I think because of that and my ability to kind of poke and prod and ask questions a little bit, I just get to the bottom of whatever it is," they say. They explain that clients "They come in, and without really understanding that’s why they’re getting this tattoo, sometimes — it’s not every client, but sometimes — towards the end of the session they get to the root of like, oh, wow, I’m actually getting this tattoo as a symbol to myself to give myself autonomy.”

Leigh explains that clients are often able to arrive at this understanding through conversation.

"You’re already in a very vulnerable space, you know, I’m permanently altering your body, and so you choose to have like, this significant trust in your tattooer whoever that is, and I think because of that and my ability to kind of poke and prod and ask questions a little bit, I just get to the bottom of whatever it is. . . . I just think it makes sense to think about something painful when you’re in pain, instinctually maybe, and I think that that enables our clients to just really open up."

Leigh works hard to ensure that their studio is a space where their clients will feel safe, facilitating a “really intimate, radical experience for people where they can radically alter their bodies." For Leigh, seeing clients through this process is powerful in and of itself.

“I had this really powerful experience tattooing a friend," Leigh recalls. "I was tattooing their ribs, which is a naturally painful spot, and they were talking to me about what the tattoo was about, and it was about something pretty painful, and I just realized that in that moment there was this intersection of magic through mental and physical pain.”

This intersection is one with which Sam is intimately familiar. They tell me that their Medusa tattoo "was particularly painful because of the size and location, which actually made it even more cathartic and satisfying to endure," Sam says. "By the end of it I felt like fucking warrior, a true survivor. Instead of hiding from the ways my trauma has impacted me, I can acknowledge and appreciate the ways I’ve moved through it all and still managed to find compassion and joy. To go through that pain and come out on the other side with something beautiful to show for it felt like the best way imaginable to commemorate everything I’ve survived and all of the healing and recovery I’ve done."

Jem finds comfort in zir tattoos. Ze tells me "I'm glad for every one of my tattoos. There are small things here or there that I would change — I wish I chose a different orientation, or picked a different font, or knew why one word is bolder than the rest — but none of them make me want a cover-up." Ze adds, "Whenever the bad feelings come back, I often put my hand over the tattoo most relevant to what is hurting me."

Ebba plans to get more tattoos to continue her journey to reclaim her body.

"[I'm getting a] skeleton mermaid tattoo,” she says, as a symbol of "medical trauma and physical pain. I have several chronic health issues that cause severe pain and the inflammation (and eventual fusing) of certain parts of my body. The flowers will be growing from the parts on the skeleton where my pain is the worst. It is to symbolize beauty from pain, light from the shadow. The process is healing in that it is a pain that I was choosing for myself, which created a piece of artwork on my body.”

I would love to say that I began eating again after I got my tattoo, but I didn't. Recovery is a process, and for me, the process didn't start in earnest until a year or so after I got my tattoo. But recovering from my eating disorder required me to trust myself more than I ever have; my tattoo was a reminder that trusting myself is something I know how to do.

It is hard to be vulnerable, and harder still to trust when your trust has been violated before — by yourself, or someone else, or time, or sickness, or society. Part of the healing power some have found in tattooing might be in its demand that you trust someone with yourself. Sometimes, it is hard even to trust yourself again, to be soft and vulnerable with yourself after trauma. Tattooing can help with this too. You can learn to trust your choices, and you remind yourself that your body is your own.

More like this
Danessa Myricks Does It All
By Parizaad Khan Sethi
15 Hibiscus Tattoos That Bring Tropical Vibes To Your Body Art
By Paris Giles
Fermented Skin Care's Barrier-Boosting Benefits, Explained By Derms
By Audrey Noble
Everything You Need To Know About Ephemeral Tattoos
By El Hunt
Get Even More From Bustle — Sign Up For The Newsletter