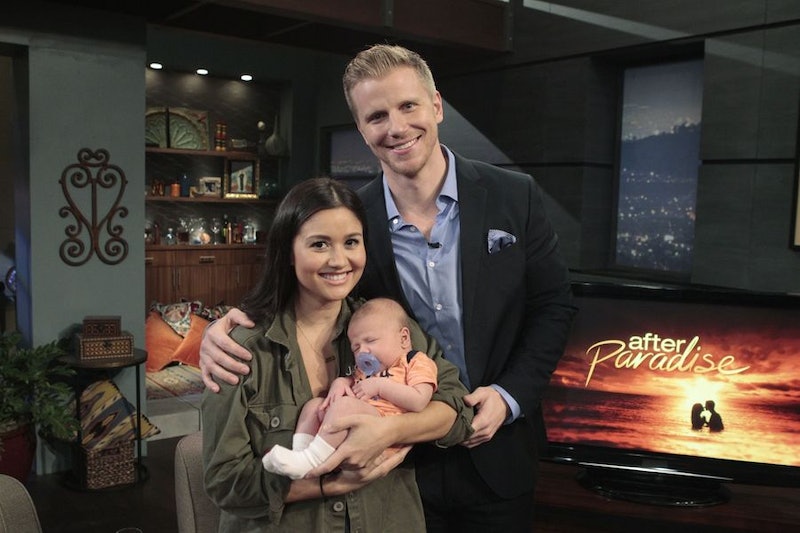 Honestly, can you think of a better person to launch a dating program than a former Bachelor star? Who better knows the ins and outs of non-traditional dating methods than someone who has simultaneously dated 25+ women on television? If you agree, you're in luck, because former Bachelor Sean Lowe has launched a dating app, Vouch, with three of his friends, Kevin Tinkle, Bobby Simpson, and Austin Eudaly. Recently Lowe joined in on a special mini episode of Bustle's Bachelor podcast, and he spilled all the deets about how the idea of setting friends up made the dating app come to life.

In case you forgot, Lowe and his now-wife Catherine met and fell in love during his season of The Bachelor. But, that happened back in 2012, before the craze of Tinder and the like really exploded. And, though Lowe is obviously happy with his life and his wife, he says he's sad he missed out on "the joyous experience of swiping right or doing any of these other things you do on dating apps." (It's really not that fun when you are actually using it to try to find love, I have to say.)

So, Lowe and his friends decided to turn the whole idea on its head by taking the process out of the dater's hands and placing it into the hands of people he or she knows and trusts — basically giving him and Catherine and other non-singletons a way to still use a dating app and get in on that so-called "joyous experience" by helping their friends. So, it's not only fun for the people actually finding love, but for the family, coupled-up friends, and married people in your life.

According to the app's press release, this is how Vouch works:

You nominate the people closest to you to become your "Vouchers" who will connect you with other singles just like they would in real life. Once two of your Vouchers agree, you’ve made a match and have the choice to take the conversation from there ... In addition to swiping, Vouchers can also help single friends build their profile and "vouch" for them, providing a more rounded perspective to potential matches.

So now all of Lowe's single, but totally-dateable friends struggling to meet people on their own have somewhere to turn. And, it sounds like it has the potential to sift out the people who would be totally wrong for you, because hopefully your friends and family know you better (maybe even than you know yourself) and won't vouch for anyone terrifying or incompatible.

If you think Vouch sounds like an exciting change in pace from the regular "swipe right, swipe left" dating apps that seem to be flooding the market, you can check it out for yourself now in the app store.

More like this
Bachelor Nation's Blake Horstmann Is Dating 'Love Is Blind' Star Giannina Gibelli
By Jake Viswanath and Radhika Menon
‘The Bachelorette’s Michelle Young & Nayte Olukoya Explained Their Breakup
By Stephanie Topacio Long
Only 3 Of The One That Got Away Couples Seem To Still Be Together
By Brad Witter
The 'Love Island' Contestants *Do* Know Who Gemma's Dad Is, After All
By Bustle UK
Get Even More From Bustle — Sign Up For The Newsletter