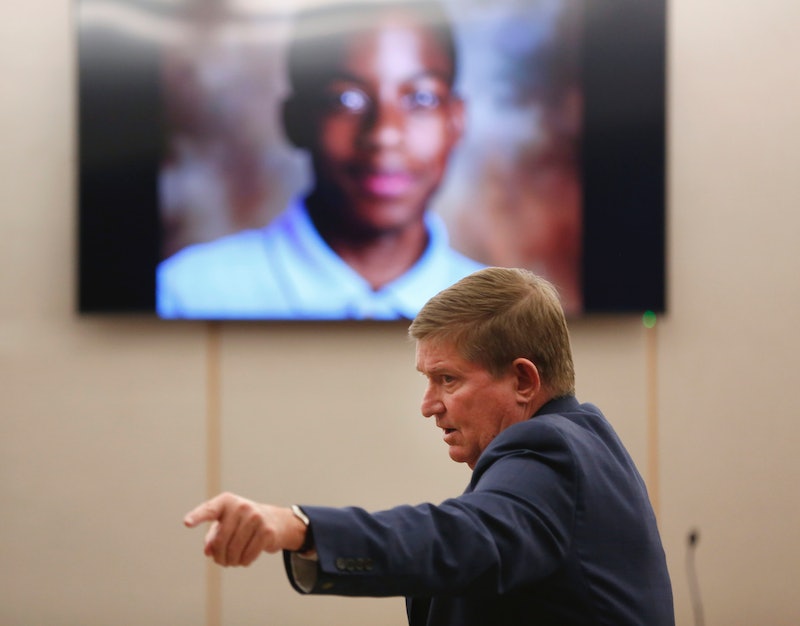 On Tuesday, a jury found a former Texas police officer guilty of murdering a black teenager, Jordan Edwards. The ex-cop, Roy Oliver, shot the teenager in April 2017 and was fired from from the Balch Springs Police Department several days later.

The teenager was 15 years old when Oliver, who is white, killed him. He was riding in the passenger seat of a car with four other black teenagers when Oliver shot at the moving vehicle. The group was leaving a house party, AP reports, and the victim was unarmed.

Last week, the former officer told jurors that he shot at the car because he believed it was moving toward his partner. He contended that a vehicle can be considered a deadly weapon, though his partner testified that he at no point felt that his life was in danger, according to AP.

The child's father, Odell Edwards, told reporters that he was "thankful" for the verdict, and that he wanted to "jump up and down," according to NBC. "I'm happy, very happy. It's been a long time, a hard year," he said.

Police were at the house party because they had reportedly been dispatched to an underage drinking call. Oliver said that he heard gunshots while at the house, and per NBC, he said he believed there was a shooter outside. It turned out that unrelated gun shots had been fired at a nursing home nearby, AP reports.

According to multiple reports, Jordan Edwards's family, friends, and supporters burst into relieved exclamations after the jury delivered its verdict. Some cried and hugged each other.

Oliver faces up to 99 years in prison, according to KTVT, a Texas-based CBS station.

Although Oliver testified that he shot at the car because he believed his partner was in danger, two teenagers who were at the party told the court that they saw what happened and didn't agree with the former police officer's version of the story. One told jurors that the car wasn't facing a police officer when Oliver opened fire. Prosecution further argued, according to another AP report, that Oliver fired his gun five times after the car in question had already passed his partner.

Oliver's trial lasted eight days, and included footage from body cameras, according to The Texas Tribune. The jury reportedly deliberated for more than 13 hours before coming to a decision. Notably, Oliver was found not guilty on two lesser charges of aggravated assault.

It is historically very rare for a white police officer to be convicted of killing unarmed black men, teenagers or otherwise. Tuesday's decision, by far, represents a departure from the norm.