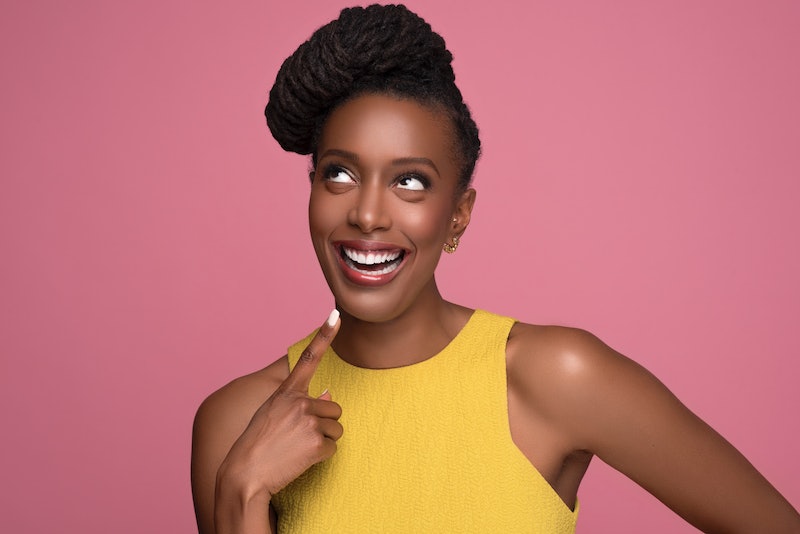 Photo of Franchesca Ramsey, courtesy of Joey Rosado
By Kerri Jarema
May 17, 2018

If you've been around the internet long enough, you've probably heard of Franchesca Ramsey. The social media mainstay and "accidental activist" has graced screens of all sizes since at least 2011, when her YouTube video "Sh*t White Girls Say To Black Girls" went viral. Since then, Ramsey has not only continued to make influential YouTube videos, but she has become a major voice in online activism. But the truth is that Ramsey didn't set out to be either a comedian or an activist — and she's definitely made some mistakes along the way. And now, in her first book Well, That Escalated Quickly, on shelves May 22, Ramsey wants to help all of us avoid the same social media pitfalls in our quests to reclaim our internet space.

After her video went viral to the tune of 12 million views, Ramsey was suddenly faced with an avalanche of media requests, fan letters, and hate mail. And she had two choices: Jump in and make her voice heard or step back and let others frame the conversation. After a crash course in social justice and more than a few foot-in-mouth moments, she realized she had a unique talent and passion for breaking down injustice in America in ways that could make people listen and engage. So she took up her pen and used her own experiences as an accidental internet influencer to explore the many ways we communicate with each other — from the highs of bridging gaps and making connections to the many pitfalls that accompany talking about race, power, sexuality, and gender in an unpredictable public space like the internet.

"This book is an attempt to show you that mistakes are invevitable, and that what's actually important is how we use them to make a better world. For all the hate and abuse I get from all points on the political spectrum, I've been fortunate that many people have been compassionate about showing me where I messed up and helping me get back on track. I wanted to pay the generosity forward somehow, and I'm doing it the best way I can: by pulling my own receipts and dragging my former self."

Basically, Ramsey has put together a book that will give you all the tools you need to begin making the most of your online experience in this new age of social media: one in which being "woke" is paramount, but even the most socially conscious person can get caught up in a negative conversations or situations. Chapters range from a super practical guide to when and why to unfollow people on social media — talk about a universally #relatable problem, am I right? — to finding that ever-elusive balance between pointing out problematic behavior without becoming a "callout queen." And all of it is offered without judgement, and with witty writing and hilarious tales of missteps and mistakes.

But more than just a general guide to not being awful on the internet, Ramsey's book is must-read for anyone who wants to dive into online activism, but isn't quite sure how to do it effectively.

"Ultimately, being an activist is going to require way more time and discomfort than it takes to change your Twitter profile pic to a rainbow or put a safety pin on your backpack. These can be great signs of solidarity and support — well, maybe not the safety pin — but they're the bare minimum. You have to take the next steps to getting out of your comfort zone and and commit to continuously working to be a better person and, in turn, making the world a better place...What does this mean, exactly? It's different for everyone."

And by reading Well, That Escalated Quickly, you'll fnd out what it means for you — whether it means finally giving up your obsession with that problematic TV show or figuring out the right way to reach out to your anti-feminist uncle on Facebook. Because, as Ramsey writes, "While it's as important as ever to to hold each them accountable, we also have to remember that everyone's journey is different and takes time. If we want to figure out how to solve this, we have to do it together." And the first step should definitely be reading this illuminating, entertaining book.

More like this
The Viral 'Little Miss' Franchise Is Focusing On Mental Health Next
By Darshita Goyal
We’ve All Had Bad Sex. Nona Willis Aronowitz Is Talking About It.
By Sophia Benoit
On TikTok, #SeñoraEra Shows Latinx Users Becoming Their Mothers
By Natalia Perez-Gonzalez
Allie Bennett's “Treadmill Strut” Started A Walking Movement On TikTok
By Sophia Moore
Get Even More From Bustle — Sign Up For The Newsletter