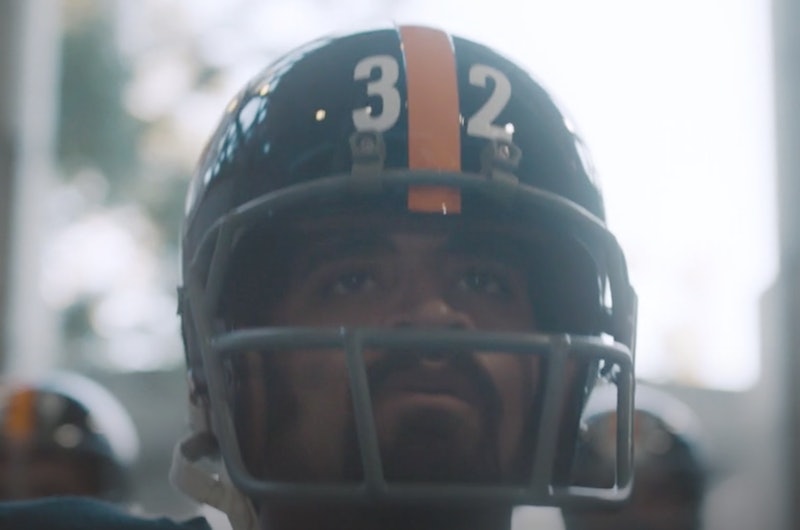 The Season 3 premiere of This Is Us deviated from tradition for a bit by focusing on a character we'd never met before: Steelers player Franco Harris. But nothing is ever random on this show, so you just know that Franco Harris' connection to This Is Us is bigger than just that he's part of one of the greatest Steelers moments in history. There are already several theories as to what Harris' role really means for the show.

To start, Harris is a real person and he really did make that amazing play to win the Steelers the game. According to the NFL's website, in 1972 the Steelers were losing their divisional playoff game 7-6 to the Raiders. In the final minutes of the game, Terry Bradshaw threw a pass that was deflected away from his target, but ended up in Harris' hands. Harris ran it 60 yards for the game-winning touchdown. The remarkable play is fondly called the Immaculate Reception and really would have been that big a deal to Pittsburgh that everyone would have been talking about it like Jack was with strangers all evening.

According to Yahoo Sports, though, it's worth noting that Jack actually couldn't have watched that game on TV. Back then, home games were blacked out from local viewers — probably in an effort to get them to actually go to the stadium to watch. In 1973, the rules were changed to allow broadcast of home games where the stadium had sold out, per Yahoo.

So, that detail aside, what does this all have to do with This Is Us? Fans have some seriously compelling theories.

He's A Metaphor For Jack And Rebecca

In the final scene of the Season 3 premiere, Jack is all excited to go see Rebecca again, but he's disappointed to see that another man has beaten him to her door. Meanwhile, the voiceover on the radio Jack's listening to is recounting the Harris reception. The sports announcer says, "A reminder for all of us, I think, that sometimes the ball has to bounce off one person a few times to wind up in the hands of the right guy and make a story truly immortal."

Fans of the show all know that Jack and Rebecca do end up together, so clearly the show is just telling us to be patient and that soon Jack will be in the right place at the right time just like Harris was. But since that's a pretty straightforward theory about Harris, and This Is Us is known for twists, fans have cooked up some other more complicated ideas as well.

Harris Is Related To Deja

Fans got to meet Deja's father in the Season 3 premiere when she told him that he was going to miss out on her life since she was going to allow herself to be adopted by Randall. It seemed like she was closing the door on that chapter of her life for good, but some fans think that Deja's biological family story isn't over. Perhaps Harris is related to Deja in some way?

Harris Is Related To Zoe

Zoe, Beth's cousin, is basically like her sister since the two of them grew up together after Zoe's biological mom was unable to care for her. She has a pretty prominent role this season since she's dating Kevin and is back in Beth's life in a meaningful way.

Co-showrunner Elizabeth Berger also told The Hollywood Reporter that "we can expect to see [Zoe] for a while." Perhaps during her stint on the show we'll also learn more about her family, which could have ties to Harris.

Harris Is Related To Beth

My own personal theory is that Beth is somehow related to Harris. According to Deadline, Dan Fogelman has teased that Season 3 will explore Beth's story more. "[Beth] will get a deep-dive where we learn about her backstory; she’ll get a showcase," he said.

Now, because Harris is a real person who is still alive, it would be a little odd to have him feature so heavily in the show. Instead, I think Beth's mom may be Harris' sister. In the show, she's seen telling her mother that she's going out with someone named Michael, and her mother replies, "Don't get pregnant." What if she did and what if that kid is Beth?

Of course, that would make Beth 46 years old to Randall's 38 years old, so maybe it was just foreshadowing that eventually Harris' sister gets pregnant with Beth? I don't think Harris is a father or a grandfather of anyone on the show, but I'm not ruling him out as a potential relation. Such a reveal would bring Beth a little closer to the Pearsons, because you know Jack would have gotten such a kick out of Randall marrying Harris' family member. In any case, don't rule out Harris' role as a one-time thing. This show is known for surprises — just like Harris was during his Immaculate Reception.