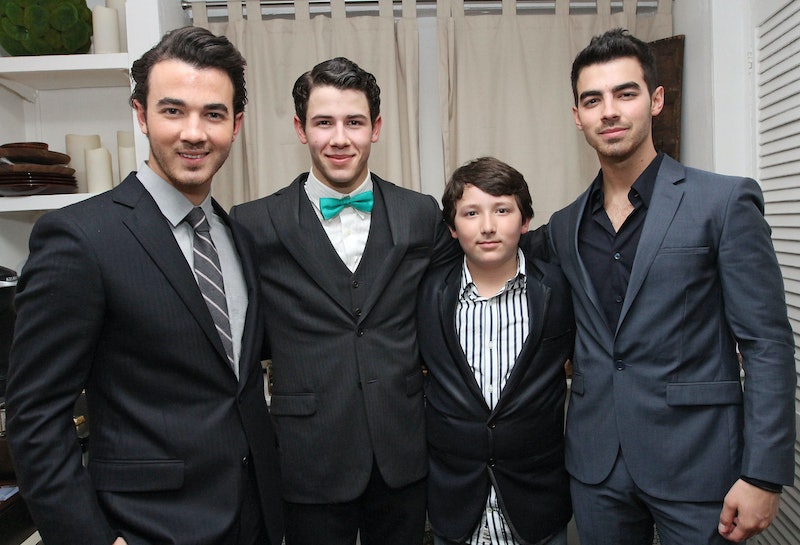 Remember the fourth and youngest Jonas brother? AKA the little guy who tagged along with Kevin, Joe, and Nick on Jonas in hopes of getting in on all their boy band action? Well Frankie Jonas is officially an adult now and suddenly Disney Channel audiences have never felt more ancient.

On Friday, Sept. 28, Frankie Jonas celebrated his 18th birthday which means he is legally no longer the the youngest Jonas kid. He's now a man. While his famous family members wished him a happy birthday on their respective social media pages, it seems none of them want the world to know Frankie is now a certifiable adult because most of them (including Joe and Kevin Jonas) posted photos of Frankie as the young kid fans still remember him as.

His older bro Joe Jonas posted a photo of young Frankie giving the finger to the camera. In the post, he wrote that Frankie is a "legend," saying, "Here is the one and only Frankie flipping off the camera in front of the batmobile age 6 I can’t think of anything cooler." Kevin posted the same photo, calling his younger brother "the man the myth the legend!" The family must really like that photo. (It's even Frankie's Twitter avatar.) Even Papa Jonas posted a collage of Frankie in his younger years. He wrote, "Some wonderful memories of my @franklinjonas when he was a boy. Now a man of 18. So proud."

However, Nick Jonas posted a more current photo of Frankie (who's on the left):

Although Frankie's remained out of the spotlight, it seems he's still super tight with his older brothers. Just a few days before his 18th birthday, Frankie posted a photo with himself and Nick at the 2018 Ryder Cup. He also took to his own Instagram to wish Nick a happy birthday in September, writing, "happy birthday bro, you have and always will be one of my biggest inspirations and supporters." On Joe's birthday in August, Frankie called his brother "the littest, most chillest, most illest brother a guy could ask for." Frankie also gave Joe and Sophie Turner a congratulatory engagement postlast year, writing, "love you both with all my heart, so glad we got to celebrate the beautiful journey y’all are embarking on."

By the looks of his Instagram, it seems like Frankie is keeping up the family's musical legacy. He recently posted two consecutive photos of guitars as well as a more recent shot of himself and Nick while he's playing the guitar. Let's face it, he's probably out there breaking hearts on the reg.

And to think just yesterday he was that pesky little brother on Jonas always hanging around...

Time flies when famous celebrity kids get old out of nowhere. Maybe Frankie will join Nick or Joe on stage soon and really blow fans' minds.