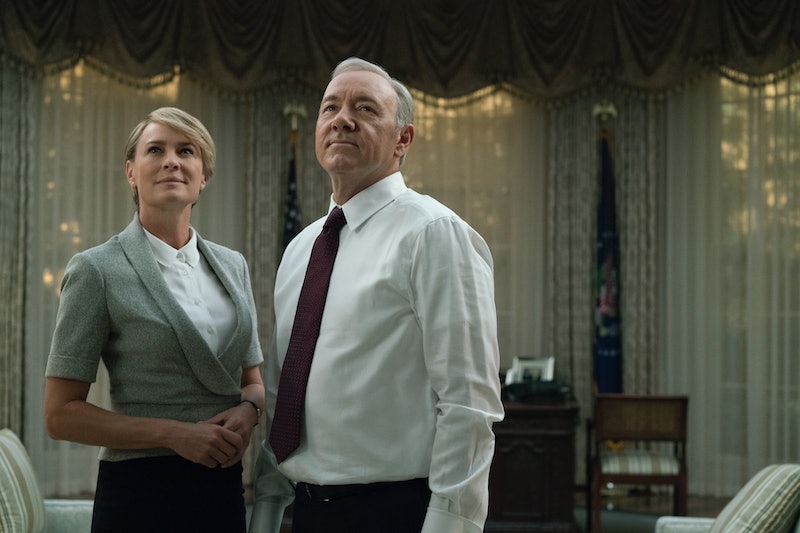 There are SPOILERS ahead for House of Cards Season 5 through Episode 9. After a long and complex presidential election, Frank and Claire Underwood manipulate their way into being elected president and VP, respectively. As they are being sworn-in at the inauguration, the fourth wall breaks. And Frank delivers a chilling speech that is frighteningly relevant to the real 2016 presidential election and our current divided political landscape. He often makes asides to the audience, but this time, it felt like the president was speaking to viewers on a very different level. "You made this bed, America," Frank tells the camera. "You voted for me."

In Season 5, the Underwoods face off with Republican opponent Will Conway in a close election that seemed to give the edge to the political wunderkind and veteran. Frank even calls to concede the race to Conway. Yet, that's all revealed to be a part of the Underwoods' scheme to use terrorism and fear to discredit the election results and invoke the 12th Amendment, in which Congress votes on president and VP. Ultimately, Conway loses his support after several hot mic recordings go public, even though half the country voted for him.

In Frank's speech, he takes the viewer through the journey of his ruthlessness and cautions you to really think about who you put your political support behind. House of Cards has followed Frank and Claire's manipulations and political schemes for five seasons as they ascended to the White House, so the viewer is well-aware that the duo has their secrets — and it makes for an entertaining fictional TV show. But Frank's speech directed at the viewing audience emphasizes that being President Of The United States is not a joke, and that you really have to carefully consider who you want to hold the immense power of the Oval Office. This message holds particular weight, since Donald Trump was elected president last year — as a businessman and former reality TV star who has not held political office until now.

The full transcript of Frank's remarks are below.

"Yes, here we go again. Secretary of State, that's all I wanted. That's all I wanted. That's what I was promised. And now, here I am, President of these United States. You made this bed, America. You voted for me. Are you confused? Are you afraid? Because what you thought you wanted is now here. And there you are, staring back, slack-jawed, bewildered, wondering if this is what you actually asked for. This democracy, your democracy, elected me. And if you think it was hard getting here, you're beginning to understand what I'm willing to do to stay. I look across at this crowd gathered today and I know these are not my supporters. I'm looking at people who are waiting, with a smile on their face, for their turn. And the most vicious among them are the ones smiling and clapping the hardest. Power is a lot like real estate. Remember?"

You might think that real estate line might be a reference to Trump, who has many real estate holdings. Alas, it's actually a callback to a statement made by Frank in Season 1: "Power is a lot like real estate. It's all about location, location, location. The closer you are to the source, the higher your property value."

Regardless, it's a chilling House of Cards speech to hear in 2017, when many voters who supported Trump are expressing regret for the choice they made.