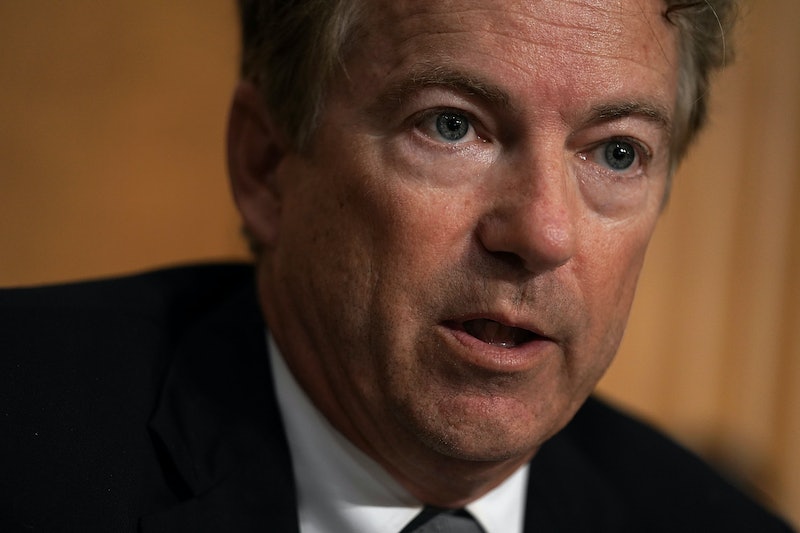 Sen. Rand Paul took to the Kentucky airwaves on Tuesday to warn about the political climate and the potential for violence. "I really worry that someone is going to be killed," Paul told a local radio station, prompting an outcry from some on Twitter including the father of a Parkland shooting victim. Fred Guttenberg's response to Rand Paul challenged Republican policies — and "inflammatory rhetoric" — by pointing out they've already lead to deaths.

Paul was speaking to the hightened tension surrounding the confirmation of Supreme Court Justice Brett Kavnaugh and warned of an assassination. "I really worry that someone is going to be killed and that those who are ratcheting up the conversation ... they have to realize that they bear some responsibility if this elevates to violence," Paul told the radio station.

The story, covered by The Hill, was posted to Twitter. That's where Guttenberg responded, retweeting the story and writing this response:

Worried? My daughter was already killed because of the lack of inaction by you and your senate. Using inflammatory rhetoric like that which is used by you, Trump, and McConnell does not help. I hope you are wrong but yes, people are already dying because of your policies.

Guttenberg's daughter Jaime was killed at the school shooting in Parkland, Florida, with 16 others in February. Following the shooting, student activists from Marjory Stoneman Douglas pushed for political action in D.C. with the March for Our Lives, but no gun control laws have passed the Republican Congress. Trump has pushed for arming teachers.

Paul referenced the shooting at a D.C. baseball practice that injured House Majority Whip Steve Scalise and when his own neighbor attacked him and broke some of the senator's ribs. "These are people that are unstable. We don't want to encourage them,” Paul said. "We have to somehow ratchet it down and say we're not encouraging them that violence is ever OK."

In response, Guttenberg was not the only person to point out gun violence as the weak spot in Paul's argument. "26,971 people have died because of gun violence since Jan 1, 2017," consultancy executive Tanya Tarr wrote on Twitter. "Yes, Rand Paul. People are getting killed."

That was not the only response to the Paul quote. "Going to be?" HuffPost reporter Jennifer Bendery wrote on Twitter. "Heather Heyer." Several others also pointed out that Heather Heyer died from the political climate on the right. Trump made his "both sides" argument after her death instead of calling out neo-Nazis.

Paul's main fight over discourse has been waged with Sen. Cory Booker. "I think what people need to realize, that when people like Cory Booker say ‘get up in their face,’ he may think that that's OK," Paul said. "But what he doesn't realize is that for about every thousandth person that might want to get up in your face, one of them is going to be unstable enough to commit violence."

Kelley Paul, Paul's wife, even wrote an op-ed about it, asking Booker to "condemn violence." That led Booker's people to respond, with his supporters saying that Booker has said in the past that he urges people protest in line with the ways of Martin Luther King, Jr., "who always did it by recognizing the dignity of even those who you oppose."

Guttenberg didn't get into that argument. Instead, he said that inaction can be dangerous too.