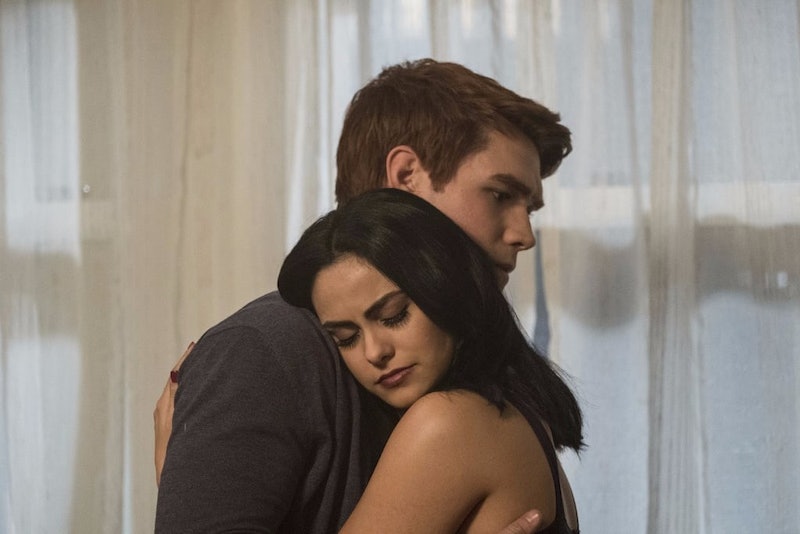 When Riverdale returns next month for Season 4, it will begin by paying tribute to the late Luke Perry, who played Fred Andrews. Now, thanks to creator and showrunner Roberto Aguirre-Sacasa, fans can read a page of the premiere's script, which teases how Archie's dad's death on Riverdale will change his relationship with Veronica. And really, how could it not?

On Thursday (Sept. 12), Aguirre-Sacasa shared a scene from the episode, titled "In Memoriam," with Entertainment Weekly. In it, Archie (KJ Apa), Veronica (Camila Mendes), Betty (Lili Reinhart), and Jughead (Cole Sprouse) are sitting in a booth at Pop's Chock'Lit Shoppe on July 3 discussing their summer plans, which may or may not include camping.

Over pancakes, the foursome joke about being attacked by bears and veto Veronica's suggestion to go back to her parent's place at Shadow Lake. "The last time we were there those hillbillies almost killed us," Jughead reminds her. Before they can decide how they'll spend their last summer vacation before college, Archie's phone rings. It's his dad. The scene ends with Archie taking the call and asking, "Hey dad, what's up?"

"The scene ends with the phone call that changes Archie's life forever," Aguirre-Sacasa wrote in the script's annotations. Riverdale's first episode of Season 4 will look at the "immediate aftermath of what happened to Fred," Aguirre-Sacasa. told EW, which has not been revealed as of yet. Right now, fans don't even know if it will be Fred on the other side of that phone call. The season will also look at how Archie deals with his loss "and his friends being there for him and helping him through it,” according to the creator.

Specifically, this season will look at how Fred's passing test's Varchie's relationship. When it comes to how her character reacts to the tragedy, Mendes told EW, “Veronica’s kind of prepared. She had to step up in the beginning of Season 3 and be this girlfriend she didn’t know how to be that was very supportive and kind of a rock. She’s older now and she’s more experienced, and she’s ready to help Archie through this tragic time in his life.”

While many have already guessed that this episode will be an utter cry fest, Aguirre-Sacasa confirmed as much to EW. At the table read for the episode, which took place five months after Perry died of a stroke, one cast member after another just lost it.

"We were all crying," told Aguirre-Sacasa. "At a certain point, KJ started, then Cami started, and I started, and we just didn’t stop. I’m really, really proud of the way everyone came together in terms of honoring the memory of Luke and honoring the character of [Archie’s dad,] Fred.”

Already, Riverdale has teased Season 4 with a photo of the aftermath of Fred's death. In the emotional promo image, Aguirre-Sacasa posted on Twitter, Archie hugging his mom, played by Molly Ringwald, in tears.

The Season 4 premiere is definitely going to be a box of tissues kind of episode, but fans might want to stock up now if they're going to make it through the rest of the season.