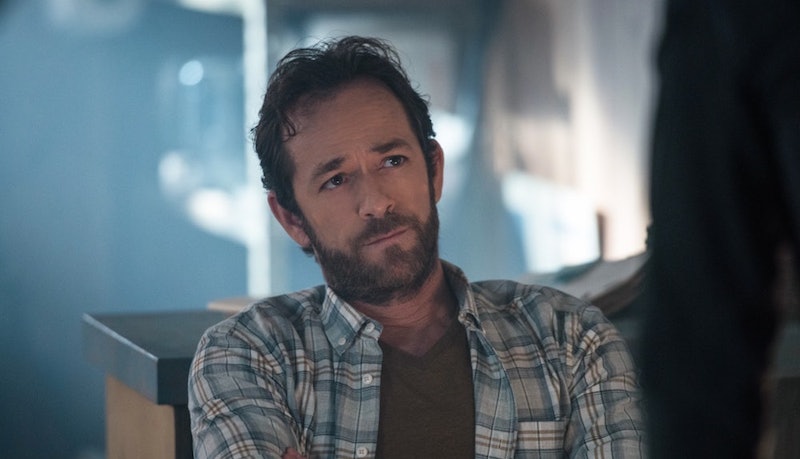 Riverdale’s return will be an emotional one. A new Riverdale Season 4 photo teases the aftermath of Fred Andrews’ death. On Sept. 3, showrunner Roberto Aguirre-Sacasa shared an emotional picture on social media of Riverdale’s mother-son duo Mary Andrews (Molly Ringwald) and Archie Andrews (AJ Kapa) as they embrace in a hug. Aguirre-Sacasa captioned the emotional Twitter post, “No words.” The Season 4 premiere episode, titled “Chapter Fifty-Eight: In Memoriam," will honor the late Luke Perry, who died in March from a stroke. He was 52.

Perry played patriarch Fred Andrews on the CW series for the first three seasons. On the heels of his death, Aguirre-Sacasa revealed that the Season 4 premiere would serve as a tribute to the late actor. “It's going to reveal the fate of Fred Andrews and it's set on July 4th. It's a really emotional episode; it's a tear-jerker,” he told Entertainment Tonight in a July 21 interview. “We had the table read for it about [two weeks] ago and I'm not going to lie, we were all crying.”

Aguirre-Sacasa added at the time, “But we think it, again, honors the memory of Luke [and] It honors the memory of Fred. They were both such amazing human beings that we wanted to really, really craft an emotional and deep tribute to him, which is what I hope this episode is.”

The emotional photo of Mary and Archie teases the larger role Mary Andrews will play in the forthcoming season. With the loss of the Andrews’ patriarch, Aguirre-Sacasa revealed back in July that Ringwald’s character would return to the series in a big way. At Riverdale’s San Diego Comic-Con panel, Aguirre-Sacasa teased the crowd of Mary’s return, “She’ll be Archie’s mom more or less full-time this season.”

More so, the showrunner tapped Perry’s Beverly Hills, 90210 co-star Shannen Doherty for the tribute episode — a cameo that Perry had “wanted to happen since Season 1,” according to Aguirre-Sacasa. “They were such good friends,” he told the crowd at Comic-Con. “When we were putting together this tribute episode, we wanted to make it as special as possible, and so we asked Shannen to do a pivotal, super-emotional role. She read the script and immediately said ‘yes.’ It’s very impactful."

On Instagram, Doherty confirmed her guest role in an emotional post. “I am deeply honored to pay tribute to Luke on Riverdale,” she captioned a photo of herself with Perry as their Beverly Hills, 90210 characters. “The care in which this show takes in honoring his memory is beautiful. He is missed. Today. Tomorrow. Forever.”

While details on just how the series will address Perry’s death have been sparse, Aguirre-Sacasa told reporters at the 2019 Television Critics Association summer press tour in August that it would be "very, very emotional" and “just beautiful.” He said at the time, "I think it's a real tribute to Luke. I think it's a real tribute to Fred. It's very cathartic to watch it and I think everyone really came together, specifically to tell this kind of story… It's a really simple. It's… just beautiful.”

Riverdale Season 4 returns to the CW on Wednesday, Oct. 9. Don't forget your boxes of tissues.