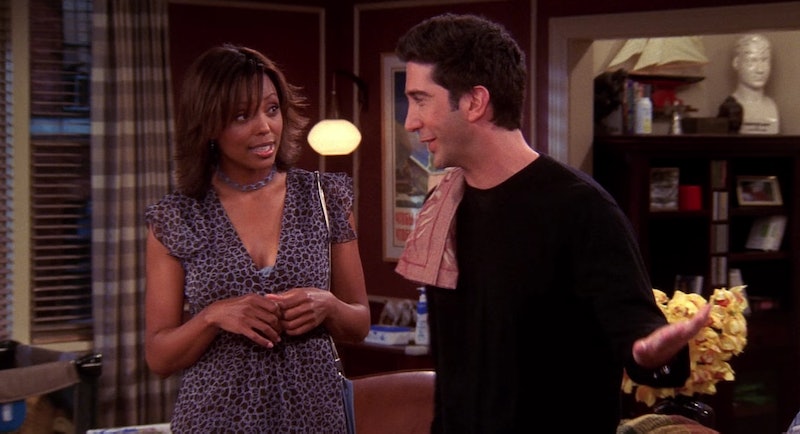 Over its 10 seasons, Friends saw a whole lot of kooky characters and hilarious guest stars. Some of the most memorable include Carol, Ross’ lesbian ex-wife, Richard, Monica’s older beau played by Tom Selleck in his prime, and Ross’ string of ex-girlfriends. Now, almost 15 years after the series finale aired, notable guest actors talked about their experiences on set with The Guardian. And Aisha Tyler revealed what it was like to guest star on Friends as a black woman.

Tyler appeared on Seasons 9 and 10 of Friends playing Dr. Charlie Wheeler, a paleontology professor who first dates Joey and later Ross. Speaking to The Guardian, she said, “It was a very intimidating set to walk into. I think the cast had had some pretty notable experiences with guest actors coming in and struggling because of the pressure of having to be funny on the Friends set.”

Tyler didn't just feel pressure to be funny, however. As one of the only major black characters in the entire series, Charlie had an added significance to fans. Appearing in nine episodes, Tyler was the only black woman to have a recurring role on the series throughout its entire run. "It was a pivotal moment for the show in regards to race," Tyler told InStyle in September of 2018, "in terms of having a character of color that had some durability, and stuck around a while, but what was interesting was that they didn't really make a meal of it."

In fact, Charlie's race was never a plot point, and, as Tyler recounted to The Guardian, the casting call was open to all ethnicities. “My character wasn’t written on the page to be a woman of color, and I auditioned against a lot of other women of different ethnic backgrounds, so I like to think they picked me because I was the right person for the role," Tyler said. She went on to say there was probably a little bit of tokenizing at work, but it was important nevertheless. "I knew it was something new for the show, and it was really important because, the fact of the matter was, it was a show set in Manhattan that was almost entirely Caucasian. It was an unrealistic representation of what the real world looked like," Tyler noted.

In recent years, the lack of diversity on Friends has become a popular topic of discussion, but Tyler was quick to note that this was always a glaring oversight, even back then. “People of color were always aware of it [the lack of diversity].,” Tyler said. “Even at the time, people were constantly pointing out that Friends wasn’t as diverse as the Manhattan of the real world.”

Still, she's happy to have been a part of such an iconic and beloved show. "There have been other shows that have advanced that concept of friends as chosen family, but Friends was just a perfect encapsulation of that idea," she said. Most people agree — the 1990s sitcom was the number one binge-watched show in 2018, according to TV Time, via Decider, and fans were distraught when they thought Friends was going to leave Netflix in December of 2018. Lucky for all of us, Friends has remained on the streaming site, which means fans can go back and revisit Tyler's charming guest arc whenever they please.