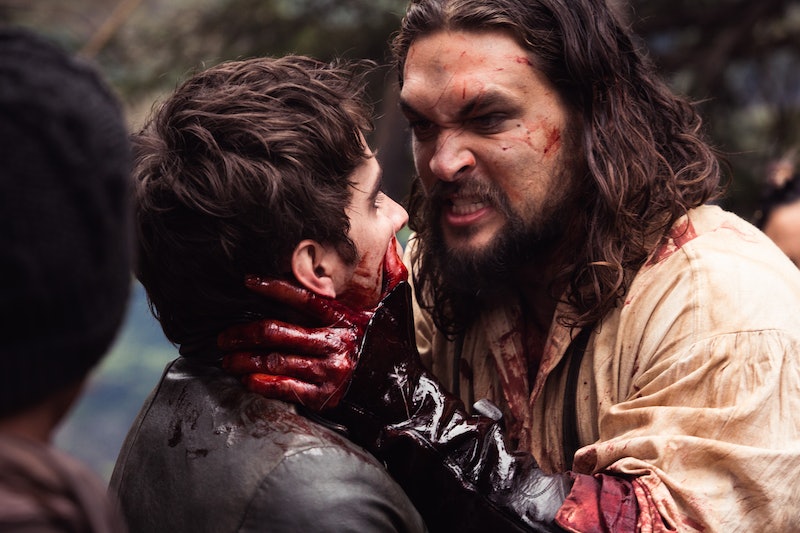 One of Netflix's newest series, the Canadian fur-trading historical drama Frontier, received so much confidence from the network that a second season was confirmed before the pilot had even aired. But despite the early vote in its favor, Frontier Season 2 spoilers are still pretty few and far between. The series was renewed back in late October 2016, and through the initial announcement from Netflix, The Hollywood Reporter was able to confirm some interesting tidbits about the second season. According to THR, Jason Momoa will be returning to Season 2 of Frontier as Declan Harp, and it's likely that there will be only six episodes, making the second season just as short as the first.

Fans will be happy to know, though, that since the show was greenlit for a second season so soon, the cast and crew are already hard at work at making Season 2 a reality. As of just a few short months ago, the gang was on set, filming new episodes. And although it's a bit early for them to be giving out spoilers, there are a few things that can be pieced together by the cast and crew's photos from the set of Frontier Season 2, and these hints should get you excited for this Netflix series' brand-new episodes.

Actor Diana Bentley has posted a few looks behind the scenes of the Ale House, where she's been goofing around with a few of her female costars. This marks one of the few pre-season sightings of the Ale House owner, Grace Emberly.

Breanne Hill's Instagram is a treasure trove of behind the scenes shots. Lots more Mary & Imogen moments show that those two will likely be tighter than ever in Season 2, both on and off screen. And in the caption from this Mary/Sokanon TBT, Hill writes, "spoiler alert we are totally dating in season 2. 💓Just kidding! Or am I..?" Now, dating? I doubt it. But there is a chance that the characters will be spending more time together this season.

First of all, that set looks awesome (and very appropriate for a series about fur trading). And it looks like the best way to keep from getting bored on a long Frontier shoot is a Monty Python sing-along.

According to THR, Brad Peyton, an executive producer, directed the second season premiere. Peyton credits this as "one of my basic rules of directing — sometimes you just have to get the hell out of the way," so I think this might be an image from Frontier Season 2, episode 1. And looks like Cobbs and Grant will be dueling it out.

Jeff Fierson captions this, "if you're enjoying Frontier, these two gents are the reason why. Our fantastic creators, Rob and Peter Blackie. Take a bow boys, you deserve this." If you have much better eyesight than I do, or perhaps the software from CBS procedurals that lets you "enhance" still photographs, maybe you can take a look at those scripts and the boards in the background and puzzle out if there are any Season 2 clues there.

It's confirmed that Jason Momoa be back, and here he's honoring his costume designer, who put together those impressively furry duds. And Momoa added, "I want Frontier Season 3 [...] lots of ideas."

Momoa hasn't shared too many pictures from filming, but don't doubt it — he's still excited about the upcoming season of the show, as are all of us fans.