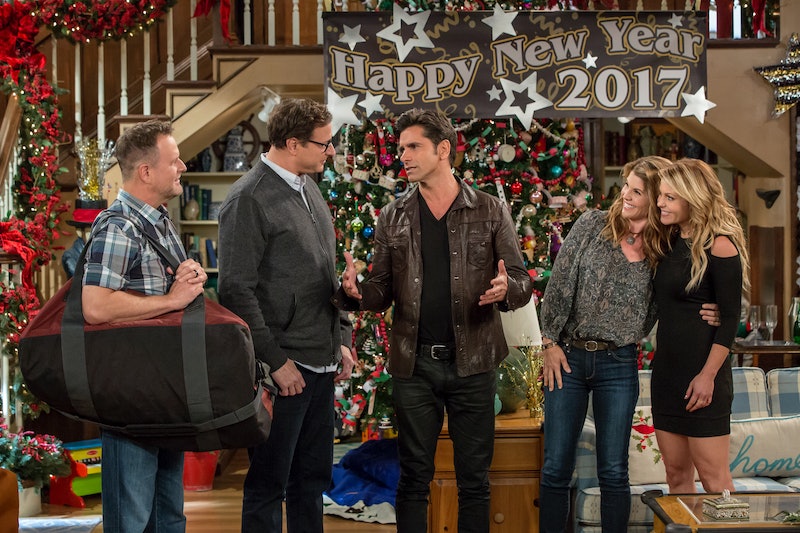 It's almost Christmas, and that means it'll be New Year's Eve before you know it. But if you're not the party-all-night type and more of the Netflix-and-stay-home variety, there's good news: Netflix is releasing special countdowns, including a Fuller House New Year's Eve countdown special, so you can start 2017 with the Tanners, Fullers, and Gibblers. According to a Netflix press release and the official trailer, the Fuller House countdown for New Year's Eve will drop on Dec. 28, so even if you're headed out on the holiday, you can still spend it with your favorite sitcom by celebrating 2017 in advance.

There's no word on what exactly will be included (or revealed) during the Fuller House countdown and, as you can see, the trailer mostly includes scenes from the Season 2 finale episode "Happy New Year, Baby." According to Netflix, all you need to do in order to spend your final moments of the year with the show is search "Countdowns" on the streaming service starting on Dec. 28 and you'll be able to find it. In addition to Fuller House, Netflix will also have New Year's Eve countdowns for their other shows, such as Trollhunters, Puffin Rock, Luna Petunia, and Skylanders Academy.

This isn't the first year Netflix has celebrated the new year with fun countdowns, but it's looks like it's the first year that they'll be producing one for adults, too. In 2014 and 2015, the streaming service gave kids their very own New Year's Eve countdowns from the children's programs Care Bears & Cousins, Inspector Gadget, and Project Mc2. According to a Netflix press release in 2015, 49 percent of parents in the U.S., United Kingdom, and Australia would rather do the New Year's Eve countdown at 9 p.m. rather than stay up until midnight.

Fuller House is a family-friendly sitcom that adults love and get nostalgic over, but get this — it can also be found on the "Kids" section of Netflix, if you've ever ventured over there. So you can be sure that not only will the Fuller House countdown be fun, it'll also be something you can enjoy with your whole family as well.

In fact, Fuller House star Jodie Sweetin spent last year's New Year's Eve doing an earlier Netflix coundtown and posted a photo of the family fun to her Instagram account. "We're doing our NYE countdown earlier tonight with the kids on Netflix!" she wrote in the caption. "So much easier! The kids chose to #partywithJulian tonight!" She's referring to the animated series All Hail King Julien, which features the King Julien the lemur from the Madagascar movies.

So the Fuller House New Year's Eve countdown sounds like a super fun option if you're craving more of the show after finishing up Season 2 — and if you want to say goodbye to 2016 in advance on Dec. 28.